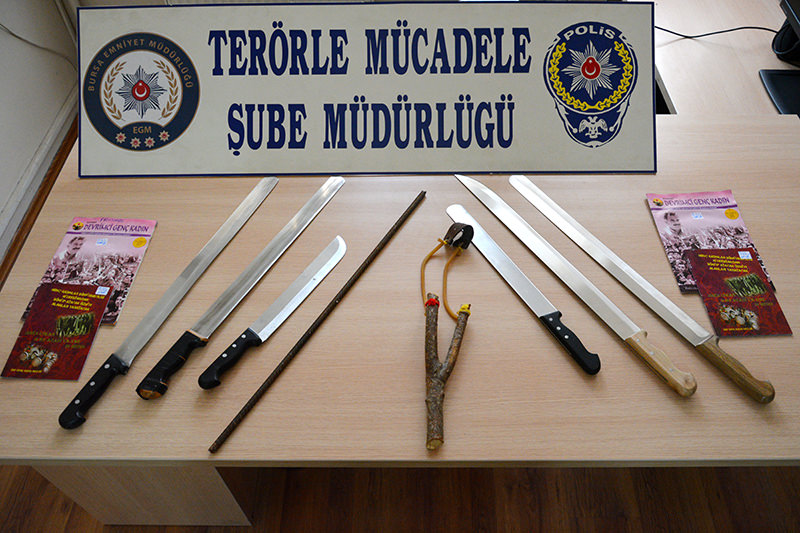 Sharp objects and explosives possessed by the YDG-H were confiscated by police in a previous operation on June 17 (AA Photo)
by Daily Sabah with AA Jun 24, 2015 12:00 am
Istanbul Police have detained 10 suspects in connection with outlawed-PKK's youth movement group (YDG-H) in operations carried out in four cities throughout Turkey.

According to reports, the operation was initiated by the counter-terrorism unit of Istanbul Police carried out operations in Okmeydanı and Beyoğlu districts. It aimed to prevent violent protests which were allegedly planned by the YDG-H.

Nine people were held in Ankara, and another one in Hatay. Officers also seized numerous documents used for propaganda by the organization in the raids.

A total of 16 individuals had been identified through testimonies from students, some of them blocked from taking their exams and some beaten by the group's members.

Police found that some of those detained had also engaged in PKK propaganda at the university, and taken part in street protests at various times and obstructed police officers.

The suspects were brought to Ankara police department, while the search continues for the six more who remain at large.

The PKK is recognized as a terrorist organization by Turkey, the United States, and the European Union. Turkey was long plagued by the PKK's bloody campaign of terror for Kurdish self-rule in the southeast that killed tens of thousands over three decades.