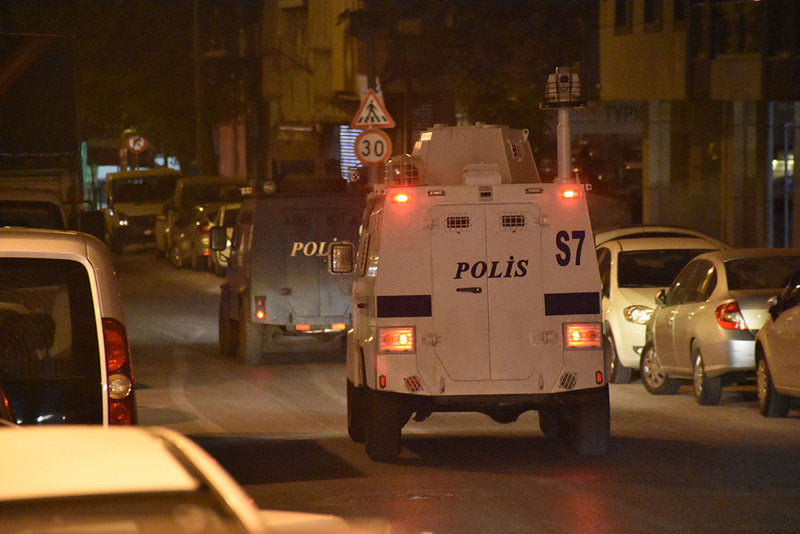 by Daily Sabah with Agencies Aug 12, 2015 12:00 am
Turkish police continued counter-terrorism operations against the outlawed PKK and ISIS militant groups through raids conducted on early Wednesday.

19 suspects were detained in simultaneous raids through Turkey, including in Istanbul's Küçükçekmece district. Armed vehicles and helicopters also took part in the raid carried out in Küçükmece's Kanarya neighborhood, which is known as an area with the PKK's presence.

Dozens of rounds of ammunition, organizational documents and three unlicensed guns were seized in the operation which was conducted on 15 different locations in the district.

The suspects were accused of holding unauthorized demonstrations in support of the PKK and throwing Molotov cocktails at some premises and vehicles.

Meanwhile, 12 suspects were detained in a separate operation conducted against ISIS in four provinces.

The PKK claimed responsibility for Monday's suicide bombing and a subsequent armed attack on a police station in the Sultanbeyli district of Istanbul. One policeman died and at least 10 people, including three police officers, were wounded in the attack.

Shots were also fired at the U.S. consulate in Istanbul in an attack claimed by an armed ultra-leftist group called the Revolutionary People's Liberation Party-Front (DHKP-C).

Since July 24, around 1,600 people have been arrested in a wave of counter-terrorism raids, amid a spike in attacks targeting police and the army after a July 20 deadly suicide bombing in the southeastern Suruç district which killed 32 civilians.

Police have been carrying out nationwide anti-terror operations to apprehend suspected PKK, ISIS, and DHKP-C militants-all three are designated terrorist organizations in Turkey.