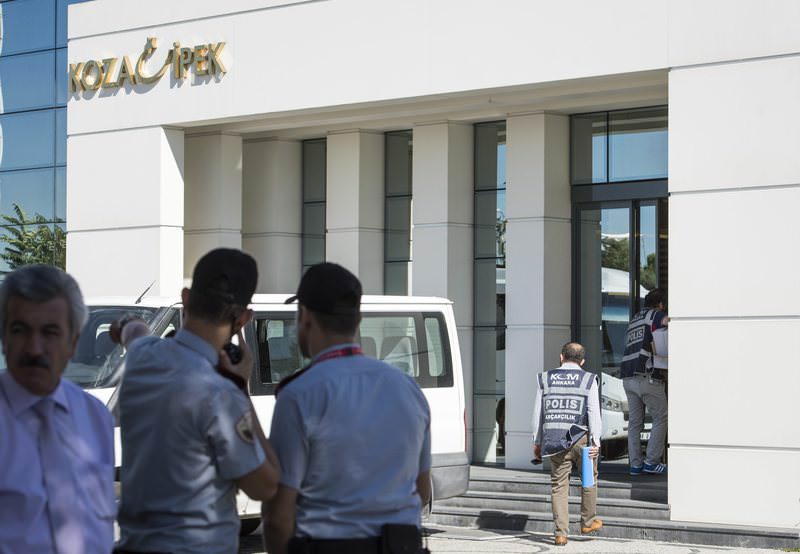 by Daily Sabah Sep 02, 2015 12:00 am
All seven people who were detained as part of an operation into Gülen-affiliated Koza İpek Group on Monday have been released on Wednesday after giving testomonies to the prosecutors.

The holding is suspected of providing financial support and distributing propaganda of what government officials call the Gülenist Terror Organization (FETÖ), police sources said, which is led by U.S.-based Turkish imam Fethullah Gülen who lives in self-imposed exile in rural Pennsylvania.

During the search, the police confiscated documents and computers belonging to the holding company. Seven people have been detained and an arrest warrant issued for Akın İpek, the group's chairman, who the source said was thought to be in the U.K.

The raid on Koza İpek Holding's 23 companies did not include its media organizations, sources from the prosecutor's office told Anadolu Agency (AA). Newspapers owned by the group said the raids were conducted against the "İpek Media Group" but did not specify the offices of individual news outlets.

The Gülen Terror Organization is accused of conspiring against the state, wiretapping thousands of people including government officials and encrypting phones. The organization has been labeled a threat against the country's national security. Government officials have continuously expressed their determination to continue to lawfully fight against the Gülen Terror Organization, which has been accused of trying to topple the democratically elected government through its operatives in the judiciary and the police. Moreover, the organization has been defined along the lines of "civilian elements attempting to take over the state by unlawfully organizing within state institutions" in the Red Book, a legal document that contains the country's security threats, since January 2015.
Last Update: Sep 03, 2015 10:43 am
RELATED TOPICS