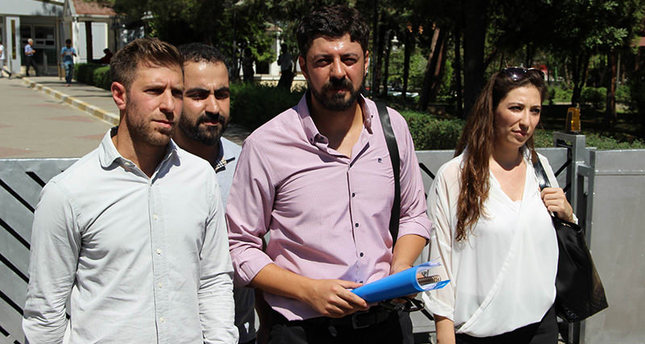 The lawyer of British journalists and executive assistants of Vice News came to the prosecutoru2019s office and submitted a petition for their release (u0130HA Photo)
by Daily Sabah Sep 03, 2015 12:00 am
Two British Vice News journalists who were arrested in Turkey on charges of having links to ISIS, have been released on Thursday, while an Iraqi guide and translator is still under arrest.

British journalists Jake Hanrahan and Philip John Pendlebury, along with their translator Mohammed Ismael Rasool, were detained on August 27 and arrested on September 1 in Turkey's southeastern province of Diyarbakır.

The Diyarbakır Second Criminal Court's earlier decision to arrest the journalists reflected police's concerns about multiple contradictions in the defendants' testimonies and the discovery of a military-grade encryption system on one of the suspect's personal computer, whose contents he refused to decrypt for official review. According to cyber security experts, the encryption system is commonly used by ISIS members, the sources had said.

A Turkish court on Tuesday ordered the arrest of two U.K.-based Vice News journalists on charges of alleged links with the ISIS terrorist organization. Stressing that Turkey has begun launching airstrikes in Syria as part of the anti-ISIS coalition and the organization has issued several threats against the country, sources had said that authorities had no choice but to remain firm on terror suspects.

Turkey has previously come under criticism with claims that there are dozens of journalists under arrest in the country, but according to Turkish officials, there are only seven journalists under custody, and the reason for their arrest is terrorist activities. Most journalists who were detained at the first place were allegedly arrested by Gülen Movement-linked judges and prosecutors, said Turkish officials.
Last Update: Sep 03, 2015 3:58 pm
RELATED TOPICS