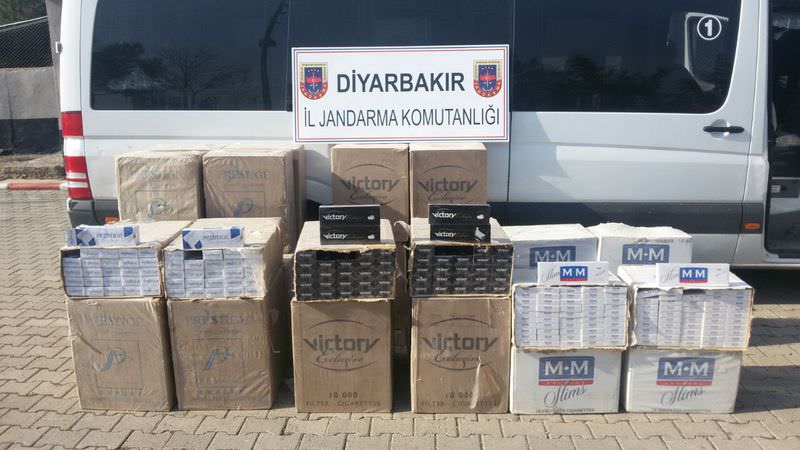 by daily sabah Sep 26, 2015 12:00 am
The most profitable source of income for the PKK terrorist organization is smuggling cigarettes, the recent report by Turkish security sources revealed as the report said that 80 million packets of smuggled cigarettes have been seized by the security forces in the first eight months of 2015.

Security sources also added that the 80 million packets of smuggled cigarettes have a value of over 500 million Turkish liras.

Five million of the smuggled cigarettes have been seized by authorities in Istanbul. Directorate of Anti-Smuggling officers have detained 300 suspects of smuggling in 160 operations across Turkey in the first eight months of 2015.

The report said that 20% of the cigarettes sold in Turkey in 2013 were smuggled, while the percentage dropped to 11% in 2015. It also added that the biggest source of profit for the terrorist organization is smuggling.

Security sources said that the smuggled cigarettes the PKK is trading are Bulgarian-made and they are made to look like as if they were being exported to neighboring countries and are shipped to the Port of Mersin in eastern Turkey and then sent to several spots in Syria and Iraq. A large quantity of these cigarettes are then smuggled back into Turkey from Syria and Iraq as if they were imported.

The PKK has recently started using Georgia as the new route for smuggling. Sources stated that the militants use the same method for smuggling. The smuggled cigarettes sent to Georgia are smuggled back to Turkey via the Sarp Border Gate as if they were imported.

The PKK is known for drug trafficking and smuggling for its income. It has been stated many times by security sources that PKK controls a big part of drug traffic and smuggled tobacco products in Turkey.

The PKK is recognized as a terrorist organization by Turkey, the U.S., and the EU.

Formed in 1978, the terrorist group which also aims civilians in its attacks had been fighting the Turkish government for an independent state until the early 2000's. The group then shifted its goal to autonomy in predominately Kurdish inhabited regions of Turkey.
Last Update: Sep 26, 2015 7:27 pm
RELATED TOPICS