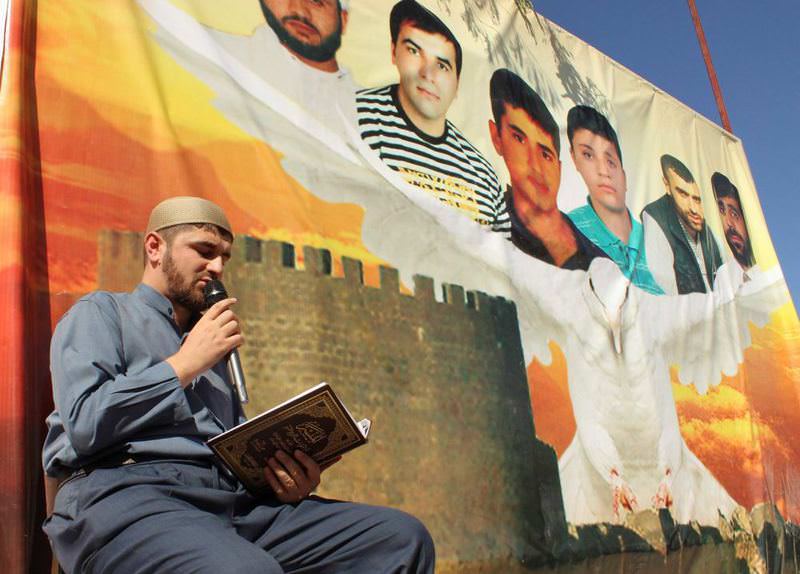 The trial of 34 people accused of killing three young men working as aid workers for a charity in the southeast by a pro-PKK mob last year is set to start today amid overwhelming public interest in the case, according to lawyers for the victims' families

Almost one year after the killing of Yasin Börü, 16, Hakan Gökgöz, 26, and Hüseyin Dakak, 19, by a pro-PKK mob in the southeastern city of Diyarbakır, the trial in which 34 people are accused of the killings is scheduled to start today in Ankara.

Börü, the youngest victim, has become a symbol of peace and an embodiment of the PKK's indiscriminate attacks on civilians. Thus, today's trial is expected to attract a huge crowd, including representatives of various nongovernmental organizations.

The remains of Börü, Gökgöz and Dakak, who were killed on the second day of the Kurban Bayram holiday, as they distributed food aid to Syrian refugees, were found after they were attacked by PKK supporters who claimed their victims supported ISIS, police officials said. The three young men were working for a charity helping the poor and found themselves in the middle of an angry mob of PKK supporters who were rioting during aid delivery. The three young men took shelter in an apartment building, but the mob found their way inside, beating, stabbing and torturing the three. Börü's face was beyond recognition when the bodies were discovered after the riots ended.

The trial will be held at the 2nd Heavy Criminal Court in Ankara after a court in Diyarbakır asked the hearing to be relocated, citing security concerns in the province where the PKK poses a major threat, especially after recent attacks targeting security forces and civilians. Some 100 lawyers, representatives from nongovernmental organizations and political parties are expected to attend the first hearing.

Abdulgani Orhan, a lawyer for the plaintiffs, said a social media campaign was launched to stir up public interest in the case, and jurists and activists had already indicated that they would be present at the trial. "A massacre happened, and we invite fellow lawyers to attend the trial so that they can see whether there is a fair trial [or not]," he told Anadolu Agency.

The indictment asks for five separate aggravated life sentences for 34 defendants, including eight released pending trial, for torturing victims to death and harming the unity of the state, a description attributed to PKK-related crimes.

The killing of the three young men happened amid two days of riots on Oct. 6-7 instigated by the PKK after a call by the Peoples' Democratic Party (HDP), which is known for its close ties with the terrorist organization. The HDP had called upon their supporters to take to the streets in support of Kobani, a predominantly Kurdish town in Syria, which was besieged by the militants of the Islamic State of Iraq and al-Sham (ISIS). The protests quickly evolved into riots by pro-PKK groups targeting everyone they deemed to be ISIS supporters in the southeast, particularly conservative Kurds and Muslim charities like the one the three victims had worked for. Börü, Gökgöz and Dakak were distributing aid to Syrians who fled Kobani.

The violence after the HDP call left 34 people dead across Turkey, 12 of them in Diyarbakır.
RELATED TOPICS