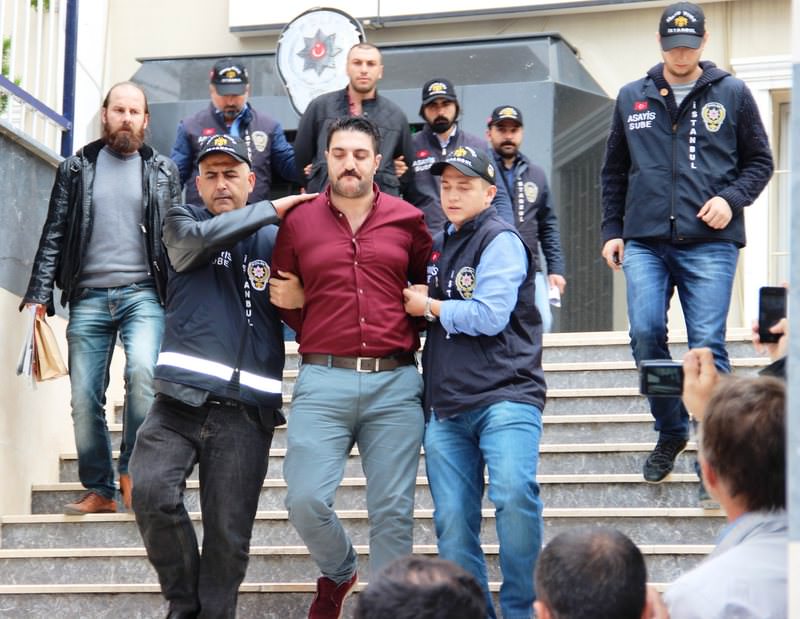 Turkish Police take the suspects in the attack on journalist Ahmet Hakan to Istanbul Security Directorate's public security department Oct 1, 2015. (IHA Photo)
by Anadolu Agency
Oct 06, 2015 12:00 am
Prosecutors in Istanbul on Tuesday objected to the release of six men suspected of attacking Ahmet Hakan Coskun, a columnist for the Hurriyet newspaper and TV host.

The chief public prosecutor's office told Anadolu Agency it had protested about the decision by the Istanbul 6th Criminal Court of Peace - a low-level court that initially deals with criminal cases.

The court had freed six suspects while detaining one - Ahmet Senguler - on Monday.

He was assaulted on October 1 by four attackers as he was about to enter his home in Istanbul's Nişantaşı neighborhood. He suffered a broken nose and ribs.

The seven suspects were referred to the court by the Anti-Terror and Organized Crimes Bureau of the prosecutor's office.

Three of the suspects were expelled from the Justice and Development (AK) Party after it was found that they were linked to the attack.

Last month, Hürriyet's and Daily Sabah's offices in Istanbul were attacked by Nationalist Movement Party (MHP) supporters, during a rally organized by the party's youth branches on Monday, September 7, or not supporting MHP's position against recent terrorist attacks in Turkey's eastern and southeastern regions.