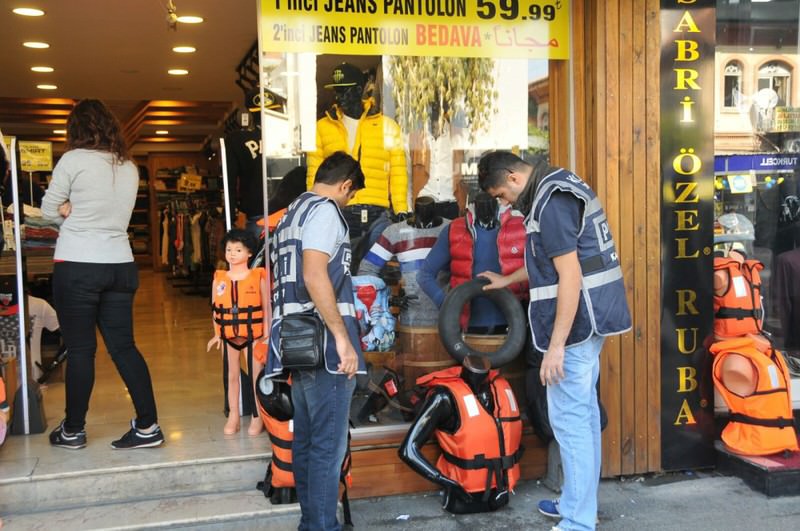 Police officers inspect life vests sold in a department store in u0130zmir. Life vests are ubiquitous in the city where their trade proved lucrative for local businesses.
by Daily Sabah with Wires Oct 07, 2015 12:00 am

Fake life vests, sold cheaply to refugees setting off on the potentially lethal sea journey to the Greek islands from the Turkish coast, have recently become a hot commodity. A new market for fake goods had thrived in İzmir, a western Turkish city where refugees, mainly from Syria, converge before leaving for Greece by sea.

Police and officials from a government agency tasked with inspection of goods launched a crackdown on sellers and makers of fake life vests the previous day. Shops selling life vests in İzmir's central Basmane district, a hub for Syrian refugees, were raided and thousands of fake life vests tagged with names of registered brands were discovered in several warehouses. More than 1,300 life vests were confiscated and authorities said further raids would be carried out. Sellers of the vests are fined TL 1,800 ($602) per life vest confiscated by police. Eleven people were also detained for the sale of fake vests. A Syrian man caught selling life vests said he sold each for TL 35, far lower than the original vests, which are sold for prices up to TL 100.

In one raid, police officers found a large number of fake life vests stored in an empty shop at a business complex. The shop's windows were covered with paper to avoid detection. In other raids, police found that life vests were sold at grocery stores and an electronics store. Media reports said a gang of five was behind the mass production of fake life vests and the vests were manufactured secretly in workshops originally manufacturing shoes and handbags.

Refugees' only lifelines on the risky journey to Greece are their ability to swim and life vests. Since swimming is of no help due to worsening weather conditions, life vests come in handy for migrants. Impoverished migrants are tricked into buying cheaper fake life vests filled with sponge that absorbs water rapidly and leads to drowning. According to statistics, 72 people drowned last month on journeys to the Greek islands from the Turkish coast.

In İzmir, almost every shop, ranging from department stores to grocery stores, has life vests for sale, and Syrians carrying black bags containing life vests are a common sight in the city. Authorities implemented several measures in recent weeks to stop the steady flow of refugees in the city. Life vests are collected from refugees who are sent to refugee camps in southern Turkey. Still, some Syrian refugees preferred to stay in the city, hoping they would be able to board a boat to Greece if the Coast Guard does not intercept them first.

Sales of rubber boats also dramatically increased in proportion to the influx of refugees to western Turkish towns, according to reports. Sellers say they run out of stock, while the price of rubber boats went up to TL 5,000 due to high demand, from as low as TL 1,000.Every day refugees wait in seaside towns on the Aegean coast, a more than 2,600 kilometer coast stretching from the province of Çanakkale in the north to Muğla in the southwest. At night and sometimes in broad daylight, they hop onto the rafts arranged by smugglers to travel to the Greek islands lying a few kilometers away from the Turkish coast. The small inflatable boats are capable of carrying four people, but desperate migrants who risk capsizing the boat travel in the dozens. Though a few boats make it to the Greek islands daily, the rest of the scores of boats usually end up capsizing, with refugees struggling to swim to safety.

According to figures from the Turkish Coast Guard, more than 60,000 people were intercepted on the Aegean and Mediterranean Seas this year since January and at least 130 people died when their boats capsized and sank.
RELATED TOPICS