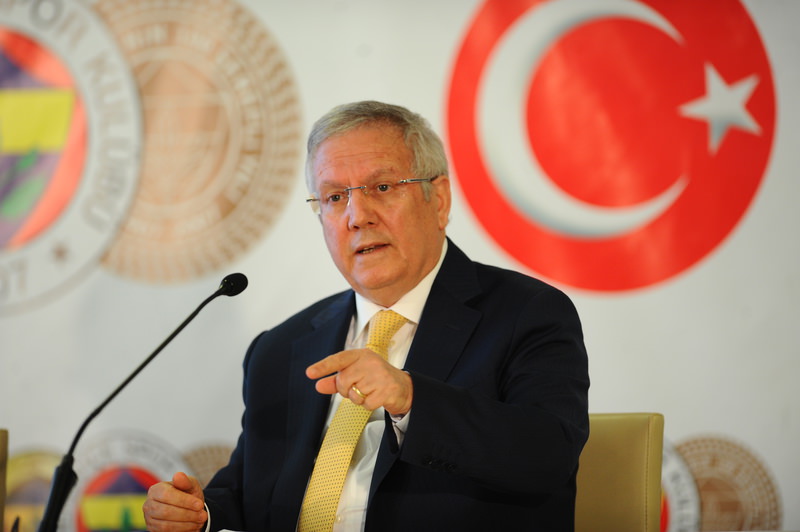 by daily sabah
Oct 09, 2015 12:00 am
The chairman of the Fenerbahçe football club, Aziz Yıldırım and six other suspets have been acquitted on Friday of all charges on match-fixing, two years after Yıldırım was released from prison in the case he claimed to be "a plot" against him by the Gülen Movement.

Prosecutors Monday asked a court to acquit the 62-year-old boss of Fenerbahçe, who has been presiding over the Istanbul-based club since 1998, and six other suspects, Olgun Peker, Cemil Turan, Korcan Çelikay, Şekip Mosturoğlu, Mecnun Odyakmaz and Tayfur Havutçu.

Yıldırım had served one year in prison after he was sentenced to six years and three months three years ago following an inquiry that found him and several other Fenerbahçe executives guilty of match-fixing and running a criminal organization. He was released pending trial and had started a legal battle until he was granted a retrial last year.

His conviction for match-fixing in the 2011-12 season rocked the Turkish football world though Yıldırım adamantly denied the charges and blamed the "parallel structure," a name given to the Gülen Movement led by U.S-based cleric Fethullah Gülen, for his imprisonment. Fenerbahçe was banned from competing in European football events for two seasons after his conviction.

In an August interview with Turkish media, Yıldırım slammed prosecutors linked to the Gülen Movement, claiming they fabricated the allegations against him in the case.

Yıldırım said he was facing a life sentence, according to an indictment drafted in 2011 and based on an article in the Constitution that did not seek veritable evidence to convict those involved in fraud and other wrongdoings in sports such as match-fixing.

The match-fixing trial was the culmination of an investigation by Prosecutor Zekeriya Öz. Öz, allegedly linked to the Gülen Movement, which is accused of attempting to overthrow the government, remains at large after an investigation into the movement led to the issuing of arrest warrants for Öz and another prosecutor. Both prosecutors were involved in a probe and sought to imprison top government officials purportedly under the guise of an anti-graft inquiry in 2013.