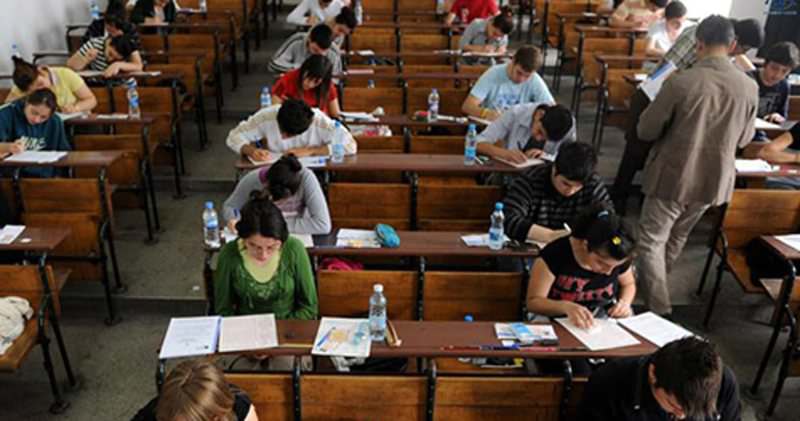 An inquiry is shedding light on how the Gülen Movement infiltrated state agencies, as three suspects linked to the movement who were employees of a state agency tasked with supervising a civil servant exam have been detained

Three suspects interrogated by prosecutors in Ankara may reveal how the notorious Gülen Movement, accused of trying to overthrow the government through infiltrators in the judiciary and law enforcement, wielded influence. The suspects detained on Thursday are three employees of a state-run body in charge of a civil servant exam where a massive cheating scandal occurred five years ago. The Gülen Movement is accused of supplying the questions and answers of the exam to its followers.

The detentions come at a time when Ankara is stepping up its fight against the Gülen Movement with a purge of its point men in security agencies and the courts a few years after a series of trials saw the imprisonment of hundreds by Gülenist judges. The inquiry into cheating on the Public Personnel Selection Exam (KPSS) was launched earlier this year. Although having an unassuming name, the exam is the only way to be hired by state-run agencies, barring a few exceptions. Accordingly, it has been a favored option for Gülenists seeking easy access to key posts in the bureaucracy. What distinguished the three new detentions from earlier ones was that the suspects were all employees of a state-run body tasked with preparing the questions for the KPSS, which hundreds of people are believed to have cheated on in 2010.

Details in reports about the investigation showed the administration of Measurement, Selection and Placement Center (ÖSYM), a state-run body that organizes the KPSS, university admission exams and many other exams, hired the three suspects for the department where exam questions are prepared. The suspects were hired during the tenure of former ÖSYM director Ali Demir, who retired from the post in March and was interrogated earlier during the KPSS inquiry.

Moreover, reports in Sabah daily claim the suspects had regularly contacted a prominent Gülenist implicated in the cheating scandal and funneled about TL 1.5 million ($520,940) to his bank accounts, apparently as "himmet," a name given to donations and money extorted by blackmail by the Gülen Movement.

The suspects themselves may have cheated their way through the exam they took for employment as two of them answered all questions correctly in the 2010 exam, though they failed to pass the exams over a period of 10 years previous to their success. Two years later, they were admitted to ÖSYM.

Sabah reported that an investigation was underway on whether more suspects linked to Gülenists were hired by ÖSYM after passing the exam.

The prosecutor's office asked an Ankara court to issue an arrest warrant for the three suspects on charges of membership in a criminal organization, fraud and forgery.

According to the report in Sabah, CDs and notebooks containing questions that were supposed to be kept secret at ÖSYM were found in the residences of the suspects. They were also linked to two Gülen Movement imams, a name used to describe members who purportedly command fellow followers in state agencies, the police, judiciary, army and others official organizations.

The new development overshadowed exams in the past five years. It is unclear whether the suspects helped more Gülenists pass the exam and it is suspected that there are more people linked to the movement working at ÖSYM.

It was found that 350 people answered all 120 questions in the 2010 exam correctly, with 70 of them found to be couples and 52 others discovered to be living either in the same apartment building or on the same street. Most of them had scored very low marks on previous exams.

Baki Saçı, who was among the suspects detained in an earlier wave of operations into the KPSS cheating scandal, confessed that senior movement member, Berat Koşucu, who fled the country earlier this year, sent him the questions for the 2010 KPSS a day before the exam. In his testimony, Saçı reportedly said that Koşucu had called him to tell him to check his email. "I have a gift for you," he reportedly told Saçı, who had no access to the Internet in his village. The suspect added that he called a friend, Mustafa Süleyman İnanç, a jeweler in the town, and asked him to access his inbox so that he could have a copy of the questions as well. İnanç, who was also detained in the KPSS operation, had reportedly given the same statement in his testimony.

The investigations in March and this summer netted 230 suspects and an indictment is reportedly being prepared for suspects on charges of running a criminal gang, forgery of official documents, defrauding public institutions, destroying evidence, abuse of duty and acquiring and disclosing confidential information. Gülenists have earlier faced similar accusations for supplying answers to other exams, facilitating infiltration by fellow Gülenists of public institutions.

According to the indictment leaked to the media, the prosecutor says Hanefi Sözen, head of a nongovernmental organization, is the leader of the gang involved in the massive fraud. Sözen, who is reportedly a close confidant of the movement's leader Fethullah Gülen, fled abroad while the investigation was underway.

Several prime suspects including directors of prep schools and the president of a university linked to the Gülen Movement remain at large.

The indictment says tangible evidence exists to prove the fraud was an organized crime. Rather than simple cheating, defendants are accused of acquiring illegal gains by exam fraud, referring to salaries received after employment as civil servants.

The indictment also highlights that suspects worked in schools and companies linked to the newly coined Gülenist Terror Organization (FETÖ), a name used in the indictment for the group the members involved in illegal activities were in.
Last Update: Nov 07, 2015 1:31 am