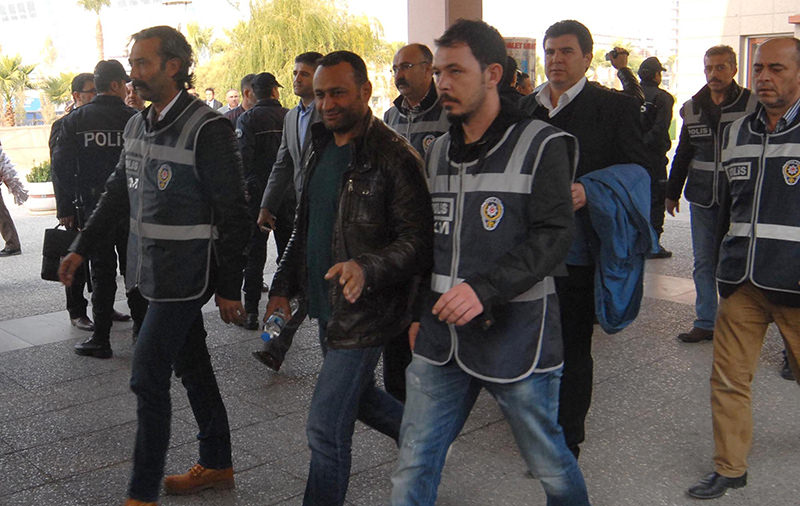 | DHA Photo
by Daily Sabah Nov 09, 2015 12:00 am
Seventeen suspects including police chiefs affiliated with the Gülen Movement, have been arrested early Monday, as part of the ongoing "parallel state" operation in western Izmir province, where 44 suspects were detained on November 3.

The suspects were arrested for 'acting outside of their legal authority' in relation to a 2012 espionage case which involved members of the Turkish military.

The remaining 19 suspects have reportedly been released, while the suspects who were arrested were sent to jail.

Ali Bilkay, who served as the police chief in Izmir between November 10 2011 to February 12, 2014 and Mehmet Ali Şevik and Taner Yıldız, former deputy police chiefs of the organized crime unit, and inspectors Ferda İleri and Ahmet Kaya were amongst the suspects who were arrested in the operation.

According to the government, the "parallel state" refers to a purported group of bureaucrats and senior officials embedded in the country's institutions, including the judiciary and police, who are allegedly trying to undermine the elected government. The ongoing operation against the "parallel state" has resulted in the detention of dozens of police officers and the reassignment of hundreds of other officers across Turkey.

The structure is led by U.S.-based fugitive Fethullah Gülen, who is also the leader of "Gülenist Terror Organization" (FETÖ) that is said to have penetrated the Turkish state, particularly the criminal justice system, in a bid to overthrow the current government.

The Gülen Movement is accused of carrying out illegal wiretapping and terrorist activities to bring down the democratically elected government. Its members are believed to have infiltrated government institutions such as the police and judiciary to be able to conduct operations against what it considers a foe.

Recently, Gülen has been listed among Turkey's most wanted terrorists by the Interior Ministry. Apart from Gülen himself, 10 more were listed as wanted terrorists. The Gülen Movement has been numerously exposed for its illegal espionage activities.
Last Update: Nov 09, 2015 8:59 pm
RELATED TOPICS