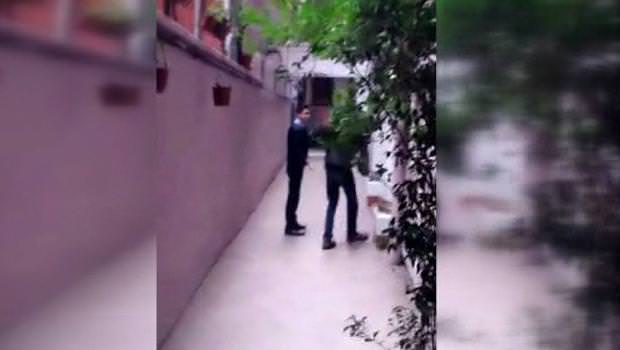 | From the video footage
by daily sabah
Nov 11, 2015 12:00 am
Two police officers have been suspended from duty after they slapped a university student in Istanbul's Beyoğlu district, the city police department said on Wednesday.

The incident occurred on Oct. 30 in one of the by-streets of the famous İstiklal Avenue in Beyoğlu. Following a verbal argument between a police officer and a university student, the policeman gave the student a hard slap across the face, as was recorded on amateur camera. The police officer then led the student to his other police friends, where one of them pushed him back with his hands and swore at him.

As the quarrel continued, one of the police officers said, "Who the hell are you, you little kid," further adding, "File a complaint to wherever you want."

The video footage of the incident resonated on media on Tuesday, with many showing reaction to the police officers. Accordingly, the Istanbul police department released an announcement on Wednesday, saying: "Regarding the news reports published on media on Nov. 10 with the title 'Police slapped university student in Beyoğlu,' authorities have launched a disciplinary proceeding for them to be suspended from duty."
Last Update: Nov 11, 2015 3:39 pm