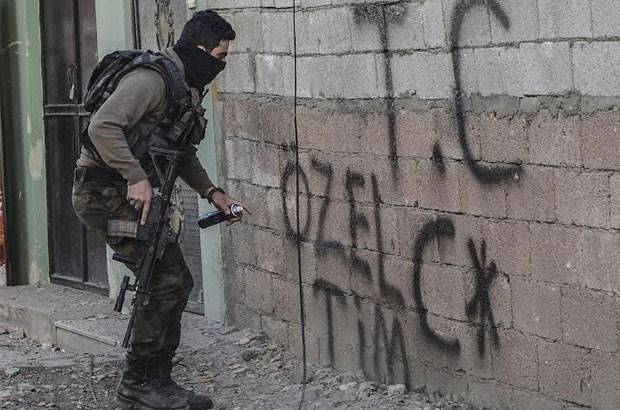 by daily sabah
Nov 18, 2015 12:00 am
The Interior Ministry has ordered on Wednesday an investigation be launched into graffiti written on some of the walls of the houses in Turkey's southeastern Silvan district, which was under curfew at the time of the incidents.

The graffiti are said to have been taken note by the operations teams at the region, which were there undertaking anti-terror operations against the PKK terrorists during the latest curfew lasting from Nov. 3 to Nov. 14.

On one of the walls, it was written, "Either be a Turk and be proud, or if you are not a Turk, learn to obey," whereas on another one read, "You will see the power of Turks and the Turkish State!"

The photographs of the above-mentioned writings were previously widely shared on media agencies.

The Interior Ministry has on Wednesday ordered Diyarbakır Governorship to start an investigation regarding the incident.
Last Update: Nov 18, 2015 3:06 pm