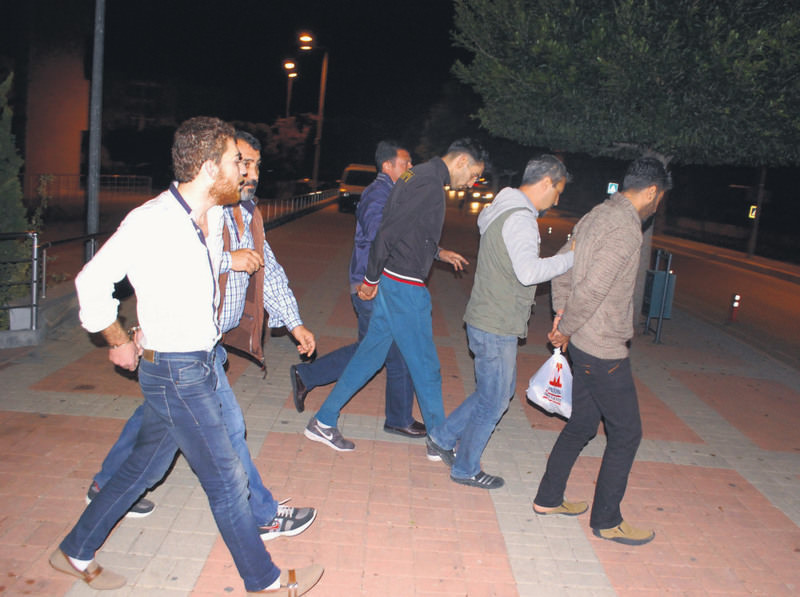 Belgian citizen of Moroccon origin Dahmani (right) is believed to have been in constant contact with the mastermind of the Nov. 14 Paris attack Abdelhamit Abaoud.
by Daily Sabah with Wires Nov 23, 2015 12:00 am

A Belgian national detained with two Syrians on Nov. 16 near Antalya is suspected of planning an attack on the G20 summit. France is also pursuing the Belgian's extradition for involvement in the Paris attacks

Turkish police in Antalya detained a 26-year-old Belgian citizen of Moroccan origin on Friday for suspected involvement in the Nov. 14 Paris attacks by terrorist organization DAESH and planning an assault on G20 leaders. Officials said he was apprehended close to the southern resort city of Antalya together with two Syrian nationals while trying to cross into Syria. Ahmad Dahmani is accused of being in contact with the terrorists who carried out the attacks in Paris that killed 130 people and were claimed DAESH, a Turkish official said on Saturday. "The security forces stated that Dahmani is a DAESH militant who was preparing to illegally cross the Turkish-Syrian border," said the official.

"We believe that Dahmani was in contact with the terrorists who perpetrated the Paris attacks," the source added, without giving further details. "The investigation continues."

Dahmani is said to be held in confinement, and an examination of his cellphone showed that he was in contact with the main organizer of the Paris attack Abdelhamit Abaaoud, who was killed last week in Paris in a firefight with the French police. The two were in daily contact before and on the day of the attacks in Paris, the cellphone records showed. Dahmani, in his testimony to the prosecutor, said he had seen Manavgat on a postcard two months ago and had purchased a cheap package deal. Dahmani, who is a boxer, is believed to have traveled extensively across Europe under the guise of organizing sports competitions.

Pictures showed Dahmani, wearing a Ferrari sports jacket and with his hands behind his back, being led away by plain-clothes police.

The Doğan news agency reported earlier that Dahmani had carried out reconnaissance work to scout out targets for the attacks in Paris. However this was not confirmed by the government official.

Counterterror police had followed Dahmani after he arrived at Antalya's airport on Nov. 14, the night of the Paris attacks, and checked into a five-star hotel in the luxury resort of Manavgat to the east of the city. The police then detained him and the two Syrians, who the report said had been tasked by the DAESH leadership to supply him with a fake passport and take Dahmani to safety in jihadi-controlled Syria. The two Syrians, Ahmed Tahir, 29, and Muhammed Verd, 23, were under surveillance since crossing into Turkey from Syria with a private car. All three were arrested on Nov. 16.

All three were taken to court and are in prison, the official added.

Antalya had only one week ago hosted – under the heaviest security – the annual Group of 20 (G20) summit of world leaders including U.S. President Barack Obama and Russian leader Vladimir Putin.

Reports said Dahmani was planning an attack during the G20 Leaders Summit in Antalya that was held on Nov. 15-16.

Ankara has repeatedly urged European states to fully share intelligence on suspected extremists and Turkish officials accused the Belgian authorities of falling short on this occasion.

Turkish officials said the police arrested Dahmani based on information from Turkish intelligence services, not from foreign partners.

Turkey has issued entry bans for some 26,600 suspected jihadis largely based on intelligence issued by allies, according to government data. But Turkey had no entry ban flagged for Dahmani as there was no record of the Belgian authorities warning about him.

"Had the Belgian authorities alerted us in due time, Dahmani could have been apprehended at the airport," said the official.

"We urge our allies to continue sharing information with us," said the official.

France has asked for Dahmani's extradition, accusing him of being among the organizers of the Paris attack. Dahmani reportedly scouted out targets for the Paris attacks, which saw gunmen and suicide bombers target bars, restaurants, a rock concert and the national stadium.
RELATED TOPICS