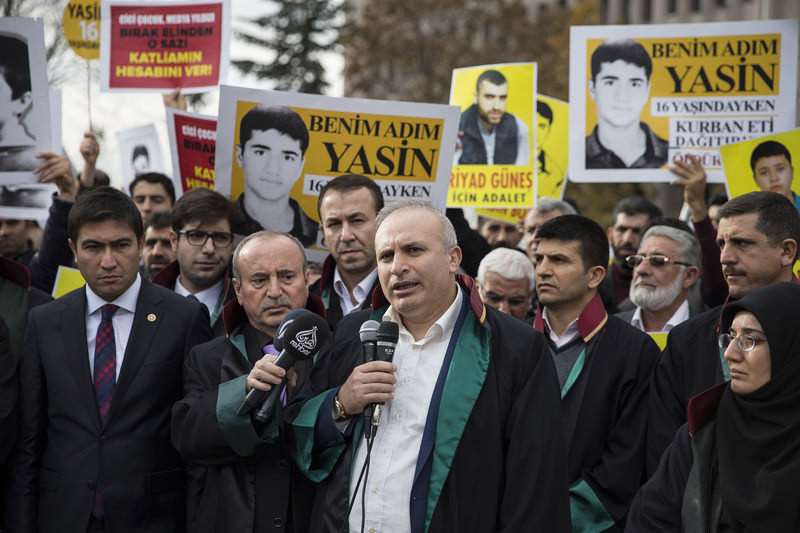 As the second trial of defendants accused of killing 16-year-old Yasin Börü was concluded Wednesday, four of the 34 suspects linked to the PKK – which are accused of not only murdering Börü but also two other young men in the southeastern Turkish city of Diyarbakır last year – were released.

The trial was held at the 2nd Heavy Criminal Court in Ankara after a court in Diyarbakır asked on Oct 5 that the hearing to be relocated, citing security concerns in the province where the PKK poses a major threat, especially after recent attacks targeting security forces and civilians.

The indictment asks for five separate aggravated life sentences for 34 defendants, including eight released pending trial, for 'torturing victims to death' and 'harming the unity of the state'.

About 100 lawyers and representatives from nongovernmental organizations attended the first hearing.

Yasin Börü and his friends (Hakan Gökgöz, 26, and Hüseyin Dakak, 19) were mugged and killed while handing out meat prepared by a voluntary union for the poor during the Eid al-Adha (Feast of Sacrifice).

The killing of the three young men happened amid two days of riots on Oct. 6-7 instigated by the PKK after a call by the Peoples' Democratic Party (HDP), which is known for its close ties with the terrorist organization. The HDP had called upon their supporters to take to the streets in support of Kobani, a predominantly Kurdish town in Syria, which was besieged by Daesh militants. The protests quickly evolved into riots by pro-PKK groups targeting everyone they deemed to be Daesh supporters in the southeast, particularly conservative Kurds and Muslim charities like the one the three victims had worked for. Börü, Gökgöz and Dakak were distributing aid to Syrians who fled Kobani.

34 people were taken into custody regarding the deaths of Yasin Börü and his friends, 21 of whom were arrested. The investigation continues