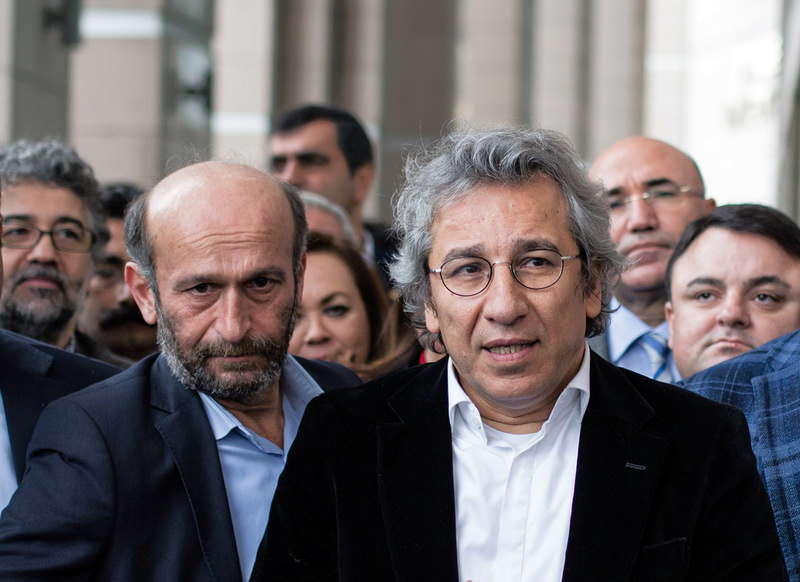 by daily sabah
Nov 26, 2015 12:00 am
A public prosecutor referred Cumhuriyet daily Editor-in-Chief Can Dündar and Ankara Representative Erdem Gül to court with an arrest demand on Thursday for unlawful publications regarding the illegal search conducted on trucks belonging to Turkey's National Intelligence Organization (MİT). Later on the same day, the two were arrested on grounds of supporting terror and espionage.

Dündar and Gül were charged with "providing documents regarding security of the state", "political and military espionage", "releasing secret documents" and "propaganda for terror organization."

The trucks were stopped in early January, 2014, in southern Adana province while they were carrying supplies to Turkmens of Bayırbucak region northern Syria's Latakia according to government officials. The raid against the trucks was allegedly carried out by officials linked with the controversial Gülen Movement with the purpose of undermining the government's reputation on international area.

An investigation was launched against the raid, and while the investigation was underway, Cumhuriyet daily, later joined by several other media institutions, unlawfully published the footage regarding the content found in the raid.

At the time of the raid, the footage regarding the operation and treatment of MİT officials were broadcasted, receiving heavy criticism from the government and the public.

Following Friday's cabinet meeting, Deputy Prime Minister Numan Kurtulmuş stated that arrests in such cases should be avoided until the final decision of the court.

The U.S. State Department also criticized the arrests through the statement of Deputy Spokesperson Mark Toner released on Friday. "We are troubled by the pre-trial arrest yesterday of senior editors of the respected Turkish newspaper Cumhuriyet. The investigation, criminal charges, and arrest raise serious concerns about the Turkish government's commitment to the fundamental principle of media freedom. These events are only the latest in a series of judicial and law enforcement actions taken under questionable circumstances against Turkish media outlets critical of the government. We call on Turkish authorities to ensure that all individuals and organizations – including but not limited to the media – are free to voice a full range of opinions and criticism, in accordance with Turkey's constitutional guarantees of media freedom and freedom of expression. This will ultimately strengthen Turkey's democracy." the statement said.
Last Update: Nov 28, 2015 2:48 pm