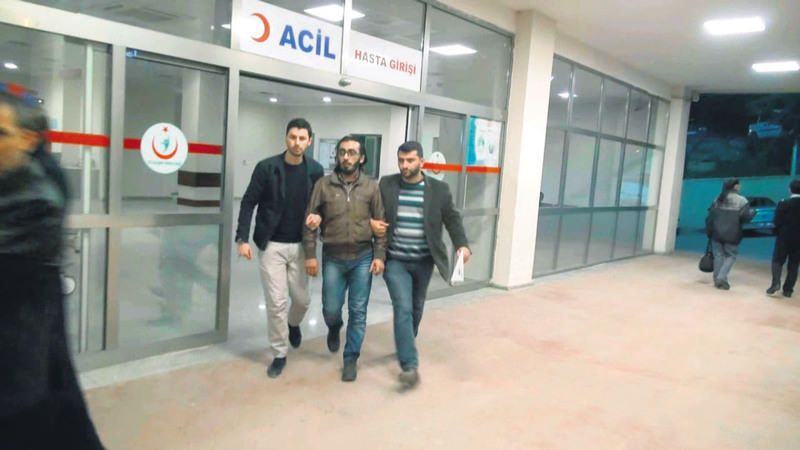 Two police officers escort Muhammad al-Rasheed after a medical examination following his arrest in u015eanlu0131urfa in March.
by Daily Sabah Dec 03, 2015 12:00 am

Turkish media reported that Muhammad al-Rasheed, a Syrian arrested in March in Turkey for smuggling foreign DAESH recruits into Syria and who confessed to working for Canadian intelligence, faces 26 years in prison on charges of terrorism and smuggling

Prosecutors wrapped up their indictment of Muhammad al-Rasheed, a 28-year-old Syrian national accused of smuggling recruits for DAESH into Syria through the Turkish border. Al-Rasheed, who was arrested in March in a Turkish town bordering Syria, confessed he worked for the Canadian intelligence service - though Canada did not confirm or deny his connection.

The Syrian man now faces 26 years in prison on charges of being a member of a terrorist organization and human trafficking, the Habertürk daily reported Wednesday.

Al-Rasheed's case garnered international attention when it was discovered he was responsible for smuggling Shamima Begum, 15, Amira Abase, 15, and Kadiza Sultana, 16 - three British teenagers who left their London homes in early February to join DAESH. The girls' case had epitomized how a small population of youth in European countries are being brainwashed to join the militant group, which rose to prominence after capturing several regions in Syria and Iraq. Footage from a hidden camera released by Turkish media had shown al-Rasheed speaking to the three girls, giving them instructions on how to travel to Syria.

More importantly, it was revealed that al-Rasheed, at least according to his statement to police, was working for the Canadian intelligence service. In his police interview, al-Rasheed reportedly claimed he supplied information to intelligence officers stationed at the Canadian Embassy in Amman, Jordan, in the hope of securing Canadian citizenship, as he had applied for asylum in 2013.

The indictment revealed details of money transfers to al-Rasheed from abroad and how he transported DAESH recruits to Syria as well as his contact with Canadians.

A police search in al-Rasheed's house in Turkey found documents showing money transfers to his account from 10 people residing in the United Kingdom, with the highest amount shown as $2,418. Images of passports belonging to 16 people, including the three British girls, were found on al-Rasheed's computer. Others, estimated to be potential recruits for DAESH, include Norwegian, Australian, Tunisian, Somali, Belgian, South African and Nigerian nationals. The Turkish media reported that Belgian national Sahil Ahmed was among them. He is wanted by Belgian authorities for fighting for DAESH in Syria.

Al-Rasheed claimed he was not familiar with those who sent him money from the U.K. and he insisted that he only acted as a middleman for the transfer of money to DAESH. "I was transferring money to Raqqa [in Syria]. My mission was to learn details about contacts of [DAESH] members and relay this information to my liaison at Canada's Embassy in Jordan," he told Turkish police.

Al-Rasheed, a dentist by profession, said he first acted as an agent for the Canadian intelligence service while working at a hospital in Raqqa. He claimed he was notifying Canadian officials about DAESH militants being treated at the hospital. "I used to record their activities and travel to Jordan via Turkey occasionally to inform the Canadians. They pledged to grant me citizenship in return for my service," he told police. He named his Canadian liaison as "Matt from the embassy" and claimed he sometimes contacted "a senior official called Claude."
RELATED TOPICS