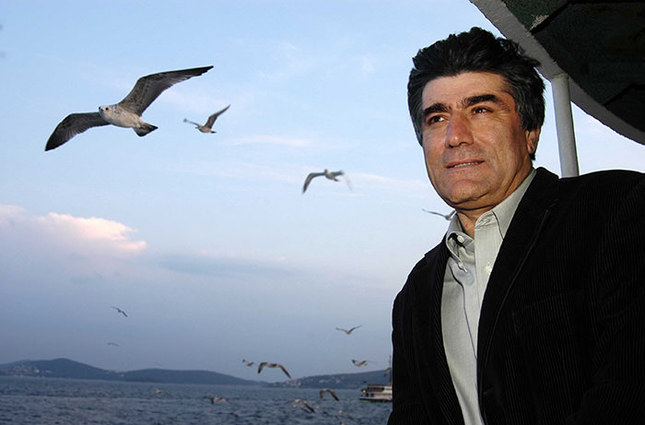 | File photo
by Daily Sabah Dec 09, 2015 12:00 am
A Turkish prosecutor Wednesday sought aggravated life imprisonment for three former officials for murder in fisrt degree as part of the case in the negligence of officials in not preventing the murder of prominent Armenian-Turkish journalist Hrant Dink in 2007.

The indictment which was accepted by the Istanbul Chief Prosecutor's Office, demanded aggravated life imprisonment for the former chief of police in Trabzon, Ramazan Akyürek, the former head of police intelligence department, Ali Fuat Yılmazer and the ex-deputy chairman of the same department, Coşkun Çakar for murder in the first degree. The indictment also asks for 22,5 years of jail sentence for the three suspects for running a criminal organization, homicide and forgery of documents.

Prosecutor Gökalp Kökçü presented the indictment earlier but it was rejected due to technicalities.

The Criminal Court will now decide whether to approve the indictment or return it. If accepted, the case will see 26 suspects brought to trial, including former police chiefs linked to the shadowy Gülen Movement and the head of the National Police's intelligence department.

Dink, who was the editor-in-chief of the Istanbul-based Armenian Agos newspaper at the time of his death, was shot dead by 17-year-old Ogün Samast, on Jan. 19, 2007. Dink drew ire from hardline Turkish nationalists for being one of the most outspoken voices of the need for new debates on the controversial issue of the Armenian genocide. He received numerous death threats before his murder and faced several lawsuits for "denigrating Turkish-ness," an act punishable with prison time, for his articles and editorials on the mass deaths of Armenians in 1915.

Ramazan Akyürek and Ali Fuat Yılmazer, both affiliated with the Gülen Movement, are among the suspects accused of deliberately neglecting intelligence about the murder of Dink, who was shot dead by Samast in front of his Istanbul office. Akyürek was the chief of police in Trabzon – Samast's hometown – when Dink was assassinated, and later served as the head of the National Police's intelligence unit. Yılmazer was deputy director of the police's intelligence department and allegedly thwarted an investigation into the police's role in the murder plot.

Akyürek was arrested in February under orders from an Istanbul court just one day after he was detained for questioning regarding the Dink murder.

Sabri Uzun, who was the head of the National Police's intelligence department, claimed that his subordinates hid tip-offs that warned of Dink's murder. When questioned about the murder, Uzun said that Yılmazer, his subordinate in the intelligence department, hid an intelligence report from him regarding the plot to kill Dink. Yılmazer was already imprisoned for nine months for other charges involving the notorious wiretapping activities committed by Gülenist infiltrators. He was arrested again in October on charges of illegally wiretapping thousands of people in a new investigation into the alleged Gülenist infiltration of the police and the judiciary.

The Gülen Movement has long been accused by some as the ringleader behind the murder plot. The movement is accused of trying to shift blame for the murder onto others, including Ergenekon, an alleged gang of generals, journalists and several prominent figures who were imprisoned after a trial conducted by Gülenist prosecutors.

Followers of the movement, which is headed by the powerful, U.S.-based fugitive cleric, Fethullah Gülen, were found to have infiltrated key posts in the police and judiciary in an attempt to overthrow the government, according to several ongoing legal inquiries.

The first prosecutor assigned to the Dink case, Muammer Akkaş, and his successors, all allegedly linked to the Gülen Movement, did not investigate allegations that Akyürek had deleted electronic and telephone records at the National Police Department – which could have provided valuable information in the case, according to media reports. Moreover, according to reports, security camera footage of the murder was not properly examined and the role of police intelligence officials and gendarmerie officers both in Istanbul and Trabzon, where the perpetrators allegedly planned the murder, were not investigated.