Neo-Nazi trial: Zschaepe says only guilty for not stopping murders 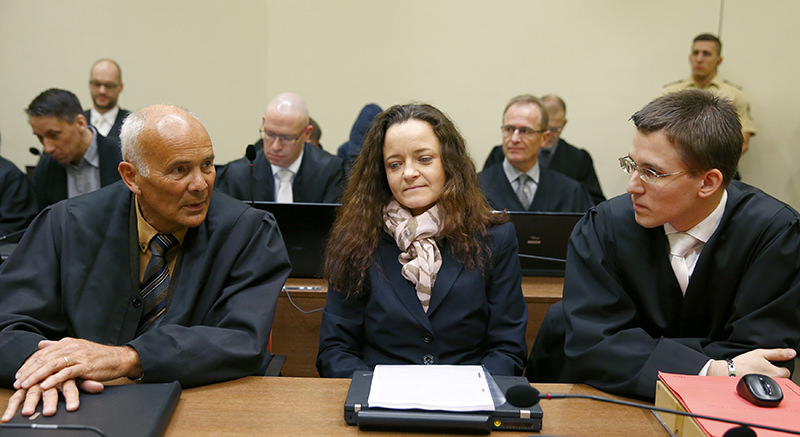 Defendant Beate Zschaepe (C) sits with her lawyers Hermann Borchert (L) and Mathias Grasel (2nd R) prior to the continuation of her trial at a courtroom in Munich, southern Germany, December 9, 2015 (AFP Photo)
by Compiled from Wire Services Dec 09, 2015 12:00 am
Beate Zschaepe, the sole surviving member of a German neo-Nazi gang involved in the murder of eight Turks, denied her role in the murders at a hearing in Munich on Wednesday which marked the first time she broke her silence during the two-year-old trial.

The highly anticipated hearing started with her lawyer reading a lengthy statement on behalf of his client.

Zschaepe said she learned about the murder of eight Turks, a Greek and German policewoman, between 2000 and 2007, only after they occurred and claimed Uwe Mundlos and Uwe Böhnhardt, two other members of the National Socialist Underground (NSU) were responsible for the crimes, which also included two bomb attacks and 15 bank robberies.

Her decision to speak out after two years of silence is linked to reports that the trial will likely conclude early next year after all the eyewitnesses are heard by the court. She faces life imprisonment if found guilty. Zschaepe said she was neither involved in the preparations for the murders, bombings and robberies nor was she involved in carrying out the crimes.

She said she was "horrified" when Böhnhardt and Mundlos told her about some murders and thought about informing the police. What changed her mind was the "threat by the two men to commit suicide" and her financial dependence on the men. She said she felt "morally guilty" because she could not prevent the crimes and took herself to drinking four bottles of wine every day to forget what transpired. Zschaepe also admitted that she set fire to a flat where she had lived with the two men after they killed themselves in 2011 when police closed in on them after a botched bank robbery. She said she acted out of an agreement she had made previously with the duo to destroy evidence of their crimes if they died.

The families of the victims to whom Zschaepe extended her "sincere apologies" in her testimony were not convinced by her statements. German media, quoting Mehmet Daimagüler, a lawyer for the victims' families, said "We are not convinced that Ms. Zschaepe was indulging in wine while people were getting murdered."

Gamze Kubaşık, the daughter of Mehmet Kubaşık, who was killed by the NSU, said Zschaepe tried to dodge responsibility in the case with her statement. She said, "I am disappointed and I don't believe one word of it," adding that she did not accept her apology and was frustrated that the defendant did not answer any of their questions during the hearing.

One of the most shocking crime sprees in the recent history of Germany came to light when the bodies of two men were found in a mobile home in Eisenach, Germany, on Nov. 4, 2011. What followed was the startling revelation that the two men, along with Zschaepe, were behind a series of murders targeting Turks and Greeks as well as bombings in migrant-populated neighborhoods. The trio called themselves the National Socialist Underground according to a DVD found in their home with victims' photos.

Four years after the discovery, suspicions are ripe that the NSU did not act alone in the murders, as German intelligence turned a blind eye to their activities. Lawyers for the Turkish victims of the attacks had complained earlier that the German state failed to shed light on the gang's "connections" to German intelligence services.

Recently speaking to Anadolu Agency, Özcan Mutlu, an opposition lawmaker, pointed out that authorities simply "stumbled on the case" in 2011, long after the murders of eight Turks and a Greek, between 2000 and 2006, which were notoriously branded the "döner killings" by German media and initially blamed on internal strife between immigrants. He said the trial presented clear evidence that a murderous trio cannot be solely responsible for the murders and bombings.

Mutlu said the gang had supporters, but it could not yet be proven. He added that failures by the state's security services had already been proven by an investigation into the crime spree. "For some reason, the killers got away in the instant of their imminent capture. It looks like somebody notified them beforehand. We cannot prove it, but too many intelligence failures lead us to ask questions," Mutlu said. He said the trial was prolonged because it was difficult to assess evidence in the murders committed by the NSU since "evidence was destroyed, along with files on the NSU in the archives of intelligence services."

"Two defendants already died and another one has not spoken in three years," he said, pointing to the silence of Zschaepe during the entirety of the trial. "It is a difficult case. Besides, every official from security and intelligence services suffer from some sort of memory loss," he said ironically. "They don't 'remember' what happened. So, we face a grim situation regarding the case," he said.

Mutlu also pointed to other "strange occurrences" during the trial, such as a witness found on the roadside after suffering from "an odd diabetes-induced coma" and the discovery of the body of another witness. "These are odd coincidences. Something is fishy in this case," he said.

Last year, Thomas R., a witness that claimed to be an informant for the German intelligence agency, died of previously undiagnosed diabetes. In March, Melisa M., another witness, died of a pulmonary embolism. She was the ex-girlfriend of another witness with ties to the NSU, who himself died under mysterious circumstances two years ago.
Last Update: Dec 09, 2015 10:55 pm
RELATED TOPICS