Gülenists entangled in more accusations of fraud on exams 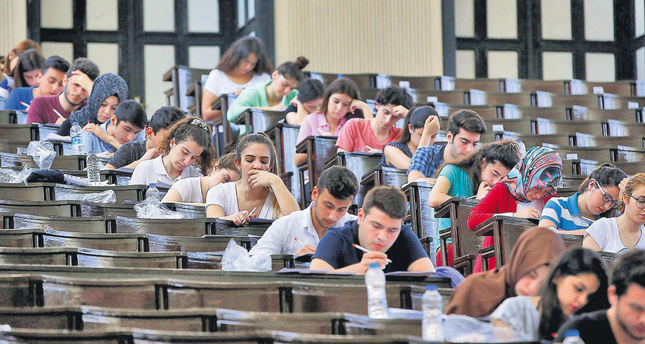 Students at a LYS exam at a school. The exam is the only way for millions to be admitted to colleges. Gülenist-run schools boasted in the past for the success of their students on those exams.

The controversial Gülen Movement, long accused of helping students cheat on critical exams in order to infiltrate state agencies, now faces charges of supplying questions to students before a university exam, according to reports from Turkish media outlets

The Gülen Movement is at the center of another exam cheating probe. This time, the controversial group, accused of terrorism, is accused of helping its followers cheat their way out of a university exam, according to reports in Turkish media outlets.

Prosecutors launched an inquiry into the allegations by a student who took the Degree Placement Exam (LYS), a five-round university admissions exam. The unidentified student claimed that three days before the 2012 exam, he was given the questions and answers for the exam in a dormitory run by the Gülen Movement. The student eventually passed the exam and enrolled in a prestigious medical school he still attends.

The Gülen Movement, headed by the U.S.-based retired preacher Fethullah Gülen, is at the heart of a string of terror probes. Gülen and his followers, wanted for charges of running a terrorist organization, are accused of attempts to overthrow the government. Several investigations revealed the movement planned to do this by using its infiltrators within the judiciary and police as well as a massive network of followers from every profession in Turkey and around the world.

Exams, such as the LYS, are key to installing the movement's followers to any post in any company, especially state-run agencies. The student who admitted to the cheating reportedly won admission to the Gülhane Military Medical Academy (GATA), a medical school and hospital run by the Turkish Armed Forces, where members of the Army, from conscripts to the top military brass, are treated.

He claimed the Gülenists were too careful at hiding their tracks and selecting students to serve their purposes. "I was staying in a [Gülenist-run] dormitory but they did not allow me to attend a prep school they ran. Instead, they enrolled me in another prep school so no one would discover my connection to the movement," he said. The Gülen Movement, which emerged as a terrorist organization two years ago after its alleged coup attempt, originally started out as a religious community running an international network of schools. Those schools are viewed as recruitment grounds for the movement whose followers and sympathizers range from wealthy businesspeople to prominent judges, prosecutors and police chiefs.

The student said members of the movement who ran the dormitory he stayed at had convinced him to pick the military school and had him take an oath that he would not tell anyone about the questions and answers. "They told me all's fair in war, and gave me all the questions for the math section of the exam. I was excited when I saw that the questions and answers they gave me was what was on the exam," he said in his interview with the interrogators.

The movement is accused of gaining access to questions and answers of various exams through its point men in an education authority tasked with overseeing the exams. A total of 230 suspects were indicted in a recent case for obtaining questions for the Public Personnel Selection Exam (KPSS), a test for those seeking a bureaucratic post. Hundreds of people were detected of cheating on the 2010 KPSS exam. The indictment said the majority of the suspects who achieved high marks on the exam were either relatives, members of the same family or worked at the same schools and companies linked to the Gülen Movement, according to media reports. The prosecutor's statement in the KPSS probe said "the organization" aimed to achieve priority in the assignment to civil service posts to enable the infiltration of its members.

Two nonprofit organizations run by the Gülenists are at the heart of the cheating scandal. Officials at the Turgut Özal and Hamle associations are accused of obtaining the questions and answers. Senior officials from both associations disappeared after the inquiry began into past KPSS exams earlier this year and are believed to have fled abroad. Two former presidents of the Measuring, Selection and Placement Center (ÖSYM), which oversees the exams, are among the suspects.

It is not the only exam Gülenists are accused of cheating on for easy access into state posts. Their cheating scheme was also detected for international exams such as the International English Language Testing System (IELTS), the Test of English as a Foreign Language (TOEFL) and two renowned tests for English language proficiency. Sources say an undisclosed number of academics, reportedly linked to the movement, were investigated after it was discovered that the organizers of the IELTS in Turkey were bribed by the Gülenists. The IELTS is used for the promotion of academics at universities. An inquiry in 2013 found more than 1,500 people scored suspiciously high marks on exams at five private universities with ties to the movement and were eventually employed by public universities. Like in the KPSS scheme, accomplished participants were found to be either couples or relatives who scored too low in previous easier exams organized by the ÖSYM.

An inquiry on cheating in TOEFL exams is focusing on allegations that the Gülenists with higher language skills sat for the exams on behalf of those who failed previous TOEFL exams.