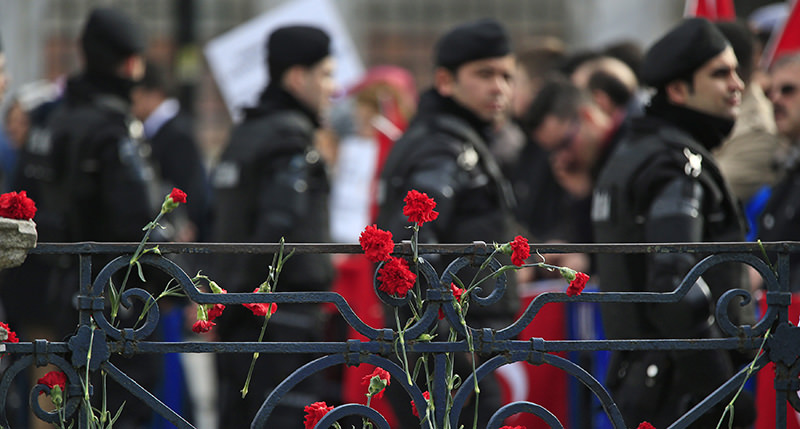 Carnations, with the Turkish police in the background, are placed at the site of Tuesday's suicide bomb attack at Sultanahmet square in Istanbul, Turkey January 15, 2016 (Reuters Photo)
by Anadolu Agency Jan 15, 2016 12:00 am
The suicide bomber that carried out the Istanbul attack on Tuesday stayed four nights at a hotel in the Turkish capital Ankara, police sources have said.

Turkish terror and intelligence teams found out that a cellphone used by Fadli first came to their attention near Ankara's intercity bus terminal-ASTI-on Dec. 19.

After determining that he hailed a taxi in Ankara's Mamak neighborhood, investigating teams questioned the vehicle's driver.

In his testimony the driver said Fadli spoke in Arabic. In order to understand what he wanted, the taxi driver called an Arabic-speaking relative who confirmed that Fadli said he wanted to go to a "hotel where Syrians stay".

At Fadli's request, the taxi driver sent him to some hotels in Ulus, Ankara's central quarter, but got a negative response from all but one.

Eventually, one hotel in Ulus, hosting mostly Syrian nationals, accepted Fadli. He stayed there until Dec. 23. The cellphone signal shows that Fadli did not leave the area around the hotel from Dec. 19 to Dec. 23.

Turkish police examined the hotel's camera system but due to the expiry of the device's memory, images had been automatically deleted. The authorities say they did not find any external intervention in the system which would account for the deletion of the images.

As the last signal from Fadli's mobile phone came from a station in Ankara's Balgat district, it is thought that he left Turkish capital with an intercity bus form AŞTİ.