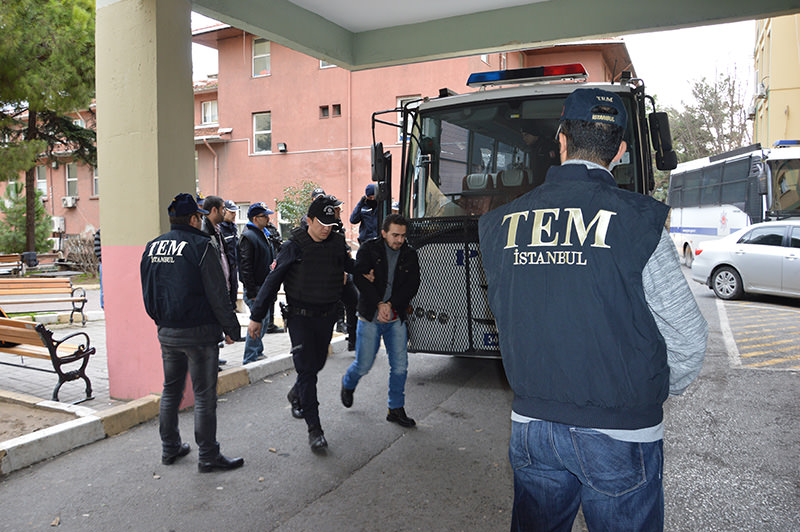 by daily sabah Jan 17, 2016 12:00 am
Turkish court on Sunday arrested 10 suspects in relation with the Istanbul bombing for "being a member of terrorist organization" as six other suspects who were detained earlier today were released.

On early Sunday, more than a dozen Syrian nationals suspected of involvement in Tuesday's deadly DAESH attack were sent to court for arraignment. The 16 suspects linked to the prime suspect, Nabil Fadli, have been detained in police operations ongoing across the country since Tuesday. The suspects, including one who is under the age of 19, underwent medical examinations before being sent to an Istanbul Court in Çağlayan.

The Jan. 12 terrorist attack killed 10 German tourists and injured 15 people. Media reports also claimed that Fadli's relatives were also linked to DAESH and that he once worked for an arm of the Syrian regime's notorious intelligence agency, al-Mukhabarat.

Fadli, 28, who reportedly arrived in Turkey sometime between December and the first week of January from Syria, registered as an asylum seeker on Jan. 5 at a state-run migration center in Istanbul where he had to give his fingerprints as part of the registration process. This led to the discovery of his identity by a forensics team investigating the scene of the attack. He was accompanied by four other Syrians during his trip to Turkey, according to media reports. After a brief stay with the four in the same house, he disappeared. The five men first arrived in Şanlıurfa, a town on the Turkish-Syrian border, before heading capital Ankara. After a brief stay in various houses in the capital, they traveled to Istanbul.
The rest of the detainees are linked to al-Mukhabarat. Security forces discovered that Fadli made multiple calls to a man reportedly working for the Syrian Consulate during his stay at various hotels and guest houses for refugees in Istanbul's Zeytinburnu district – where he was registered as an asylum seeker – as well as in Fatih, the district where Sultanahmet Square is located. The man identified by the code name "Dr. Sinan" is accused of masterminding the attack, and worked as a double agent for DAESH and al-Mukhabarat, a report in Sabah newspaper claims.

Fadli, carrying a suicide belt laden with RDX and TNT explosives, walked to an entrance of the square and approached groups of tourists who were standing near an ancient obelisk around 10:20 a.m. According to a police report, his initial attempt to set off the hand grenade he used to detonate the explosives failed but was detonated on his second attempt. Fadli is a son of a Syrian family who returned to the war-torn country 15 years ago after living in Saudi Arabia for years. He worked in a furniture store before the 2011 uprising and first joined the rebel groups fighting the regime of Syrian President Bashar Assad before joining DAESH.

Security sources reported that DAESH turns to "dead" militants when planning suicide bombings, faking their deaths in Syria before sending them on missions abroad. Firas Abi-Ali, an analyst with the security consultancy, IHS Country Risk, told the Associated Press that the bomber's registration as a refugee hints at central planning being made by top leaders in DAESH, either to cover terrorists' tracks or ignite backlash in Europe against Syrians as they migrate by the masses to the continent as asylum seekers in the face of ongoing conflict that has displaced millions in Syria. One of the most notorious examples includes two perpetrators of the November Paris attacks, who were identified as two men registered as refugees in Greece with fake Syrian passports.

The terrorist organization has carried out attacks in Turkey in the past but the Sultanahmet bombing was the first instance of a popular touristic destination being targeted. DAESH is also blamed for a suicide bombing in Suruç, a border town in south Turkey, and twin suicide bombings which hit Ankara in July and October last year, respectively. The first attack, targeting a rally of activists, killed 32 people while the second one occurred near a train station at yet another rally of activists, killing 102 people.

A delegation from the German Federal Criminal Police, which arrived days after the Sultanahmet attack, met with officials from the Istanbul Police Department Counterterror Unit over the weekend. After being briefed on the progress of the investigation, they went to the scene of the attack.
German Interior Ministry officials said the team would work in cooperation with Turkish authorities to support the ongoing investigation. The attack came at a time when efforts to clamp down on DAESH are intensifying in Turkey, which is becoming increasingly threatened by the terrorist organization. More than 200 suspected members of the group were detained in nationwide operations one week before the bombing while authorities detained another 68 suspects earlier this week, including three Russians accused of providing logistical support to the militant group. Reports said the suspects were planning attacks in large cities. Turkey has detained more than 3,300 people since DAESH emerged in Syria, arresting 847 total militants, according to figures from the Interior Ministry. A large number of DAESH suspects are foreigners and Turkey has banned more than 35,000 people from 124 countries suspected of trying to enter the country to travel to Syria and join DAESH. Turkish officials have also deported 2,894 others from 92 countries for allegedly having connections with the terrorist group, according to official figures.

The bodies of the 10 German tourists killed in Tuesday's attack were sent back to Germany on Saturday. All victims were elderly German tourists who were on a sightseeing tour at Sultanahmet Square, a hot spot for tourists with iconic landmarks such as the Blue Mosque and the Hagia Sophia museum. A German military plane departed from Atatürk Airport in the afternoon and flew to the Berlin-Tegel Airport, reports said. The bodies were taken to a forensic department where autopsies will be performed.

Germany and Turkey will hold a joint mini-Cabinet meeting on Jan. 22 in Berlin chaired by Merkel and Prime Minister Ahmet Davutoğlu, with the expected participation of key ministers. Merkel said the meeting was planned long before the Istanbul attack, and the topics will not be restricted to security issues but will include talks about cooperation in various other fields, including the economy and foreign policy.

A group of 100 Syrians living in Turkey held a commemorative vigil at the scene of the attack on Saturday. The group, mostly women and children, were carrying placards in Turkish, Arabic and English, condemning terrorism. After a moment of silence in honor of the 10 Germans who lost their lives, the spokesman for the group, Mohammad Rajab Alboukai, who has been living in Turkey for the past three years said: "We want to show the good faces of Syrians. There may be bad apples but we are here too. We came here to strive for peace across the world. We desire nothing but goodness for Turkey.
Last Update: Jan 18, 2016 4:50 pm
RELATED TOPICS