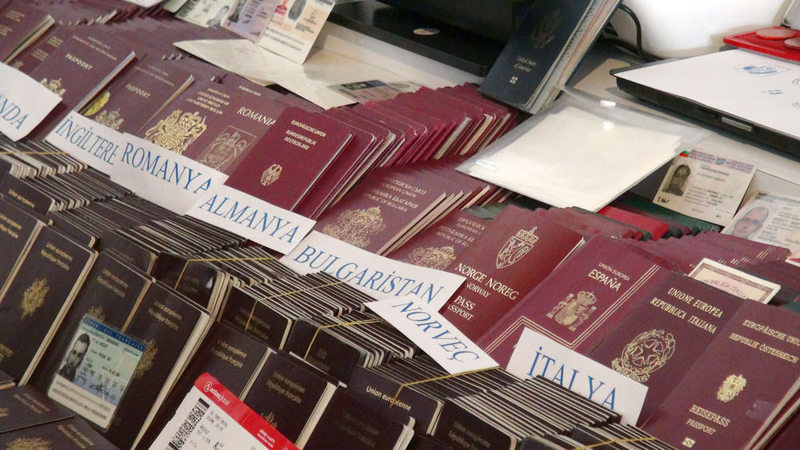 by Daily Sabah with Wires Feb 04, 2016 12:00 am
Police have revealed a human smuggling ring operating out of Istanbul after months of surveillance. Eight suspects, including one Syrian, accused of running the ring were arrested in simultaneous operations in the city's Fatih, Bakırköy, Büyükçekmece, Bağcılar, Arnavutköy, Küçükçekmece, Esenyurt and Zeytinburnu districts a few days ago.

The operation was announced to the press yesterday and police said the suspects were in possession of 1,050 genuine passports from 50 countries. It was unclear how the suspects obtained the blank passports where the personal information of potential buyers can be easily typed in. The passports were from several European countries including France, Belgium, the Netherlands, Bulgaria, Spain, Italy, Sweden and Syria. Police also confiscated fake IDs and driving licenses from several countries as well as flight passes, seals used by customs offices at Istanbul's Atatürk and Sabiha Gökçen airports and equipment used in the production of fake passports and IDs.

Police also intercepted 197 people from Syria, Myanmar, Afghanistan, Iran, Eritrea and Iraq who were about to leave Turkey with passports they obtained from the gang. The gang's leader, only identified by his initials H.K., remains at large. Police sources said the gang charged $15,000 for the blank passports.

Among the buyers of the passports was Rojhat Ö., a member of the PKK terrorist organization. The suspect, wanted on terror charges after a court sentenced him in absentia to 22 years in prison, was captured at a hotel in Fatih as he was about to depart Turkey.

Human smuggling in Turkey, a transit route for migrants from Middle Eastern and Asian countries due to its location between Europe and Asia, has thrived recently. The war in its southern neighbor Syria has made Turkey a favorite destination for migrants who use it as a launch pad for journeys to Europe. Most migrants prefer sea routes due to the proximity of the Turkish coast to Greek islands while others prefer a land route from the northwest. Turkey plans to introduce heavier sentences for smuggling. Deputy Prime Minister and government spokesman Numan Kurtulmuş told reporters late Monday that the cabinet has decided on working to classify smuggling as an act of terror and organized crime. The move may help Turkey's crackdown against smugglers, which has seen the detention of 204 people accused of organizing illegal crossings across the Aegean Sea between Turkey and Greece since January 2015.

Istanbul, the country's most populated city and a cosmopolis hosting people from all around the globe, is a major attraction among migrants arriving to Turkey. Migrants, both from other cities in Turkey and impoverished, war-torn countries, either travel to the city for work or to head to the country's coastal cities for an illegal migration to Europe.
RELATED TOPICS