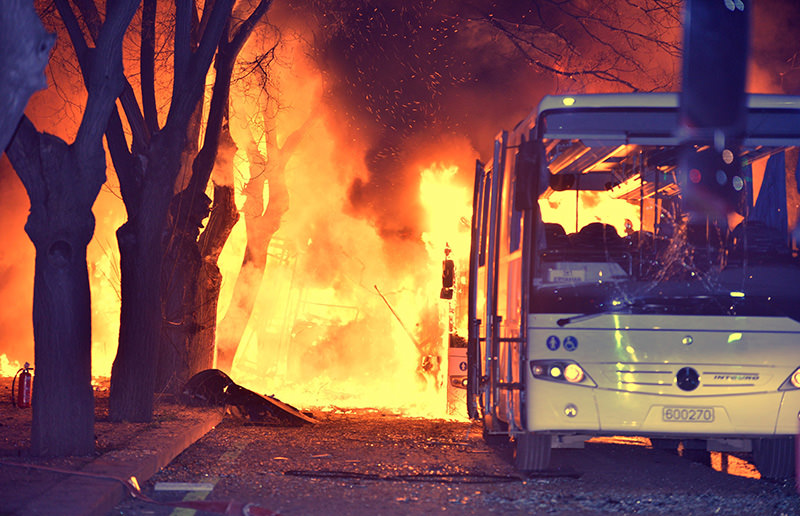 by Daily Sabah with Reuters Feb 17, 2016 12:00 am
Initial signs indicate that militants from the PKK terrorist organization were behind the Ankara bombing on Wednesday that killed at least 28 people, a Turkish security source told Reuters.

However, separate security sources in Turkey's mainly Kurdish southeast gave a different account, saying they believed Daesh militants were behind the bombing.

Although not naming the terrorist organization directly, President Recep Tayyip Erdoğan implied that the PKK may be behind the attack through a written statement. "We will continue our struggle with more determination against these pawns and the forces behind them who carry out these attacks that have no moral or humane limitations," were Erdoğan's words. Turkish officials, including Erdoğan and Prime Minister Davutoğlu, have recently referred to the PKK and PYD as 'pawns of Russia' in Syria, condemning their actions targeting the moderate opposition.

Meanwhile, it was claimed in social media circles that a hardliner group within the PKK known as the Freedem Falcons of Kurdistan (TAK) claimed responsibility for the attack. No official statements have confirmed this claim so far.

The group had recently conducted the mortar attack against Istanbul's Sabiha Gökçen Airport in December 2015, which killed an airport staff.

Reports on the TAK group suggest that it advocates more bloodshed directed at civilians than the PKK.

At least 28 people were killed and 61 were injured in the blast, Deputy PM Numan Kurtulmuş confirmed.

Ankara was rocked by another bombing attack in October – the deadliest attack in modern Turkish history – which was set off by two suspected suicide attackers in a crowd of leftist, pro-Kurdish and union activists at a peace rally. The attacks near Ankara's main train station left 97 demonstrators dead and 246 injured.
Last Update: Feb 18, 2016 5:33 pm
RELATED TOPICS