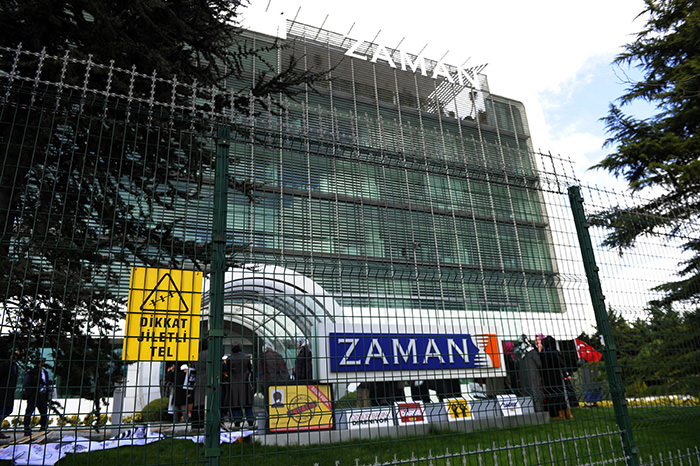 A court greenlit the appointment of trustees to Zaman daily, a mouthpiece for the terror-linked Gülenists, while police launched an inquiry into a major conglomerate for the alleged financing of Gülenists on Friday in the latest bid to crack down on the shady Gülen Movement

The latest chapter in the authorities' crackdown on the Gülenist Terror Organization (FETÖ) opened on Friday as a court ordered the appointment of trustees to Zaman, a newspaper closely affiliated with Gülenists and police launched a probe into Boydak Holding conglomerate on charges of funding FETÖ members.

State-run Anadolu Agency reported that a court approved prosecutors' requests to appoint trustees to the Gülenist mouthpiece Zaman newspaper, though no reason was given for the move, which is viewed as a way to thwart the activities of corporate entities accused of involvement in crimes. Court order covers an umbrella company which owns Zaman, its English-language sister publication Today's Zaman, Cihan News Agency and several other publishing subsidiaries.

The indictment against the newspaper said the newspaper's employees have met with members of FETÖ terrorist organization in several European cities. Zaman is also accused of exaggerating daily circulation with fake methods to siphon off money from the state.

Newspaper staff put a large chain on the front gate of the publication's headquarters in Istanbul's Yenibosna district and held banners protesting the court order as they awaited the arrival of bailiffs and security forces as the news went to print.

Last year, judges ordered the appointment of trustees to Bugün and Kanaltürk, a newspaper and television respectively, for their links to FETÖ. Zaman, like Bugün and Kanaltürk, is known for its editorial policy critical of Turkey's efforts to wipe out the Gülenists' influence, accused of two attempts to overthrow the government three years ago.

Zaman newspaper has been mired in controversy for its open support for FETÖ. Its former editor-in-chief Ekrem Dumanlı was briefly detained for charges of terrorist organization membership two years ago. Staff of the newspaper blocked police from detaining Dumanlı before the journalist finally turned himself in after hours of confrontation. Several employees of the newspaper and its sister publications also face similar charges.

The newspaper, founded in 1986, is one of the publications owned by Feza Gazetecilik, a company linked to Gülenists. It is the best-selling newspaper in the country, though the high circulation rate is attributed to its free distribution. It often publishes articles by the Gülen Movement's leader, U.S.-based retired imam Fethullah Gülen.

Also on Friday, police detained four executives from Boydak Holding, a prominent business conglomerate, as part of an inquiry into the corporation's ties to the controversial Gülen Movement and allegations of financing the movement's terror activities. The company's CEO Memduh Boydak, chairman of the board Hacı Boydak, board member Erol Boydak and senior executive Murat Bozdağ were detained in the early hours of Friday by the police's organized crime unit in the central city of Kayseri where the corporation's headquarters are located. Hacı and Memduh Boydak are accused of membership of FETÖ and funding Gülenists, while two other men were detained for "terror propaganda via social media" for posts supportive of FETÖ.

Police squads searched the homes and offices of the detainees while the financial crimes unit examined computers at the company headquarters for suspicious money transactions.

Memduh Boydak was interrogated by prosecutors last year over a case of misuse of lands allocated to the company by local authorities – a charge stemming from the unauthorized building of a mansion in an area designated as a forest - as well as insulting President Recep Tayyip Erdoğan. He was also detained in another corruption investigation.

FETÖ, an official name given to some supporters of the Gülen Movement headed by Fethullah Gülen, according to prosecutors, faces charges of terrorism for two attempts to overthrow the government in 2013. Since then, a string of investigations were launched against the group and found infiltrators of FETÖ within the police, judiciary and bureaucracy involved in a set of crimes ranging from illegal wiretapping and orchestrating sham trials to imprison the movement's critics.

Gülen is among Turkey's most wanted fugitives, with Turkey exerting tremendous effort to obtain an international arrest warrant for the cleric. His last known location is a compound owned by his movement in Saylorsburg, Pennsylvania. Turkey is seeking to secure his extradition from the U.S.

Boydak Holding, famous for its furniture brands İstikbal and Bellona, owns 41 subsidiaries in various sectors ranging from furniture to cable production, energy and textile. With nearly 14,000 employees and a yearly turnover of about TL 6.9 billion ($2.3 billion) –according to 2015 figures -, it is among the country's largest industrial companies.

Authorities have turned their attention to companies suspected of financing the activities of the Gülenists following a purge of Gülenist infiltrators in 2014 and the following years. Koza İpek Group, another large conglomerate with interests in media and energy, were the target of a probe against Gülenists and a court assigned trustees to run the company while an investigation is underway on charges that the conglomerate's chairman, Akın İpek, secretly funneled a large amount of cash to FETÖ.
Last Update: Mar 05, 2016 1:52 am
RELATED TOPICS