Peddler detained in İzmir for smacking down Syrian refugee boy 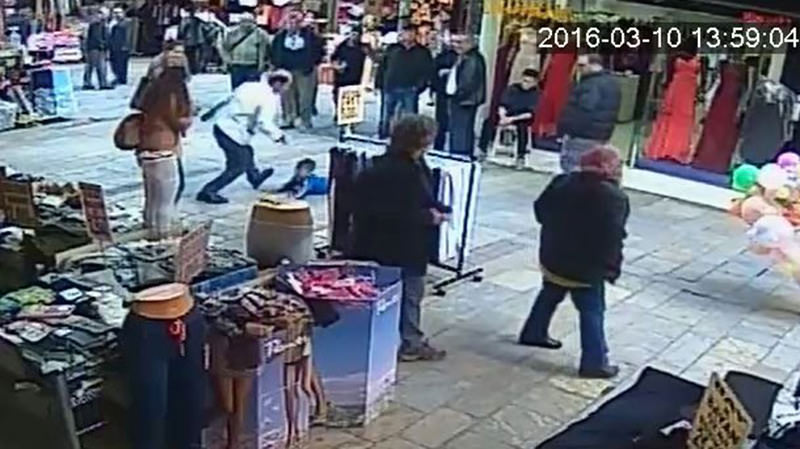 Video footage of a peddler in Turkey's western İzmir province smacking down a Syrian refugee boy for allegedly mocking him with his friends and pushing around the pushcart, has been released, causing public outcry. The video has since been widely shared on social media, with many people anticipating that the peddler gets charged for his action.

The incident reportedly occurred in İzmir's historical Kemeraltı market (bazaar) on Thursday. Musa S., 35, who works as a peddler selling rice with chicken was reportedly harassed by a five to six year-old Syrian refugee boy and his friends for a couple of days prior to the incident.

On the day of the incident, Musa S. reportedly said that the boy had again come near the pushcart, pushing and shoving it around, hitting a woman. The suspect said that was the last straw, which made him run after the boy. After smacking the boy down, the suspect faced harsh negative reactions from the people around.

The suspect may stand trial for causing deliberate injury, although the child left the scene and was apparently unhurt by the attack.

Eyewitnesses said the boy had bruises on his face and briefly passed out. They added that passersby gave water to the crying boy before he left the area with a friend.

"Also, the provincial directorate of family and social policies has been given instructions to find the child and to provide social and financial support to his family. I would like to thank our sensitive citizens who delivered the video footage of violence against the child, and also who shored conscientious and societal reaction at the scene of the incident," the governor further said.

In July 2015, a Syrian child was photographed being beaten by the manager of a restaurant in İzmir's Basmane district, stirring public outrage over unfavorable treatment of Syrians by some locals.

The man was reportedly angered over the boy "harassing" customers as he was selling tissues. Despite the pleas of onlookers, the angry man repeatedly slapped the boy even after he fell to the ground. Photos of the young boy choking with blood dripping from his nose caused a public outcry and the man was interrogated by police. There was an outpouring of sympathy after the boy, later identified as 10-year-old Ahmed Hamdo Abeyd, was found by authorities in a small, decrepit house shared with his family. Several charity organizations have delivered aid to the poor family following the incident.