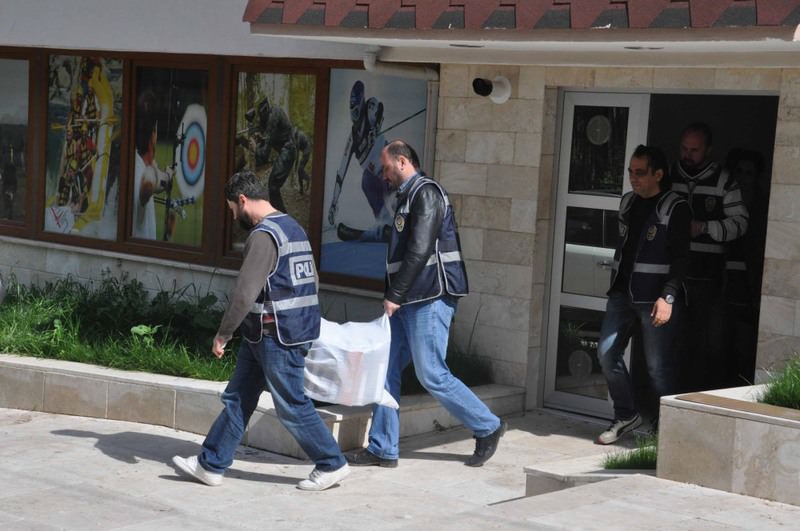 Police officers carry evidence from the offices of an organization allegedly linked to the FETu00d6 in the western city of Denizli on Tuesday. A new police task force will handle cases related to Gu00fclenist wrongdoings.
by Erkam Çoban Mar 24, 2016 12:00 am

The Turkish National Police established a new unit to investigate the Gülenist activities members of the controversial Gülen Movement, which faces charges of running a terrorist organization with help from accomplices

As the Gülen Movement and the affiliated Gülenist Terror Organization (FETÖ) face more scrutiny, Turkish police have established a new task force dedicated to investigating the activities of the group.

The movement, led by US-based retired preacher Fethullah Gülen, is allegedly behind two coup attempts against the government in 2013, as well as a string of associated crimes, ranging from staging sham trials, illegal wiretapping and money laundering.

Since coup attempts led by Gülenists in which police and members of the judiciary linked to the movement tried to imprison ministers on what the government has described as trumped-up charges, the movement faces a massive purge. Hundreds of bureaucrats, police chiefs, judges and prosecutors loyal to the movement were dismissed and a large number of them are subject to prosecution on a wide range of charges.

Turkish National Police have established four new departments for more effective counter-terrorism efforts. The departments will be specialized to focus on terrorist organizations and the links between these groups.

One of those departments is the "Directorate of Fight Against Illegal Structures Disguised as Legal Structures." Though its name sounds awkward, it well describes the activities of Gülenists in Turkey where the group had infiltrators in the state. FETÖ is accused of hiding behind the clout of judges, prosecutors and police chiefs, who allegedly fabricated or forged evidence to imprison people they deemed hostile to the movement or simply installed Gülenists in posts previously occupied by the defendants in those trials. The department will coordinate operations against FETÖ or the Parallel State Structure, as referenced in indictments pointing to infiltrators in the state. The staff specializing in FETÖ cases will investigate connections between FETÖ members, their connections abroad as well as their financing, and infiltrators in the bureaucracy and groups that FETÖ worked with. The department will serve as an auxiliary to courts where cases related to the terrorist organization are being probed. The move aims to streamline efforts against the terrorist organization for better cooperation between state agencies.

The Gülen Movement, which boasts a large international following through its wide network of schools, companies and nonprofit organizations around the world, evolved from a simple religious community to a politicized cult. The group is now the target of multiple investigations into its activities in Turkey.

Gülen resides in Pennsylvania and has no intention of returning to Turkey for trial, as his lawyers have indicated. Authorities are working on an extradition process with the United States, as the first trial for Gülen started last year. If extradited, the 74-year-old will likely spend the rest of his life in prison, as the coup attempt charges he faces carry multiple life sentences.

Over the past weeks, authorities have stepped up the crackdown on Gülenists by detaining and arresting prominent figures linked to the group, including executives of a large business conglomerate accused of financing the terrorist organization. In a separate operation in the western city of Isparta, police detained the former head of a university and a group of Gülenist suspects accused of preparing blackmail videos targeting politicians.

A trial is also underway for nationwide fraud in an exam for civil servants in 2010. Gülenists are accused of supplying questions and answers for the exam to members of the movement, with the ultimate aim of installing people loyal to the movement in state-run agencies.

Also yesterday, the Supreme Court of Appeals ordered the capture of Celal Kara, a former prosecutor linked to the movement, who was earlier dismissed from the judiciary for his role in a 2013 probe, which is viewed as the first coup attempt targeting the government. Kara is among 54 judges and prosecutors who face life imprisonment in a case of illegal wiretapping. He is also among two other Gülen-affiliated prosecutors who remain at large, as they fled abroad following the start of an investigation into their ties to FETÖ. Kara and the others are believed to be in Europe.