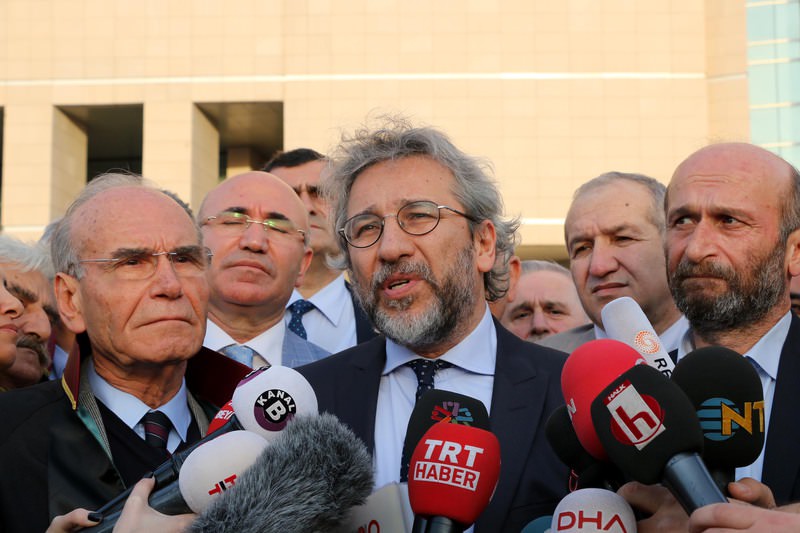 Istanbul's 14th High Criminal Court postponed the trial of two Can Dündar and Erdem Gül, Turkish journalists who face espionage and attempted coup charges, at the second hearing of the case on Friday.

The court postponed the trial until April 22. The second hearing was closed to the press due to the sensitivity of the case where defendants face life imprisonment for espionage, but a large crowd of supporters streamed into the courthouse in Istanbul.

The court ruled against letting the Parliament members of after several opposition deputies entered the courtroom to follow the proceedings, and refused to leave despite being warned by the judges at the first hearing.

Cumhuriyet editor-in-chief Dündar and the newspaper's Ankara representative Erdem Gül are accused of espionage and abetting the Gülenist Terror Organization (FETÖ), aiding in the publishing of confidential information regarding Turkey's intelligence service.

The duo was released on March 9 after the Constitutional Court issued a controversial ruling, which stated that the arrests of Dündar and Gül violated their constitutional rights of expression.

The two men were responsible for a news story published by Cumhuriyet last year regarding a raid against trucks belonging to the National Intelligence Directorate (MİT). The raid was deemed unlawful by judicial authorities and prosecutors, and soldiers and others involved in the raid in southern Turkey currently face trial. The Gülen Movement and affiliates are accused of masterminding the raid, which disclosed a secret MİT operation.

Footage of the MİT operation, which was later claimed to be the work of the FETÖ/PDY, had drawn the ire of the government. Both the military officials who launched the raid, and the prosecutors who ordered it, were arrested last year for violating national security.

The incident caused outrage in Turkey. After footage and photos showing MİT officials being handcuffed at gunpoint by troops surfaced. This prompted the government to reform its intelligence laws, in an effort to avoid such situations in the future.

The Gülen Movement, led by U.S.-based former preacher Fethullah Gülen, is at the center of a string of terror investigations following two attempts to overthrow the government in 2013. The group is accused of illegal activities ranging from terrorism to illegal wiretapping, as well as blackmail and imprisonment of critics. Following the coup attempt, the government has launched a purge of Gülenists who had infiltrated into law enforcement, judiciary and key posts in bureaucracy. A large number of police officers, prosecutors and judges were either suspended from duty or convicted on terror charges, while senior members of the Movement and judiciary figures linked to Gülenists have fled abroad.