Lawyer: Gülenists fund US politicians with money from corrupt schools 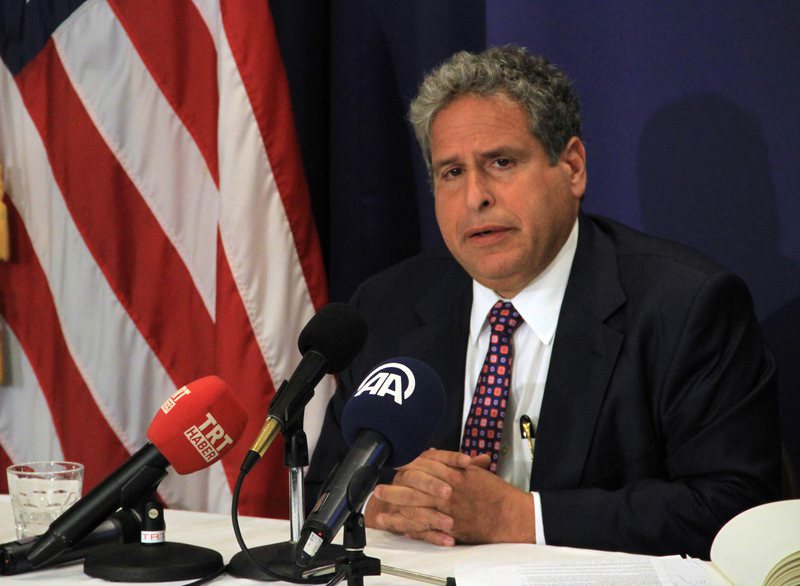 by Daily Sabah Apr 01, 2016 12:00 am
Lawyer Robert Amsterdam, who has been hired by Ankara for lawsuits against Gülenists in the United States, said in a press conference on Thursday that a legal process against the shady movement was moving ahead with new lawsuits and he revealed the initial findings of his law firm's investigation. Amsterdam said the movement used money earned from its charter schools in the United States to bankroll U.S. politicians endorsing the movement's activities.

Speaking to reporters in Washington, Amsterdam said the lawsuits' focus on Gülenist schools showed that the Gülen Movement, from where the Gülenist Terror Organization or FETÖ originated from, had an annual flow of revenues of up to $1.5 billion from charter schools and a majority of schools are entangled in corruption. The Gülen Movement is where FETÖ, named in indictments in Turkey, originated.

Amsterdam said Gülenists skimmed the salaries of teachers forcibly and claimed the money collected was diverted to funds for politicians, especially for funding trips of local politicians to Turkey to recruit them to serve the interests of Gülenists. The lawyer said their investigation and lawsuits would focus on how much the politicians were given and he asserted that an upcoming lawsuit they would start in Texas would prove how politicians in that state were funded by Gülenists.

Amsterdam said that Gülenists violated laws in the U.S., especially in their operation of charter schools, but people were afraid of coming forward to file complaints against them due to threats. He said he was still receiving threats from Gülenists months after Ankara hired his law firm for cases against Gülenists.

He called on people in the U.S., especially Turkish-Americans, to help them in the lawsuits against Gülenists.

Ankara hired Amsterdam's law firm to assist in the global investigation into the activities of the Gülen Movement last year.

Charter schools linked to the Gülen Movement in the U.S. are already facing several probes by the FBI in four states, although the FBI is quiet on the process of the probes, reportedly focused on improper business practices by the charter school chains, allegedly the largest of their kind in the country.

U.S. media reports also point to an alleged $5 million fraud scheme to funnel federal grant money to the movement. A Chicago Sun-Times report, based on court records, said that executives from the Concept Schools Company were the masterminds of a laundering scheme to transfer federal grant money to executive-affiliated companies, with at least $20,000 claimed to have been transferred from a company account to a bank account in Turkey. A court document submitted by a special agent from the inspector general's office for the U.S. Department of Education revealed that Concept Schools directed large portions of money linked to the E-Rate program - established by the U.S. Federal Communications Commission (FCC) to provide discounts to schools to acquire affordable telecommunications equipment and Internet access in the U.S. - away from the charter schools to "related vendors" who paid more than $5 million to several companies linked to school executives. In another court document, the account of a former Concept Schools official showed that the company accepted bids from contractors who had "close ties" with Gülen Movement members and rigged the grant scheme by awarding contracts to companies set up by members of the movement.

Fethullah Gülen, the retired imam who leads the Gülen Movement, is among Turkey's most wanted, with the country exerting a tremendous effort to obtain an international arrest warrant for him. He lives in a compound owned by his movement in Saylorsburg, Pennsylvania. Ankara is seeking to secure his extradition from the U.S.

The Gülen Movement, which has seen members and sympathizers purged from Turkish state institutions, including the police and judiciary, over the past three years, was designated by Turkish authorities as a national threat, a classification used for terrorist organizations. A string of judicial inquiries over the past two years has revealed the seedier side of the movement promotes itself as a charity group that runs schools and works for interfaith dialogue. Gülenists are accused of illegally wiretapping thousands of people from the prime minister to journalists and other prominent figures. They are also accused of imprisoning critics or anyone seen as an obstacle to the movement's attempts to gain further clout through sham trials. Hundreds of generals, academics and others were detained for years in cases in which they were accused of attempting to stage coups. It was later revealed that they were detained on charges based on false evidence planted by Gülenist members of law enforcement.
Last Update: Apr 01, 2016 9:14 am
RELATED TOPICS