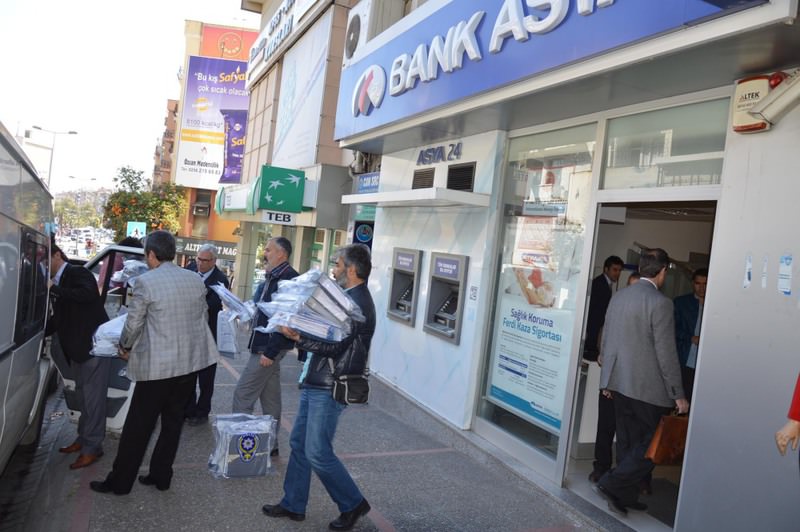 Police in nine cities detained more than 100 suspects, including prominent business figures, in an operation on Monday into the shady Gülen Movement, which is accused of financing its illegal activities with funds from charity donations

In a wave of new detentions on Monday, police rounded up 105 suspects in Istanbul and eight other cities in operations into FETÖ, the terrorist organization originating from the Gülen Movement. Among those detained are board members of Dumankaya İnşaat, a construction company, and employees of Bank Asya, which is also linked to Gülenists. The suspects are accused of defrauding charities linked to the movement, which is led by U.S.-based retired imam Fethullah Gülen. Prosecutors say they used charity money to finance illegal activities. Gülen is the main suspect in a string of cases in which he and his supporters are blamed for two coups attempts in 2013, as well as the illegal wiretapping of thousands of people, money laundering, blackmail and imprisoning critics with sham trials.

He is accused of using the clout he acquired in Turkey thanks to Gülenist infiltrators within the police, judiciary and bureaucracy for illegal ends.

In the early hours on Monday, squads from the Turkish National Police's financial crimes unit raided several locations in Istanbul, the western cities of Bursa, Çanakkale, Kocaeli, the eastern city of Bingöl and northern cities of Ordu, Rize and Trabzon. Police were acting upon orders from a court in Istanbul investigating the funneling of "himmet" to FETÖ. Himmet is the word given for donations to Gülenist charities, which are accused of transferring money for the personal use of FETÖ cadres.

Anadolu Agency reported that 41 employees of Bank Asya, a Gülen-linked lender seized by the state last year in another operation against Gülenists, as well as 45 businessmen and senior members of FETÖ were sought for detention by the court. Each suspect faces charges of membership to FETÖ, financing the organization, spreading propaganda and money laundering.

Gülenists operate a vast network of schools and charities and finance illegal activities with funds supposedly collected for charitable purposes. Though moneyed members of the movement personally finance FETÖ, some businessmen are believed to have been forced to pay "himmet" after they were blackmailed by the group, several media outlets reported.

Halit Dumankaya and Semih Serhat Dumankaya, two board members of the Dumankaya İnşaat construction company were among the detainees. The company released a statement and said they were "invited to police headquarters for an interview." Though an old establishment, Dumankaya grew in recent years thanks to a construction boom in Istanbul and went on to sign a major sponsorship deal with Galatasaray, one of city's most prominent teams, for TL 30 million. The company plans investment of over TL 1.5 billion in 2016 and target a rise in sales to TL 750 million from TL 463 million in 2015.

Quoting a statement by a chief prosecutor's office which sought the detention warrants, Anadolu Agency said the investigation focused on Bank Asya and wrongdoings in which the bank was involved. "Findings of the investigation indicate that money collected for charities was not used as promoted to donors, for example helping the poor, granting scholarships to students, et cetera. Funds from charities were diverted to accounts in Bank Asya branches at the disposal of senior members of FETÖ, through a series of illegal processes. Findings also show bank's employees were in touch with senior members of FETÖ who were using the funds for the organization's own purposes, rather than for charity," the statement said.

Turkish banking regulators seized Bank Asya last year and its administration was transferred to the state-run Savings Deposit Insurance Fund (TMSF) after regulators found that the bank did not comply with transparency requirements with respect to the disclosure of Bank Asya's partnership structure. Prosecutors say detainees working at Bank Asya helped illegal money transfers between 2014 and 2015.

Suspects are accused of providing financial support up to about TL 50 million for FETÖ, using accounts at four Istanbul branches of Bank Asya. The operations started after a lengthy inquiry based on a tip-off by a Bank Asya account holder, who told police that they suspected their account was used for illegal money transfers.

The raids yesterday were the latest bid in the authorities' clampdown on FETÖ financing. In March, Hacı Boydak and Memduh Boydak, two senior executives of the prominent Boydak business conglomerate, were arrested on charges of financing FETÖ. One week later, police raided the offices of Naksan, another business conglomerate, and detained four employees on charges of funding FETÖ. In March, the government held a special Coordination Meeting for The Fight Against the Parallel State Structure (or PDY, another name for FETÖ). The closed-to-press meeting, the first of its kind, was viewed as a signal for a boost to crackdown on Gülenists.

Authorities have also recently shed light on a scheme by Gülenists to transfer money from unsuspecting followers and donors to charities to fund a U.S.-based company linked to the movement. Prosecutors investigating another "himmet" scheme found that "imams," point men carrying out orders from Fethullah Gülen, collected money in conventions with followers of the movement and diverted funds to financing of a company in the United States.

The suspects are accused of collecting about TL 15 million ($5.3 million) from low-ranking members under the guise of donations for "the renting of Gülenist schools, the construction of new schools and aid to the poor." The Gülen Movement has seen members and sympathizers purged from state institutions, the police and judiciary. It was designated by authorities as "a national threat," a classification for terrorist organizations.

A string of judicial inquiries over the past two years has revealed the seedy side of the movement, which promotes itself as a charity group which simply runs schools and works for interfaith dialogue. Gülenists are accused of illegally wiretapping thousands of people, from the prime minister to journalists and prominent figures. They are also accused of imprisoning critics, or anyone seen as an obstacle to the movement's attempts to gain further clout, through sham trials. Hundreds of generals, academics and dignitaries were detained for years, in cases where they were accused of staging coups. It was later revealed they were detained on charges based on false evidence planted by Gülenist members of law enforcement. More than 2,260 people were detained in operations across Turkey since FETÖ was designated as a terrorist organization, Milliyet newspaper reported over the weekend.

The seventy-four-year-old Fethullah Gülen, who currently resides in Saylorsburg, Pennsylvania, has denied charges in trials where he faces a life sentence for coup attempts and other crimes, but refuses to testify in court in Turkey. Ankara seeks his extradition from NATO ally the United States, but the process is expected to be dragged down by the complicated bureaucracy involving extradition.
RELATED TOPICS