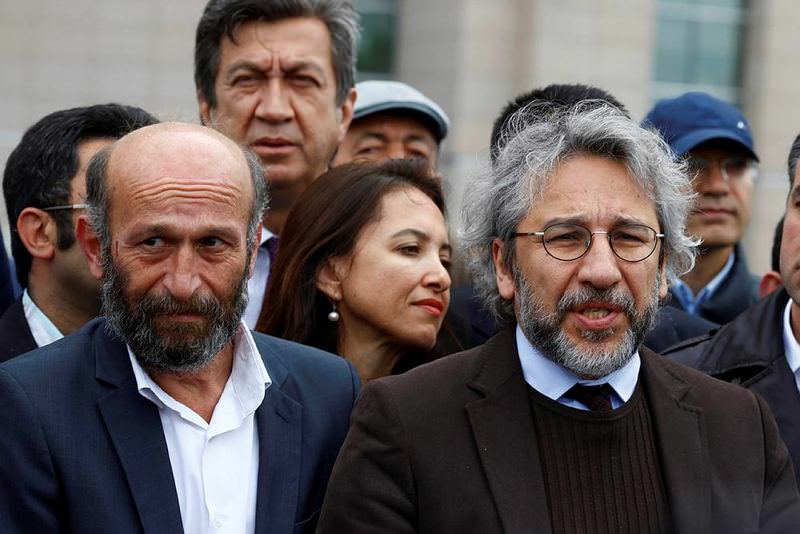 Cumhuriyet daily's two high-level employees Can Dündar and Erdem Gül were given prison sentences for 'procuring and revealing state secrets' by an Istanbul court on Friday, just hours after Dündar escaped an armed attack unharmed in front of the courthouse.

Editor-in-chief Can Dündar was sentenced to five years and 10 months in prison while Ankara Representative Erdem Gül was convicted for five years and six months over 'relasing secret documents'.

Dündar and Gül will not be imprisoned until the appeal process is concluded at the Supreme Court of Appeals and their ban for leaving the country was lifted by the court.

The court also separated out charges of links to terrorist organisations to await a verdict in a separate trial.

Meanwhile, the Istanbul 14th High Criminal Court acquited Dündar and Gül of charges over plotting to overthrow the government.

Their lawyers had said before the court decision that the prosecutor did not seek the espionage charge in his closing statement, but nonetheless called for Dündar to be jailed for 25 years for procuring and revealing state secrets and Gül for to be jailed for 10 years for publishing them.

Dündar, who serves as editor-in-chief of Cumhuriyet, and Gül, who serves as Cumhuriyet's Ankara representative, were arrested last year after publishing a controversial report regarding the National Intelligence Organization (MİT).

The duo was arrested on November 26, 2015 and released pending trial on February 25, 2016 upon a Constitutional Court decision.

Dündar and Gül were responsible for publishing footage regarding an unlawful raid that targeted trucks belonging to the National Intelligence Agency (MİT) in early January 2014.
Last Update: May 07, 2016 12:23 am
RELATED TOPICS