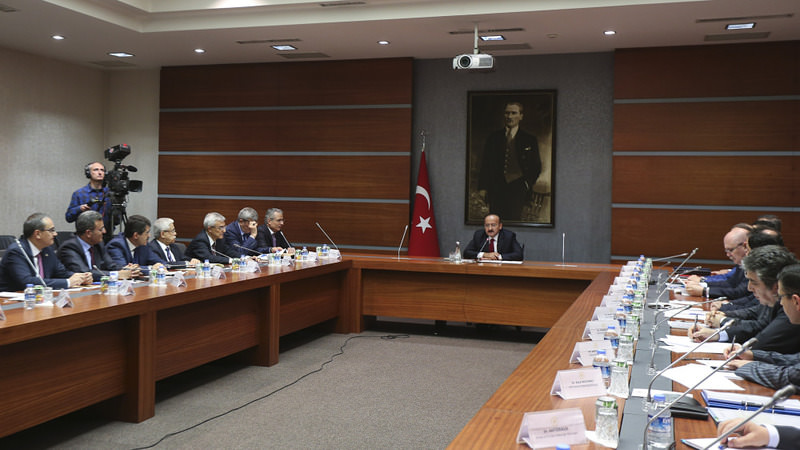 At a time of intense crackdowns on the controversial Gülen Movement, senior officials, including the head of the intelligence service, met yesterday to discuss future steps in the fight against the ‘parallel structure,' the name given to the movement's infiltrators within state agencies

Senior officials met yesterday to discuss steps they could take against Gülenists, a "national threat" according to Ankara, as their "parallel state" is accused of orchestrating two coup attempts in December 2013.

Deputy Prime Minister Yalçın Akdoğan chaired the meeting that brought together bureaucrats from all state agencies including Hakan Fidan, undersecretary of the National Intelligence Directorate (MİT). The parallel state is the name designated to followers of the Gülen Movement or those affiliated with the movement who infiltrated the police, judiciary and bureaucracy. Members of the group, also known as the Gülenist Terror Organization (FETÖ), are implicated in a string of crimes ranging from money laundering, blackmail, illegal wiretapping and orchestrating the imprisonment of the movement's critics by false evidence.

Yesterday's meeting follows a small-scale March convention of ministers and bureaucrats to discuss the parallel state. Although authorities have continued operations against the Gülenists since their coup attempts were discovered, such high-level meetings for coordination are rare. Deputy Prime Minister Yalçın Akdoğan coordinates the efforts against parallel state and recently briefed the Cabinet on FETÖ tactics to cover their tracks, according to Turkish media outlets. Media reports said representatives of every state-run agency would discuss the coordination in efforts to weed out Gülenists. The newspaper Habertürk reported that bureaucrats from a financial watchdog, an international development agency and an agency for Turks living overseas are among those who would attend the meeting. The Habertürk report also said officials would discuss a roadmap for purging the remaining Gülenists and the ongoing legal processes involving the Gülenists, such as a lawsuit against the mass cheating on a civil servant exam, which was blamed on the Gülenists, companies financing the FETÖ and accelerating the capture and extradition of Gülenists that fled abroad after Turkey launched operations against the FETÖ.

Speaking to reporters before the meeting, Akdoğan said the parallel state structure was not just simply a threat against the ruling Justice and Development Party (AK Party) government but also against the wellbeing of the state. "[The parallel state] is a big threat to democracy and law. Their coup attempts through law enforcement and the judiciary aimed to topple the government but it also sought to overthrow all relevant agencies enabling the sustainability of the state. They sought to install a regime that would simply act as a proxy for deeds of foreign powers," he said. The deputy prime minister added that the "phantom and parasitic" parallel state abused "democratic means to hurt democracy," he said. Akdoğan also accused Gülenists of betraying people who had faith in them as a spiritual movement, turning into a network of spies. Police chiefs and prosecutors affiliated with the movement have sought to implicate people close to the government, including sons of former ministers, in a graft probe in 2013.

Although Gülenists are targeted in operations almost daily, it is believed that they still hold key positions in the bureaucracy, police and judiciary. The government plans to amend a widely criticized law that hinders the prosecution of civil servants involved in crimes, according to the media. Authorities have expelled or reassigned hundreds of officials over the past three years for their alleged links to the Gülen Movement, and several others, including former police chiefs, are facing lawsuits in a number of cases linked to the movement, from a cover-up in the murder of prominent Turkish-Armenian journalist Hrant Dink in 2007 to the wiretapping of hundreds of people for the alleged purpose of blackmail.

Along with infiltrators within the state, Gülenists benefit mostly from financing by private companies. Authorities recently stepped up operations to cut off funds to FETÖ by cracking down on companies accused of funneling money to finance "terrorism," according to prosecutors. In recent months, several senior executives of major business conglomerates were detained on charges of financing the organization.