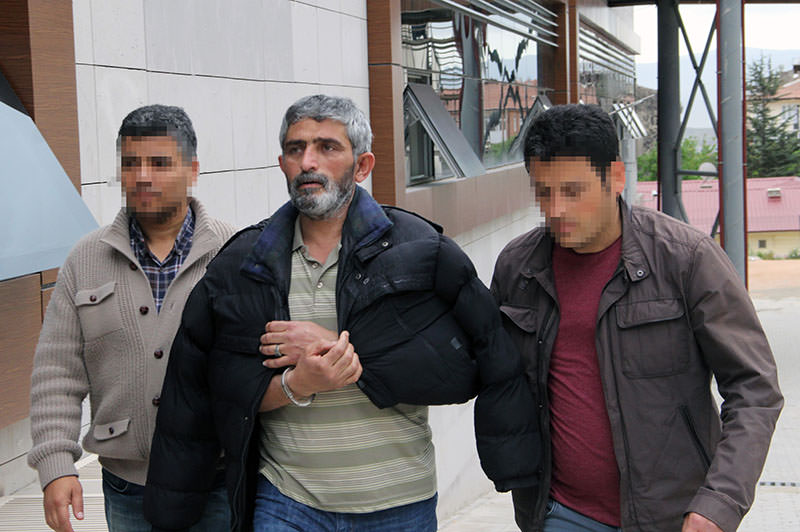 Days after President Recep Tayyip Erdoğan signaled possible cross-border operations in DAESH-held Syrian territory to secure the border town of Kilis, which has continuously been hit by rockets fired from Syria authorities detained senior members of the extremist group and the military hit several DAESH targets in northern Syria. Erdoğan also held a meeting with the governor of Kilis and discussed the security concerns in the province. Police raided six addresses on Monday in counter terrorism operations in the eastern province of Elazığ and detained seven alleged DAESH members who entered the country a while ago from Syria.

One of the detainees is said to be a senior leader of the terrorist group. The suspect, identified only with the initials F.Ş., has reportedly carried out many executions in Syria. The police reportedly also seized many documents belonging to the organization in the raids. Military sources said that 27 DAESH terrorists were killed in the north of Syria's Aleppo province by Turkish shelling and U.S.-led coalition airstrikes on Sunday. According to sources, who spoke on condition of anonymity, the terrorists were detected with the help of surveillance devices and killed on the verge of firing rockets at Turkey.

Since mid-January, DAESH rockets have been targeting Turkey. A total of 21 people, including Syrian refugees in Turkey, have been killed and more than 70 others wounded since then. In three coalition campaigns, terrorists have been killed in the al-Bil, Sheikh Rih, Faydiyuah, Mazraa, Tal Hishin and Baragitah regions, sources say.

The raids and intensified cross-border shelling came three days after President Recep Tayyip Erdoğan said that Turkey is preparing to "clean" the Syrian side of the border of DAESH.

"We are making all the necessary preparations to clean the other side of the border because of the problems in Kilis," he said amid persistent speculation of a possible cross-border ground operation, without giving details of the preparations.

Turkey, a member of the U.S.-led coalition battling DAESH, has received almost none of the support it wanted from its allies in the fight against the extremist group and has indicated Ankara is prepared to take unilateral action. "While our citizens fall dead every day in the streets of Kilis by rockets launched from [Syria], what can we expect from our allies? Let me say it here. We will not hesitate to take needed steps on our own if necessary," Erdoğan said.

Erdoğan said what happens in Kilis would be a "litmus test" to show the anti-DAESH coalition's sincerity in dealing with the threat. "We do not believe the sincerity of any country that has not seen rockets falling on our town as if they fell on Moscow, London, Brussels, Washington, Paris or Berlin," he said.

The artillery strikes near Kilis, north of Aleppo, started at about 8 p.m. and ended in the morning, the sources said. Intelligence reports had suggested the militants were preparing attacks, they said.

The airstrikes destroyed a two-story building used by the militants as a base along with 11 fortified defensive positions, they said. The Turkish and coalition operations targeted an area about 10 kilometers south of the border.

The TSK have stepped up attacks on DAESH in Syria in recent weeks after rockets fired by the group repeatedly landed in Kilis, in what appeared to be a sustained and deliberate assault. More than a dozen rockets hit the since start of the month.

Erdoğan said last week that Turkey's armed forces had killed 3,000 DAESH terrorists in Syria and Iraq, where Turkish soldiers are training local forces to fight the insurgents. "While countries [taking part in the anti-DAESH coalition] didn't take any steps, didn't conduct the necessary intelligence-sharing, Turkey was expected to do everything."

"In fact, during this process, Turkey battled many unfair, ruthless and unfounded accusations," Erdoğan said. "The portrayal of Turkey as a country that helps DAESH is – excuse me if this will sound harsh – despicable."

Officials reveal DAESH plans to attack Atatürk's mausoleum on May 19

According to military sources, the DAESH extremist group had planned to conduct a series of attacks on military posts across the country. The HaberTürk daily cited intelligence sources, saying that DAESH has been preparing to attack the Anıtkabir – Mustafa Kemal Atatürk's mausoleum – in Ankara on May 19, which is Youth and Sports Day. The United States Embassy in Ankara and the military barracks in the Cebeci neighborhood of the capital city were also cited as targets. It was further reported that 73 handmade explosives found in the eastern province of Siirt were to be used by the PKK in metropolitan cities across the country.