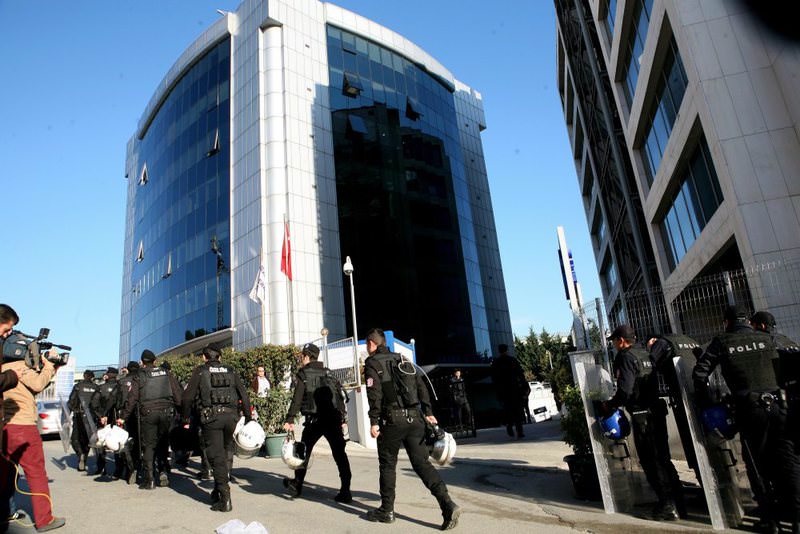 Riot police outside the Istanbul headquarters of Kaynak Holding, a major business conglomerate. Trustees were appointed to Kaynak last year by the court on charges of having links to Gu00fclenists.
by Hasan Ay May 17, 2016 12:00 am

A report from the State Audit Board, tasked by the president to investigate the controversial Gülen Movement, says 6,500 companies are affiliated with the Gülen Movement, a financial network worth $150 billion

Gülenists, led by fugitive cleric Fethullah Gülen who is charged with running a terror organization and two coup attempts in 2013, face a new inquiry from the presidency, the highest authority in Turkey. The State Audit Board, a public sector watchdog directly answerable to the president's office, recently started an investigation into Gülen Movement infiltrators within the state. The report also delves into how Gülenists maintain their organization and their financial sources. It claims that there are 6,500 companies in Turkey linked to the Gülenists and says the movement has "a financial network with a turnover of $150 billion."

Authorities have recently stepped up operations to cut off financial support to the organization, which is designated as "a national threat" by Ankara and listed as a terrorist organization by prosecutors, who have called it the Gülenist Terror Organization (FETÖ).

In March, two senior executives Hacı Boydak and Memduh Boydak, from the prominent Boydak business conglomerate, were arrested on charges of financing FETÖ. One week later, police raided the offices of another business conglomerate Naksan, and detained four employees on charges of funding FETÖ. One month later, executives of an Istanbul-based construction company were rounded up as suspects in an investigation into the financing of FETÖ.

The State Audit Board report highlights 400 companies running schools or other educational institutions among the financiers of the organization. Gülenists are known for a vast network of schools spanning the globe. They operate under different names and are run by different companies or foundations. In Turkey, the board has launched an inquiry into the affairs of "foundation universities" or private-run universities run by Gülenists.

The board's research was revealed by President Recep Tayyip Erdoğan in January. Addressing local administrators during a meeting in Ankara, Erdoğan said that the board and other state agencies were closely following the efforts against the Gülen Movement, saying this "is the primary task of the State Audit Board. I ordered them to inspect all state agencies for (Gülenists) and refer anyone found working for the movement to the judiciary. This is a matter of national security. Anyone found negligent in allowing Gülenists will be brought to justice," he said. Authorities have also recently shed light on a scheme by Gülenists to transfer money from unsuspecting followers and donors to charities to fund a U.S.-based company linked to the movement. Prosecutors investigating another "himmet" scheme found that "imams," meaning point men carrying out orders from Fethullah Gülen, collected money during conventions from followers of the movement and diverted these funds to finance a company in the United States. The suspects are accused of collecting about TL 15 million ($5.3 million) from low-ranking members under the guise of donations for "the renting of Gülenist schools, the construction of new schools and aid to the poor."

The Gülen Movement has seen members and sympathizers purged from state institutions, the police and judiciary. It was designated by authorities as "a national threat," a classification for terrorist organizations.

A string of judicial inquiries over the past two years has revealed the seedy side of the movement, which promotes itself as a charity group that simply runs schools and works for interfaith dialogue. Gülenists are accused of illegally wiretapping thousands of people, from the prime minister to journalists and prominent figures. They are also accused of imprisoning critics or anyone seen as an obstacle to the movement's attempts to gain further clout, and have used sham trials to silence opponents. Hundreds of generals, academics and dignitaries were detained for years, in cases where they were accused of staging coups. It was later revealed they were detained on charges based on false evidence planted by Gülenist members planted in law enforcement. More than 2,260 people were detained in operations across Turkey since FETÖ was designated as a terrorist organization, according to a report from Milliyet newspaper which appeared on the weekend. Seventy-four-year-old Fethullah Gülen, currently residing in Saylorsburg, Pennsylvania, has denied charges in trials where he faces a life sentence for coup attempts and other crimes, but refuses to testify in court in Turkey. Ankara seeks his extradition from Turkey's NATO ally, the United States, but the process is expected to be dragged down by the complicated bureaucracy involving extradition.
RELATED TOPICS