14 suspects linked to Gülenists, including Gülen's nephew arrested after operations in western Turkey 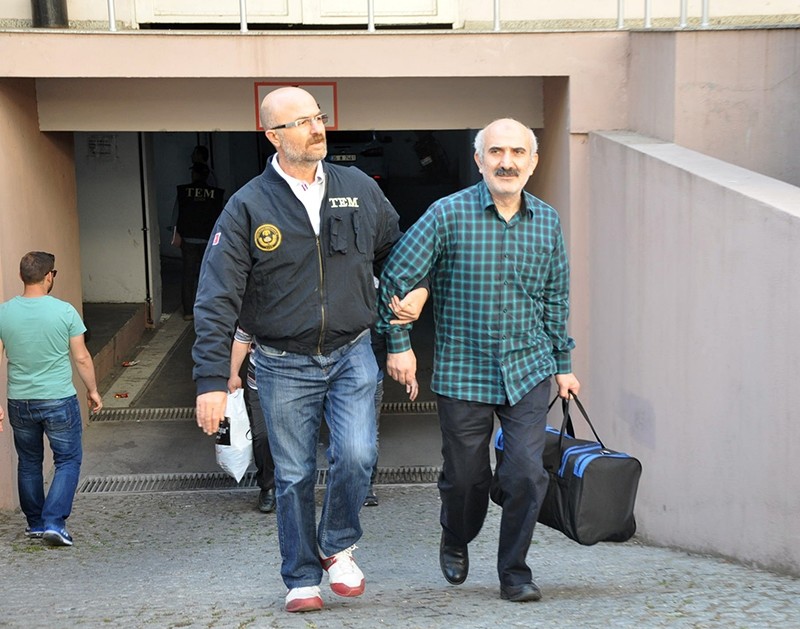 Mezher Gu00fclen, the nephew of the movement's self-exiled leader, Fethullah Gu00fclen, was also among the arrested. (IHA Photo)
by Daily Sabah May 21, 2016 12:00 am
An İzmir court ordered Saturday the arrest of 14 suspects with links to the Gülenist Terror Organization (FETÖ), including Gülen's nephew, Mehmet Mezher Gülen who is allegedly in charge of all Gülenist private and preparatory schools across Turkey.

The İzmir Criminal Magistrate of Peace arrested 14 suspects while releasing 17 others on judicial control.

The court procedures of 31 suspects who had been detained Tuesday in two operations against the alleged Gülenist Terror Organization (FETÖ) were completed by the İzmir Public Prosecutor's Office Saturday.

Mezher Gülen, the nephew of the movement's self-exiled leader, Fethullah Gülen, was also among Tuesday's detainees.

Gülen, who is the prime suspect in a number of FETÖ cases involving terrorism, is wanted by Turkish courts where prosecutors seek multiple life sentences. Gülenists are accused of attempting coups using infiltrators in the police and judiciary who were behind two judicial inquiries seeking to imprison relatives and acquaintances of government officials in 2013 on trumped-up charges. Since then, thousands of Gülenist infiltrators have been purged from their positions and authorities launched a crackdown on the Gülen Movement.

This is not the first time that the relatives of Gülen were implicated in FETÖ cases. A trial where several police officers are accused of covering up the involvement of Gülen's deceased brother and one of his nephews in the rape of a mentally disabled girl in the fugitive cleric's hometown Erzurum is still underway.

In related news, Hacı Boydak, the former executive of the business conglomerate Boydak, was released Monday from prison after he and other executives, including his brothers, were arrested in March on charges of financing the FETÖ. A court in Kayseri where Boydak is headquartered ruled for the release under judicial control and issued a ban to travel abroad for Boydak while prosecutor's office objected to the verdict. The court sustained the detention of his brother, Memduh Boydak. Another brother of Hacı Boydak was released earlier on judicial control.

The image of Gülenists as members of a religious movement has quickly dissolved since it was revealed the group was behind attempts to overthrow the government by implicating those close to the Ankara administration in a series of judicial probes in December 2013. Since then, hundreds have been forced to resign from their positions and the movement's alleged financiers, including renowned business figures, are in custody and accused of funding terrorism.

FETÖ, originated from the shady Gülen Movement that was behind a string of crimes ranging from fraud, blackmail, illegal wiretapping, sham trials apart from the coup attempts, is accused of cultivating profits from private-run universities it ran in the country. Gülenists used to be primarily known for their global network of schools and as a religious group led by U.S.-based former preacher Fethullah Gülen.

However, operations over the past three years revealed the group's seedy side as an omnipresent entity that infiltrated the police, judiciary and bureaucracy, scheming to weed out its critics and overthrow the government.

The 74-year-old Fethullah Gülen, who currently resides in Saylorsburg, Pennsylvania, has denied charges in trials where he faces a life sentence for coup attempts and other crimes, but refuses to testify in court in Turkey. Ankara seeks his extradition from NATO ally the United States, but the process is expected to be dragged down by the complicated bureaucracy involving extradition.
Last Update: May 21, 2016 9:24 pm
RELATED TOPICS