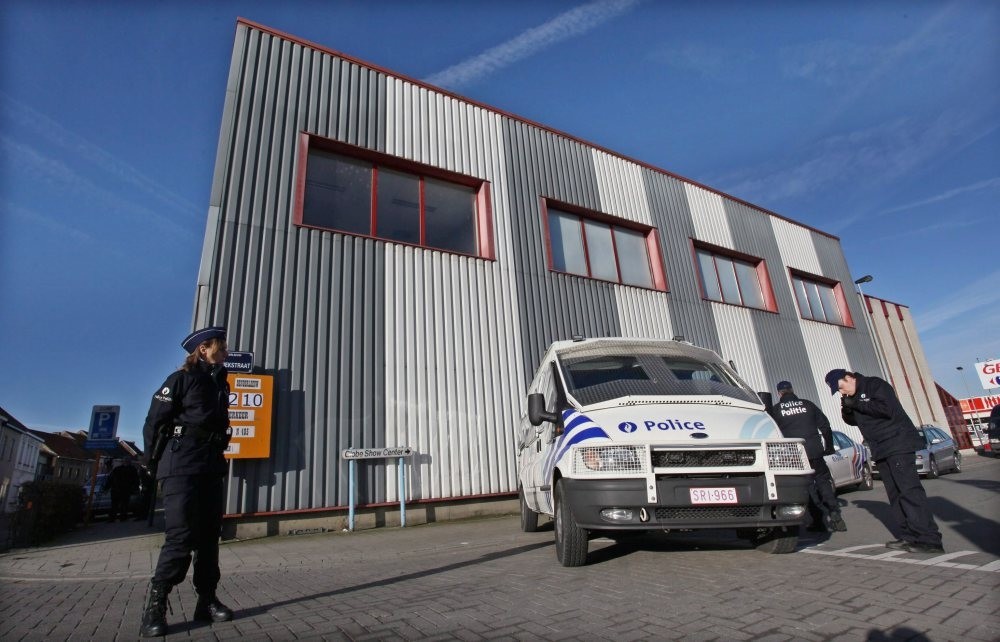 Police officers in Belgium stand outside offices of Roj TV in 2010 during an operation into the PKK-linked station, which is based in Denmark.
by Daily Sabah with AP Jun 09, 2016 12:00 am

A Danish court Wednesday overturned the acquittal of two supporters of the PKK, the terrorist organization responsible for multiple attacks in Turkey, on charges of funding the group. The verdict is a rare instance in Denmark of a court taking a stance against activities by the otherwise tolerated PKK

Denmark's long-standing tolerance for the PKK terrorist organization and its supporters may be coming to an end, as signaled by a court verdict Wednesday.

The Eastern High Court of appeals based in Copenhagen ruled that two men were guilty of financing terrorism for funding PKK activities, effectively overturning a decision by a lower court to acquit them.

The PKK, which is currently carrying out a campaign of terrorism focused on southeastern Turkey, is designated as a terrorist organization by Turkey, the United States and the European Union, of which Denmark is a member. Along with attacks targeting security forces and civilians in southeastern and eastern Turkey, the group was also linked to two deadly bombings in Ankara in February and March, which killed 63 people.

The defendants were among 10 people charged with funding the terrorist organization between 2009 and 2012.

Roj TV is based in Denmark, and has offices in other European countries, including Belgium. Danish prosecutors moved to revoke its broadcast license two years ago, although a legal process of appeals by the TV station continues and the channel remains on the air. The channel was founded in 2004, and was subject to Ankara's repeated calls to Copenhagen for its closure due to its links to the terrorist organization. Roj TV denies links with the PKK, although it follows a strictly pro-PKK broadcasting policy.

Turkey has also heavily criticized Denmark after 10 defendants in the case were released in 2014. The Foreign Ministry released a statement that said, "Fighting the financing of terrorism is an international obligation for Denmark, as well as every country. Therefore explanatory information has been demanded from Danish officials about precautions taken against terrorism financing, including the case history." The Danish court ordering their release reasoned that the defendants were unaware that their financial contributions to Roj TV would support the PKK.

Denmark, along with Belgium, is among the European Union countries that Turkey has accused of adopting a lenient approach to the activities of the PKK, in a continent where most PKK militants find political asylum. Denmark and Belgium were recently criticized for allowing supporters of the terrorist organization to openly demonstrate and pitch tents in Copenhagen and Brussels.

A tent adorned with posters of jailed PKK leader Abdullah Öcalan, and a flag for the terrorist organization was set up outside the Danish parliament earlier this year, despite protests by the local Turkish community.

President Recep Tayyip Erdoğan has often criticized Europe's approach to the PKK. He recently slammed Belgium's decision to allow supporters of the PKK terrorist organization to pitch tents outside the Turkey-EU summit venue in Brussels in March. He said that countries that "directly or indirectly support terrorist organizations nurse a viper in their bosom." Warning Europe that its cities faced the kind of attacks that Turkey has suffered in recent months, perpetrated by PKK-linked groups as well as DAESH, Erdoğan said, "Despite this clear reality, European countries are paying no attention, like dancing in a minefield."

The PKK broke an almost two-year-long unilateral cease-fire with the Turkish state in July 2015, and resumed its armed campaign, which has seen civilians targeted. Hundreds of police, military officers and civilians were killed by PKK attacks, while the Turkish military has conducted a campaign both in Turkey and in the mountainous regions of northern Iraq, where senior PKK cadres hide out. Airstrikes in northern Iraq, as well as operations in southeastern and eastern Turkey, have killed thousands of militants.
RELATED TOPICS