Reza Zarrab will seek to dismiss US indictment, oral arguments in September 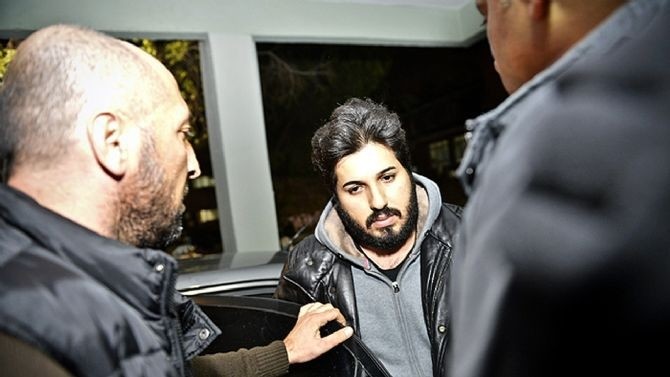 Iranian-born Turkish businessman Zarrab arrested in US for evading Iran sanctions
by Ragıp Soylu Jun 20, 2016 12:00 am

The lawyer for Turkish-Iranian businessman and gold trader Reza Zarrab said on early Monday in a Manhattan court that he was considering filing an appeal on a federal judge's decision to deny bail for his client and would seek to dismiss the indictment in the upcoming months.

Lawyer Benjamin Brafman and prosecutors in the office of Preet Bharara, the United States attorney for the Southern District of New York also discussed the scheduling of the trial. U.S. District Court Judge Richard Berman scheduled a pre-trial conference on September 6 in which both sides would present their oral arguments on the veracity of the indictment.

Zarrab, who was arrested in March upon his entry to the U.S. in Miami, is facing a maximum 75 year sentence for evading a U.S.-imposed sanction on Iran with multiple money transfers, appeared calm in court despite the possibility of waiting in prison for more than six months until the trial date set for January 2017.

Zarrab's Turkish lawyer Şeyda Yıldırım said they were going to carefully consider filing an appeal against the bail decision, possibly in a week.

Turkish-American lawyer Cahit Akbulut, who is following the case very closely, said that Judge Berman would most possibly deny the request to dismiss indictment. Brafman and U.S. prosecutors will file their motions regarding the indictment in mid-July and August. Akbulut, referencing the bail decision, underlined the fact that the judge already considered the evidence and concluded that the charges pending for Zarrab are serious.

"It is highly possible that he would not dismiss the indictment. I also don't think that Brafman would file the appeal because he has to work with this judge in upcoming months." he said.

His guess is that Zarrab might end up cutting a plea deal and cooperate with the U.S. prosecutor's office to receive a lesser sentence.

Prosecutors and judges in Turkey linked to the controversial U.S.-based imam Fethullah Gülen also went after Zarrab in Dec. 2013 on charges of illegal financial transactions to Iran and bribing public officials.

Zarrab's Turkish lawyer Şeyda Yıldırım has previously told a British news wire that his arrest had nothing to do with the Dec. 17, 2013 operation. Preet Bharara also confirmed that two cases were not linked.

Turkish authorities consider the so-called corruption inquiry as a plot perpetrated by members of Pennsylvania-based imam Fethullah Gülen's movement to topple the government. Gülen, a former ally of President Recep Tayyip Erdoğan who fell out with the government over peace negotiations with the PKK terrorist group, is known for his huge follower base in the Turkish judiciary and police.

U.S. Judge Berman's visit to Istanbul in 2014 to attend a symposium also created a controversy about Zarrab's case. According to the official website of the Venice Commission, which sent a delegation to the event, the symposium was organized by the Yüksel Karkın Küçük Attorney Partnership. The Sabah newspaper last month reported that the law firm had significant ties with the Gülen Movement. Hürriyet daily also independently confirmed that the firm has been known for its involvement with Gülen Movement-related cases.

Judge Berman, when he visited Istanbul in 2014, gave a brief interview to Today's Zaman, which was seized by the government in January due to its links with the Gülen Movement. His comments were directly related to the December 2013 corruption case in which Zarrab was acquitted.

Berman told Today's Zaman that legal proceedings related to the corruption case had been interrupted. He criticized the government's legal amendments in response to the inquiry in order to restore the independence of the courts and said it was inappropriate to change the rules of the game while the game is taking place.

Berman also sided with EU officials who were concerned about the developments in Turkey regarding the changes that brought more power to the justice minister. He even personally criticized then Prime Minister Erdoğan, saying he did not respect the Constitutional Court's overruling of the Twitter ban. Berman said Erdoğan's comments sent a bad message to Turkish citizens.