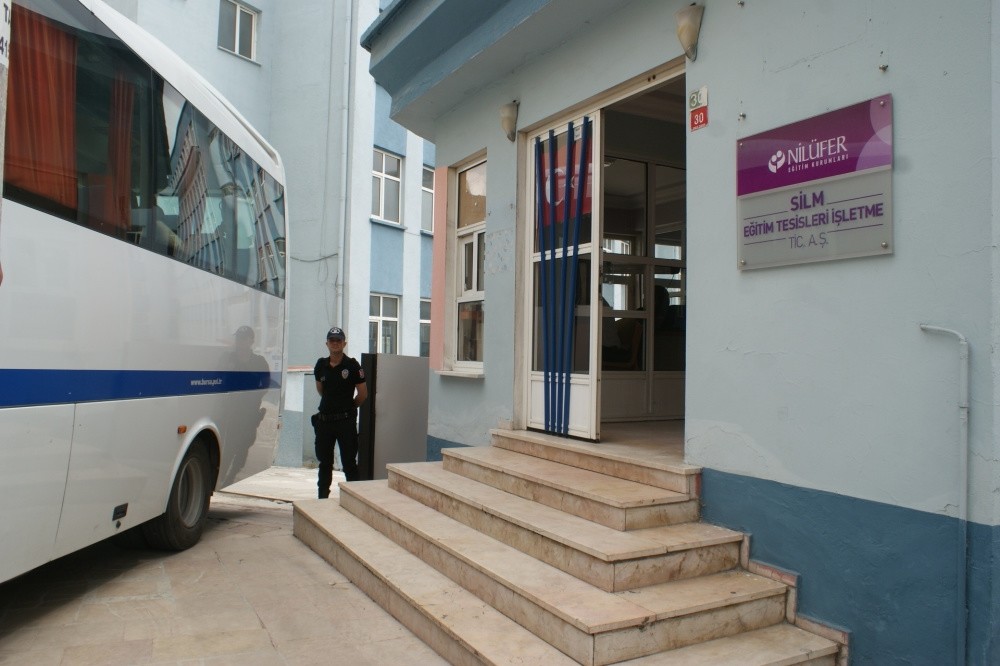 A police officer stands outside a Gu00fclen-linked school after a raid in the western city of Bursa.
by Safure Cantürk Jul 05, 2016 12:00 am
Gülenists are feeling the pinch as authorities crack down on the controversial movement's schools. Since the end of 2013, when the Gülen Movement allegedly twice attempted to overthrow the government, government trustees were appointed to six universities and 400 lower learning institutions, from primary schools to high schools, in legal moves to prevent the schools from operating as part of an alleged terrorism network.

Judicial inquiries have thus far focused on companies and nongovernmental organizations (NGOs) accused of funding the Gülenist Terror Organization (FETÖ), an offshoot of the Gülen Movement. Nonetheless, the main sources of income for the Gülen Movement are privately-run schools, and the movement's prep schools were wildly popular in Turkey before the government made efforts in 2013 to close them down, incurring the wrath of Gülenists. Gülenists reportedly control a vast network of educational institutions, including primary schools, middle schools and high schools, known as "colleges" in Turkey. These bring in revenue as well as provide a recruiting ground for prospective Gülenist recruits.

The Gülen Movement started out as a religious group before evolving into a powerful, politically-charged entity and later into a terrorist organization which experts say depended on education to both advance its ideology as well as swell its funds.

Since 2013, the Gülen Movement has faced a barrage of trials and a nationwide crackdown. Courts often appoint trustees to companies, schools etc. associated with Gülenists to prevent further funding of FETÖ. A state-run audit board is already running a probe into 17 universities associated with Gülenists. An investigation into the Şifa and Fatih universities revealed that boards at both schools sold university assets to Gülenists for low prices and through fraudulent sales. Universities were burdened with heavy debts due to fraud and often unable to pay lecturers, causing a disruption of education for hundreds of students who had paid their tuition in advance.

Gülenists are accused of illegally wiretapping thousands of people, from the prime minister to journalists and prominent figures. They are also accused of imprisoning their critics or anyone seen as an obstacle to the movement's attempts to gain further clout, and have used sham trials to silence opponents through exploiting operatives in the police, judiciary and upper echelons of bureaucracy. Hundreds of generals, academics and dignitaries were detained for years, in cases where they were accused of staging coups, charges later revealed to be based on false evidence planted by Gülenist infiltrators in law enforcement.

Authorities have recently stepped up operations to cut off financial support to the organization, designated as "a national threat" by Ankara and listed as a terrorist organization by prosecutors.

The State Audit Board, a public sector watchdog directly answerable to the president's office, said in a report that there are 6,500 companies in Turkey linked to the Gülenists, adding that the movement has "a financial network with a turnover of $150 billion."

In March, two senior executives, Hacı Boydak and Memduh Boydak, from the prominent Boydak business conglomerate, were arrested on charges of financing FETÖ. One week later, police raided the offices of the Naksan business conglomerate and detained four employees on charges of funding FETÖ. One month later, executives of an Istanbul-based construction company were rounded up as suspects in an investigation into the financing of FETÖ.

Gülenists are known for a vast network of schools spanning the globe. They operate under different names and are run by different companies or foundations.
RELATED TOPICS