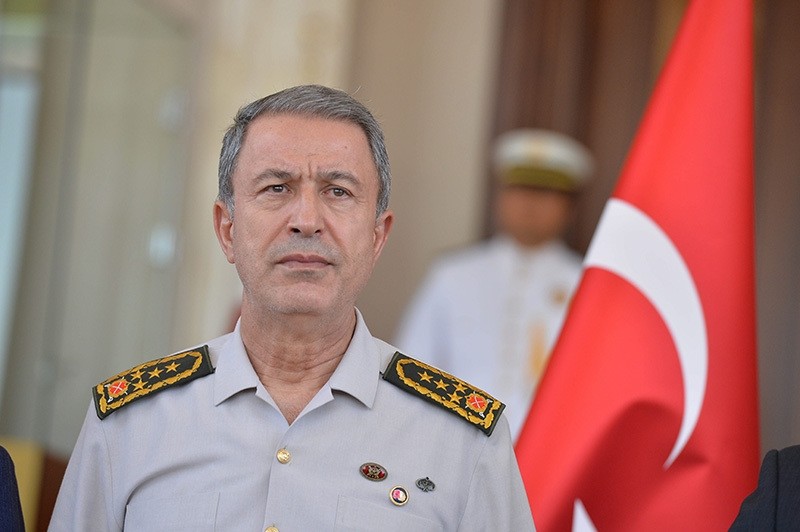 Chief of Staff Akar, with clear bruises on his neck resulted from scuffles with coup plotting soldiers, is seen on July 17 in Ankara during his first appearance following the coup attempt. (Photo: Sabah / Ali Ekeyu0131lmaz)
by Daily Sabah with AA Jul 25, 2016 12:00 am

Turkey's Chief of Staff Hulusi Akar said Monday in his testimony during prosecution that the putschists tried to make him speak to Fethullah Gülen, the leader of the Gülenist Terror Organization (FETÖ) and the shadowy Gülen Movement.

Akar stated that Brigadier General Hakan Evrim tried to convince him to talk to Gülen during the coup attempt, but he refused to do so.

He added that he tried to persuade coup-plotting officers to give up their attempt before anyone was killed.

"Major General Mehmet Dişli sat on a chair next to my table and said in an anxious manner 'Sir, the operation is starting, we will round up people, battallions, brigades are on their way, you will see a little bit later.' At first I couldn't make any sense of it, maybe he said planes inside the sentence, but I figured out that this was something that I could describe as a coup attempt and yelled in rage 'What the hell are you saying, what operation, are you a maniac, never.' I did not notice if the door was open or not as I was facing backwards. I asked where the deputy chief of staff and other commanders are. He [Dişli] replied by saying 'Don't worry, stay calm, he will come.' I keept asking questions like "I wouldn't have anything to do with you, some other or others involved in such of a business, how can you talk to me like this, who are these people, who are you?' I was very angry." Akar said in his statement.

"I said the road they are taking is wrong, they are getting drowned in a swamp, they will pay for it, they should at least show some manhood and end this thing before others were involved and deaths occur, and immediately stop this attempt. But I couldn't convince them. He said 'Sir, this is over and everyone is on their way.' It was Brigadier Gen. Hakan Evrim who tried to get me in touch with Gülen." Akar added.

"I said 'You have disgraced the history of Turkish Armed Forces, the only place you'll be going is the public prosecutor's office.' [President] Erdoğan's speech destroyed the hope of putschists. I told them you made it worse than a war; go turn yourselves in. As time passed, the morale of the putschists has collapsed."

"Brigadier Gen. Hakan Evrim said that he could get me in touch with their opinion leader Fethullah Gülen if I wished; I scolded him saying that I wouldn't get in touch with anyone. I insistently told General Akın Öztürk to talk them [coup-plotters] out of it. I objected them and told them to stop fooling people. They then said 'Okay Sir, we are giving up' and told me that they will get me in touch with the president or the prime minister. They ended their attempt."

Akar said he "never even touched" the manifesto which the coup soldiers wanted him to read and sign to topple Turkey's democratically elected government.

"When they read their manifesto to me, I listened cynically and without any interest," Akar said.

"Those traitors even call their junta attempt as 'Peace at Home Council', they did not say anything about who are the members of their mentioned council," Akar said.

"I believe those coup-plotters are members of this organization [Fetullah terrorist organization]. I think they thought their organization would take a huge blow after our Supreme Military Council meeting in August -- in which we prepared for studiously," Akar said.

Akar was forcefully detained by coup-plotting officers at his post in Turkish General Staff during the July 15 coup attempt and was brought to Akıncılar Air Base, which was being used as the headquarters of the coup attempt.

At least 246 people, including civilians and security personnel, were killed, and nearly 2,200 people were injured during the July 15 failed coup attempt carried out by Gülenists within the military.