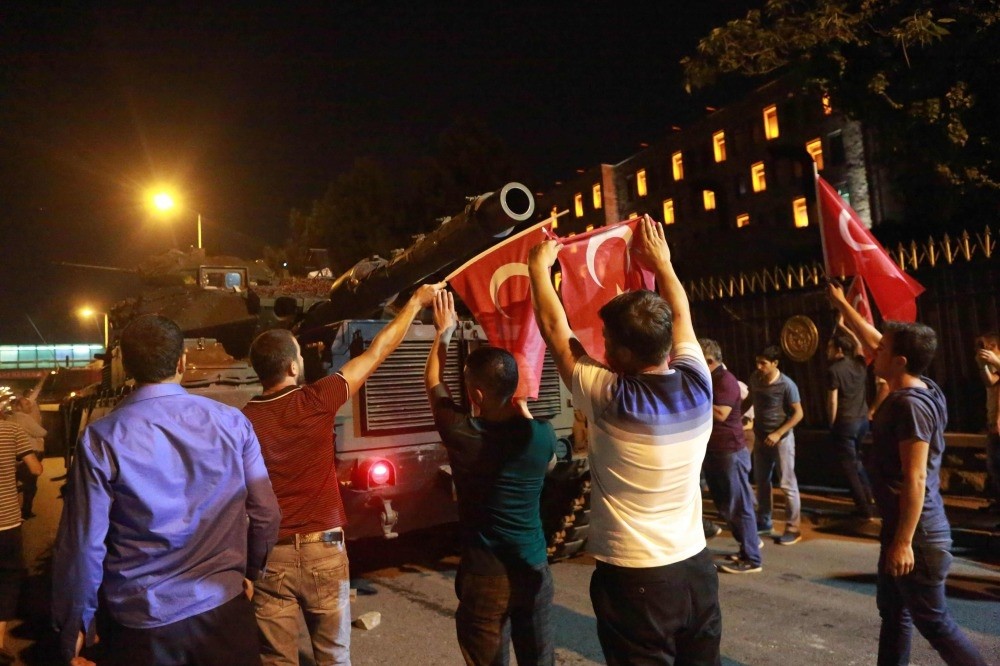 People stand up against tanks manned by coup troops in the capital Ankara. Adil u00d6ksu00fcz was captured in a main air base in the city after the coup attempt.
by Yüksel Temel Jul 26, 2016 12:00 am

A university lecturer thought to be a representative of Fethullah Gülen remains on the run after he was released following detention at a military base on the night of the July 15 attempted coup. Following an investigation, Adil Öksüz has been accused of relaying Gülen's orders to officers plotting the coup

Security forces which stormed an air base near Ankara to capture military officers responsible for running an attempted coup found someone who did not look at all like a soldier. Adil Öksüz was the only civilian at the Akıncı base, from which jets manned by coup pilots took off to hit strategic locations. Although he claimed he was there because he was detained by soldiers while walking near the base, it was later discovered that Öksüz, a theology lecturer at Sakarya University in northwestern Turkey, was a prominent Gülenist figure. Further investigation revealed Öksüz was tasked with relaying orders from Gülen to coup plotters both before and during the July 15 coup.

Security sources say Öksüz was an "imam," the name given to Gülen's representatives in police, judiciary and other institutions, to coup plotters within the Turkish Air Force. Öksüz allegedly started holding meetings withGülenist Terror Organization (FETÖ) junta officers planning an attempted coup six months before the coup attempt, relaying Fethullah Gülen's instructions on how to carry out the coup. He was the only civilian among the 98 people detained by soldiers loyal to the democratically-elected government who rescued Chief of Staff Gen. Hulusi Akar and other top commanders of the army from the Gülenist junta, after they were held hostage for hours. Police believe Öksüz is now in a Gülenist hideout and may flee abroad, a common practice for Gülenists facing lawsuits and arrests in Turkey. Since Gülenists openly declared a war against Turkey with their first coup attempt in 2013, many of the movement's followers, ranging from prominent judges to police officers tied to Gülenists, have fled to Europe and the U.S., the latter the residence of Fethullah Gülen.

The revelation follows the seemingly inadvertent release of Öksüz following his initial detention. Judges who ordered his release on the grounds of lack of evidence now face legal inquiry. The whereabouts of Öksüz are not known, but findings after his disappearance have confirmed fears of authorities that they might have overlooked an important figure who might shed light on a Gülenist connection to the coup attempt.

Police raided the addresses that Öksüz gave them as residence during his stay in Ankara, but found no evidence, while his cellphone was apparently discarded. Adil Öksüz is described as a "black box" for FETÖ with extensive knowledge of the network of infiltrators from the terrorist organizations within the army. Reports suggest that he has been working with and receiving orders regarding FETÖ military activity from Mustafa Özcan, who is known to be FETÖ's leader within Turkey.

Özcan allegedly became the air force figure of Gülenists in the military after their former leader Hamidullah Öztürk escaped to Brazil.

Gülen is accused of utilizing point men known as "imams" to relay his orders from the compound where he lives in exile in Pennsylvania in the U.S. to FETÖ members. Some 32 "imams" identified by prosecutors have fled abroad as the state has stepped up efforts to purge Gülenists.

Although his movement started out as a religious group, Fethullah Gülen converted his Hizmet movement to a politically charged entity opposing the government. It was later designated as a terrorist organization following two coup attempts in 2013, but it was not until July 15 that the Gülenist Terror Organization (FETÖ) made their most violent attempt to seize power. Hundreds of law enforcement personnel and civilians were killed when the Gülenist junta indiscriminately fired on anti-coup activists, soldiers and the police.

Gülen has denied his involvement in the coup attemptm although evidence and confessions of captured coup officers has shown otherwise. Coup officers have confessed to pledges of loyalty to Gülen, while several Gülenist figures like Öksüz and a former police chief linked to FETÖ were caught in action with the coup actors.
RELATED TOPICS