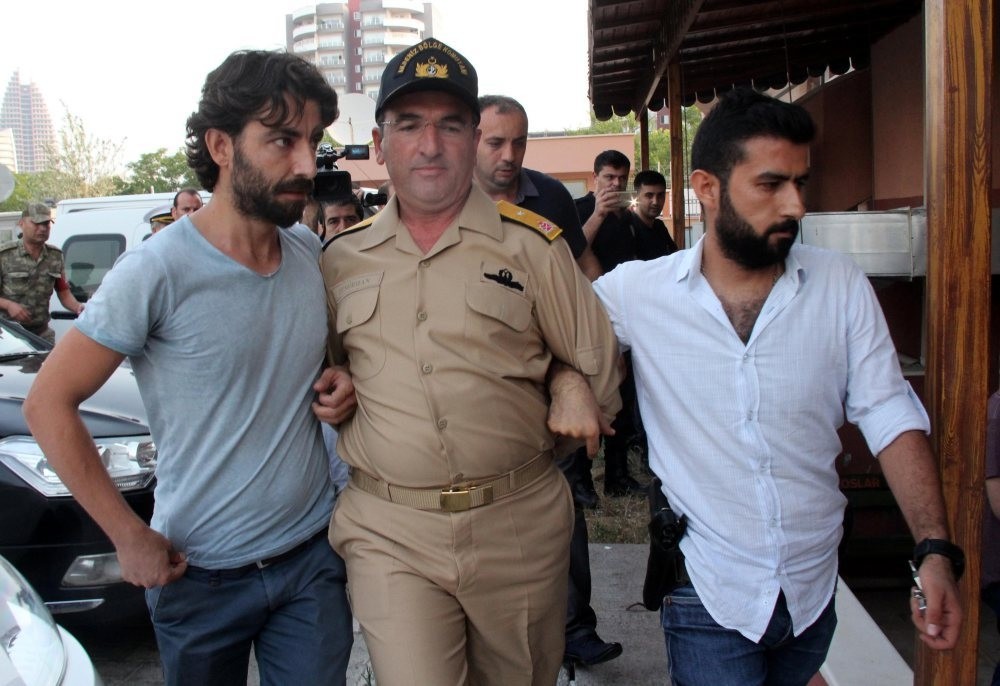 Adm. Nejat Demirhan detained on coup charges is also among detainees in plot case.
by Daily Sabah Jul 27, 2016 12:00 am
Gülenists, the shady members of the Gülenist Terror Organization (FETÖ) are accused of orchestrating the July 15 coup attempt, facing new police raids on charges of plotting the imprisonment of military officers not linked to the group. As part of an investigation carried out in the western city of İzmir, police yesterday detained 20 people in 22 cities and detention warrants were issued for 70 others.

The detainees are being interrogated for their links to FETÖ in the investigation into the terrorist group's involvement in the Turkish Armed Forces (TSK). Fifty-five suspects are military officers from ranks of generals to a colonel who served as an aide to the former Chief of Staff Yaşar Büyükanıt. In addition to those detained in yesterday's operations, other suspects who have already been placed into custody include generals involved in the coup attempt. Fatih Celaleddin Sağır, a general who confessed to being a member of the Gülen Movement along with sixteen others are suspects in the İzmir plot case.

Sixty-eight defendants are already on trial for plotting to imprison military officers and others using forged evidence to implicate them on charges of supplying confidential information to foreign intelligence services. In 2010, the İzmir branch of the National Police Department launched an investigation based on an anonymous tip received via email, detaining 357 people; including high-ranking officers. Defendants were found to be in possession of confidential information about military facilities based on evidence that they were collecting the information with the purpose of giving it to foreign intelligence service agents, according to the indictments. Officers have long denied the charges, claiming they were implicated with charges based on false evidence. They claim the evidence, consisting of videos and documents found on their computers, was "planted." A court ruled for their acquittal in February, six years after the case was opened and three years after Gülenists attempted to stage two coups, according to prosecutors.

The İzmir case is widely seen as another attempt by Gülenists to infiltrate the Turkish army and purge army officers considered a threat to their presence in the ranks, through sham trial organized by Gülenist police officers and prosecutors organizing the trial. Gülenists are also accused of similar sham trials; namely, the infamous Balyoz (Sledgehammer) and Ergenekon trials, where hundreds of officials, mostly military officers, were imprisoned on accusation of planning a coup, only to be released and acquitted years later.

Fethullah Gülen, the U.S.-based head of the Gülen Movement and Tarık Toros, a former journalist for a newspaper viewed as a Gülenist mouthpiece, are among other suspects in the plot to imprison officers. Twelve suspects also wanted in the case are believed to have fled abroad. Many Gülenist figures have fled the country in the wake of the purge of FETÖ members from the judiciary, the police force and bureaucracy, as well as in the wake of subsequent investigations into their illegal activities that have been ongoing since 2013, the year when FETÖ launched an all-out assault against the state with two coup attempts.