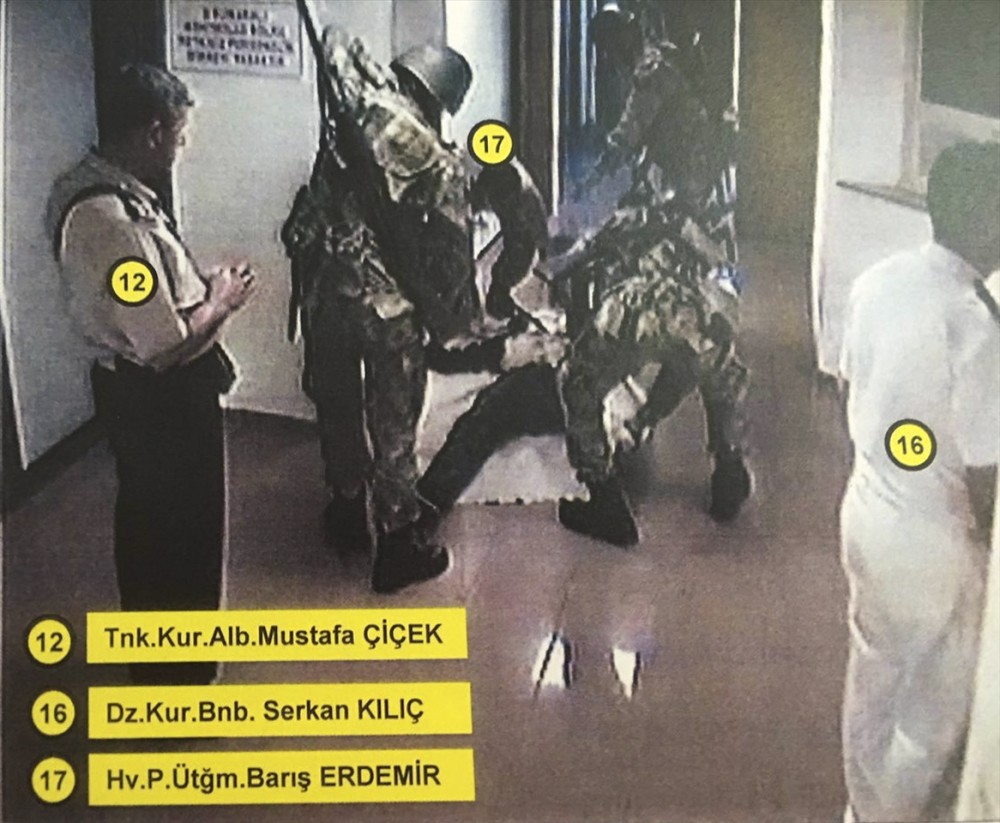 New security camera footage from July 15, the night the failed coup took place, has been recovered by police as a part of an investigation by the Public Prosecutor's Office in Ankara. The footage, which was taken from the headquarters of the Turkish Land Forces, shows Brig. Gen. Arif Pazarlıoğlu watching the latest news on the coup attempt on TV. The footage also features Staff Col. Osman Kardal, Staff Capt. Recep Yıldız and Staff Maj. Erhan Metin. Maj. Ali Gültekin and Maj. Oğuzhan Konuk are also seen holding machine guns.

As a part of the investigation, a 20-page martial law directive belonging to the putschists has also been found. The document, which is reportedly to been sent to all state institutions, reveals that the real intention of the putschists was to initiate the coup attempt at 3 a.m. on July 16, which means that the coup plotters mobilized almost five hours earlier than planned. The so-called martial law directives, which bear the signatures of Brig. Gen. Mehmet Partigöç and Staff Col. Cemil Turan, reveal that a small part of the Turkish Armed Forces (TSK) planned to seize power on July 16 at 3 a.m. and declare martial law. It is also revealed that the coup plotters planned to declare a curfew starting from 6 a.m. and assign military officials to crucial positions in the state institutions as well as local government. The putschists also aimed to turn military courts into martial law courts and assign military personnel to obey every rule declared by these courts.

The sixth article of the so-called martial law directives states that the assignment in state institutions is to be carried out by "Yurtta Sulh Komitesi" (Peace at Home Committee), as the coup plotters called themselves, and present a detailed plan about the security measures to be taken in Ankara and Istanbul.

The so-called martial law that coup plotters prepared showed that if the coup attempt had been successful, the putschists would have adjourned Parliament, which is the embodiment of democracy in Turkey. Moreover, the putschists wanted to discharge all governors and close all political parties.

The most frightening thing, on the other hand, is that the so-called document also promises that those who wronged the Republic of Turkey will be punished in the martial law courts, which indicate that many innocent people would have been put to trial in the courts without a reason. The martial decree demonstrates that the coup plotters planned to close every airport, harbor and custom station in Turkey, starting from July 16 at 3 a.m., and declare an international travel ban for all Turkish citizens.

The coup plotters further aimed to ban all demonstrations around Turkey, which is a democratic right for Turkish citizens as well.

The coup attempt was orchestrated by members of the Gülenist Terror Group (FETÖ) and U.S.-based Fethullah Gülen, who is accused of pursuing a long-running campaign to overthrow the government through supporters within the Turkish state, particularly the military, police and judiciary.

As a result of the attempted coup, 237 people were killed, including 41 police officers and 47 civilians, while 1,440 others were injured. Some 104 pro-coup figures were also killed.
RELATED TOPICS