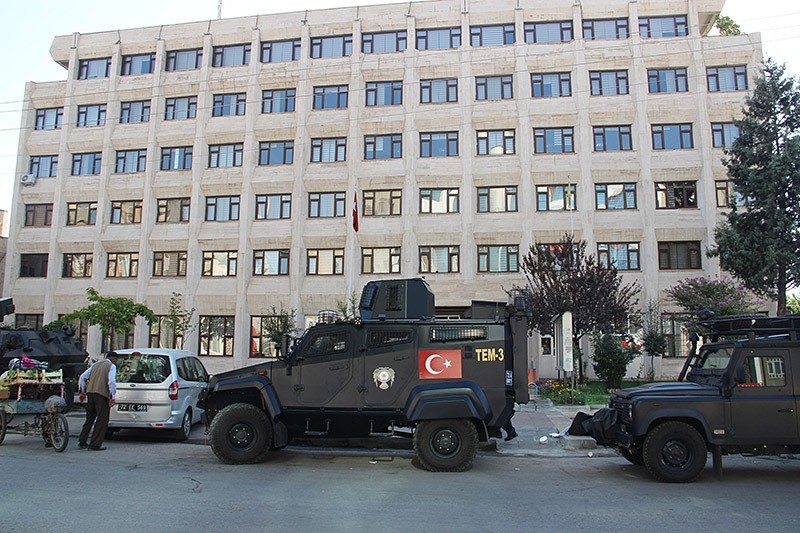 The mayors of 28 municipalities charged with various crimes, including membership of a terrorist group, aiding and abetting a terrorist group and terror financing, were replaced by state administrators early Sunday through a governmental decree.

Justice Minister Bekir Bozdağ, speaking after the publication of the decree, said being elected did not give one the right to commit crimes.

"Turkey will fight terrorism with every tool at its service within the bounds of the rule of law. The aim of the decree is to prevent the use of municipal services in aiding and abetting terrorist groups," he said.

All of those dismissed due to PKK links are from the pro-PKK Democratic Regions Party (DBP), the local wing of the Peoples' Democratic Party (HDP).

The co-mayor of Diyadin in the northeastern Ağrı province, Hazal Aras, was arrested for aiding and abetting a terrorist group. Investigations showed that the resources of the entire municipality, with the tacit support of municipal officials from the very top, was mobilized to help PKK members hiding in the mountains, with regular deliveries of arms, ammunition, food, medical supplies and recruits using municipal vehicles. Some terrorists who visited the town were treated as celebrities, staying in municipal housing. Terrorists were even allowed to order takeaway food, with municipal vehicles delivering the orders.

Since the PKK started to escalate its attacks mid-last year, the DBP municipalities have backed the terrorist group's strategy to create chaos in urban centers across the country's East and Southeast. Municipal vehicles were seen digging ditches to prevent security forces from accessing urban areas under PKK occupation. Such incidents, in Van, Şırnak's Cizre municipality, Derik and Dargeçit municipalities in Mardin, Diyarbakır's Sur municipality and many others resulted in thousands of locals fleeing their homes, mostly due to being pushed out by the PKK's urban militants.

Dozens of municipal vehicles with official license plates have been seized by authorities, who found tons of bomb making equipment and explosives.

In January this year, the police followed up a tip off and searched a trailer towed by a municipal tractor in Dargeçit, Mardin, seizing huge amounts of weapons and ammunition, including seven rocket launchers and several sharpshooters' rifles.

Security measures to counter the PKK's urban warfare were openly contested by municipal vehicles from the Sur Municipality, which dug ditches and built obstacles to prevent the progress of security forces.

Municipal vehicles were even used by suicide bombers, including the attack on Cevizlik Gendarmerie Post in Mardin that killed two soldiers. The vehicle used in the attack belonged to the Mazıdağı Municipality.

DBP municipalities are also known to have channeled funds to terrorists, hiring them as municipal employees and providing them with regular salaries.

Security forces in Van stopped a rental last June, arresting three PKK members who were planning a terrorist attack. It was later shown that the vehicle was rented by the Van Metropolitan Municipality.

Three mayors from the ruling Justice and Development Party (AK Party) and one from the Nationalist Movement Party (MHP) who were replaced for apparent ties to FETÖ, which is responsible for the bloody failed coup on July 15.

The districts in which new administrators were appointed are as follows:

Meanwhile, police started searching the municipality buildings of the Batman province and Sur district of Diyarbakır.