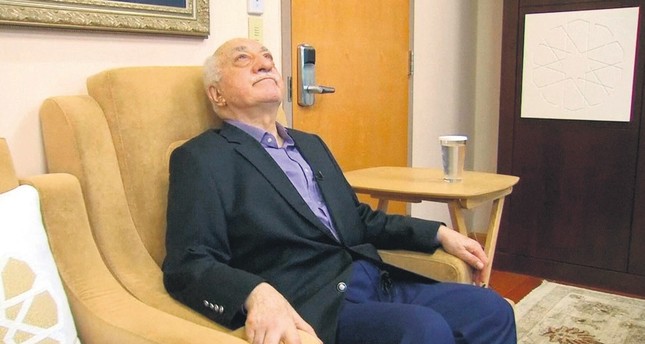 Terror cult leader Fethullah Gülen is the prime suspect in investigations against his FETÖ cult.

Two months after a brutal coup attempt blamed on FETÖ, sympathizers and members of the group from all walks of life are facing new probes as dozens with links to the group were detained in operations yesterday and Tuesday

Having once enjoyed immense clout in the judiciary, the police force and bureaucracy, the Gülenist Terror Group (FETÖ) faces crackdowns almost daily. In a new wave of operations across the country against the group which is blamed for the July 15 coup attempt, police nabbed more than 150 people in the last two days for links to the terrorist group while a large number of suspects with outstanding detention warrants remain at large.

The nationwide crackdown is being conducted on members of the group run by U.S. based former preacher Fethullah Gülen, one of Turkey's most wanted terror suspects in at least three attempts to topple the Turkish government since 2013, when prosecutors, judges and police officers linked to the group tried to implicate ministers in sham trials. The group's latest attempt to seize power came in the form of a military coup allegedly orchestrated by military officers loyal to the Gülenists.

While most of those detained in operations launched Tuesday and Wednesday were civil servants, several business people and the heads of two local bar associations were also detained by police in anti-terror operations. The majority of the suspects were in possession of Bylock, an encrypted messaging app popular among members of the group who value secrecy and use the app to conduct illegal activities, according to security forces.

A total of 141 people were detained in 15 cities on Tuesday as part of the FETÖ investigation carried out by the Kayseri Public Prosecutor's Office. The suspects were identified from their texts on the cryptographic message system Bylock, which were used by FETÖ members for communication, especially during the coup attempt. Meanwhile, the detainee named A.A., who was charged during the investigation in Zonguldak, is, allegedly, the Gülenist network's Kyrgyzstan "imam,"or a point man, relaying Gülen's orders to followers and masterminding illegal activities of the group in the cities they are "appointed" to.

Yesterday, a court in the western city of İzmir ordered the arrest of six suspects detained earlier by police for links to FETÖ. The suspects were members of a non-governmental organization (NGO) and are accused of collecting "donations" in the name of the group.

In the capital city of Ankara, prosecutors interrogated 11 suspects including the staff and columnists of Yeniçağ, a nationalist newspaper, following their detention in an earlier operation.

In the northern city of Tokat, 27 people including business professionals were detained in FETÖ investigations.

In the city of Rize in the Black Sea region, gendarmerie troops detained a suspect identified as M.A., who is accused of being a FETÖ "imam" in the eastern city of Iğdır.

In the eastern city of Siirt, Cemal Acar, head of the city's bar association, was detained along with several prison guards and court clerks accused of having links to the terrorist group.

Along Turkey's northeastern border with Georgia, Hasan Hüseyin P., a FETÖ suspect, was captured by security forces as he was trying to flee the country with a forged passport and a large cache of money. Officials said the suspect was a high-ranking member of the group. Several prominent figures within the group have also fled to Georgia in attempts to evade anti-terror operations which have been launched in the past two years. Among them was Zekeriya Öz, a high-profile prosecutor who was behind the two 2013 coup attempts by FETÖ.

Police also detained fellow officers with links to the group in the cities of Elazığ, Osmaniye, Antalya, Ankara, Düzce, Bingöl and Nevşehir in operations conducted yesterday. Most suspects were users of Bylock and were in possession of notorious one-dollar bills found among almost all suspects detained or arrested in anti-terror operations in the wake of July 15 coup attempt. The bills are believed to be used as a sign for FETÖ members to recognize each other and were personally sent by Gülen to his loyal followers, Turkish media outlets earlier reported.