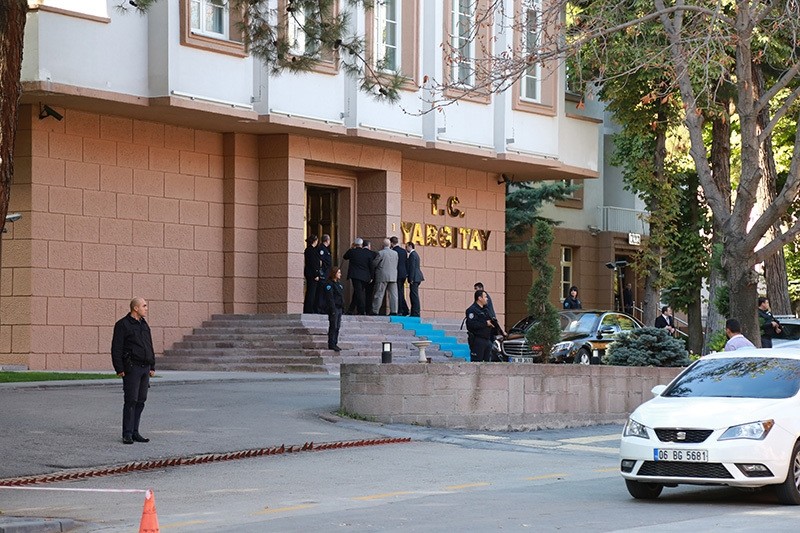 Police units searched the rooms on suspected judges and prosecutors at the Supreme Court of Appeals building in Ankara, Oct. 14, Friday. (IHA Photo)
by Daily Sabah with Agencies Oct 14, 2016 12:00 am

Arrest warrants were issued for 189 judiciary personnel as part of investigations into users of Bylock, the encrypted communication application used by Gülenist terror cult (FETÖ) members on Friday.

Police searched the rooms of suspected judiciary personnel at the Supreme Court of Appeals building and the Ankara Courthouse.

The chief prosecutor in Ankara sought the latest arrests of members of the judiciary at the justice ministry and other courthouses, including judges working at the Court of Cassation, the top court of appeals, and the Council of State, the highest administrative court, Anadolu news agency said.

The FETÖ, which is led by U.S.-based cleric Fetullah Gülen, is blamed for the July 15 coup attempt that killed 241 people who resisted it and around 100 rogue troops, along with some 2,200 wounded.

Turkey's National Intelligence Agency (MİT) identified some 56,000 users of ByLock, which they say Gülen's followers began using in 2014. Authorities have detained hundreds of police and members of the bureaucracy in the past week due to their alleged use of ByLock.

Police detained the prosecutor in charge of the local coup investigation in the central Turkish city of Konya after discovering he used ByLock, Star newspaper reported on Friday.

The Education Ministry on Thursday removed 2,400 teachers from their posts as part of the coup-plot investigation, Anadolu reported. The Turkish Armed Forces sacked 109 military judges on Thursday, the Defense Ministry said.

So far, more than 3,400 FETÖ-linked judges and prosecutors have been discharged by the Supreme Board of Judges and Prosecutors following the coup attempt.