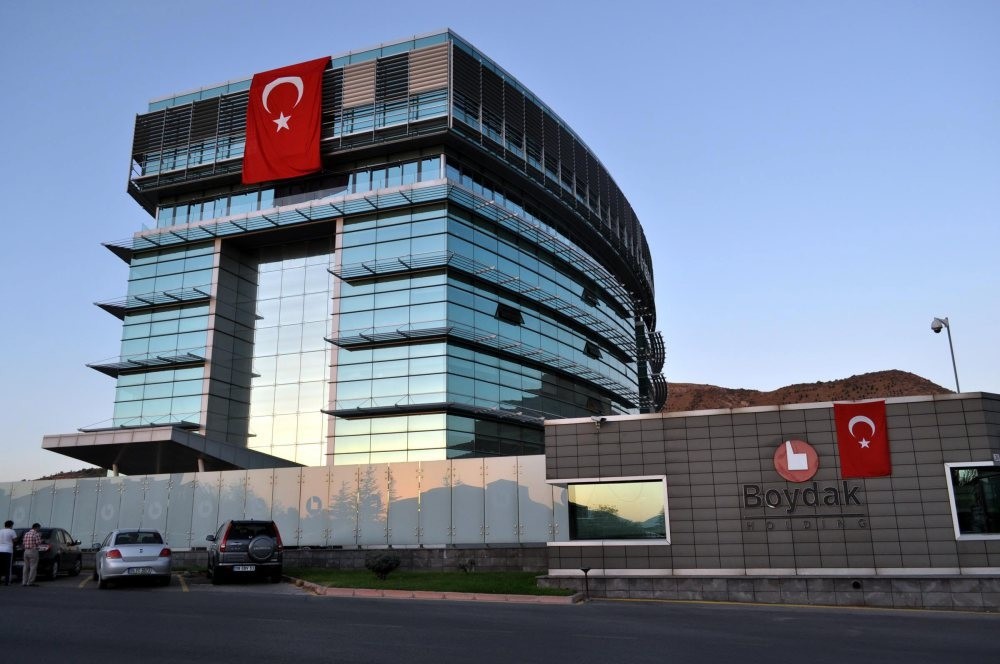 Boydak, a conglomerate with ties to FETu00d6, was handed over to a state authority after its executives were detained for financing the terror cult.
by Hazal Ateş Oct 21, 2016 12:00 am

Boydak, a conglomerate with ties to FETÖ, was handed over to a state authority after its executives were detained for financing the terror cult.

The Gülenist Terror Cult (FETÖ), accused of masterminding the July 15 coup attempt and a string of other crimes, amassed wealth thanks to its business interests often based on money laundering and "forced" donations. Finance Minister Naci Ağbal revealed that the state seized TL 385 million ($128 million) in cash and TL 87 million in the form of checks and promissory notes in the possession of suspects and companies linked to FETÖ in operations in the aftermath of the July 15 coup attempt.

Authorities also shut down 4,482 "institutions" linked to FETÖ and oversaw the handover of 3,361 buildings and lands amounting to 7.2 million square meters to the state, Ağbal added.

FETÖ, which emerged as a national threat in 2013 when its infiltrators tried to topple the government twice, is believed to run a large network of businesses grown thanks to donations from the terror cult's supporters. Although most companies found funneling money to the terrorist group were appointed trustees before the coup attempt, authorities have stepped up seizures in the aftermath of the coup attempt. Naci Ağbal said they froze the assets of more than 1,000 suspects funding the terror cult while emphasized that some suspects were trying to transfer their assets to others in a bid to cover up their links to the cult.

A state of emergency designated to clear the way for a faster legal process against FETÖ has enabled authorities to widen the net on the terror cult. As soon as it went into force after the putsch attempt, authorities sealed off properties of the terror cult and confiscated all cash and assets related to FETÖ's operations.

Finance Minister Ağbal said that some 35 hospitals, clinics, 2,380 private schools, dormitories, 1,156 buildings belonging to foundations and associations, 15 universities, buildings belonging to 31 labor unions, 709 prep schools, 64 TVs and radios, 92 newspapers and magazines were among properties handed over to the state after they were confiscated in anti-FETÖ operations and authorities found these institutions were in possessions of 7.2 million square meters of land. Ağbal also noted that FETÖ-linked companies owed TL 400 million to individuals and other businesses and the state will not cover the debts directly. He said assets seized from FETÖ can be used for the payment of the debts.

Turkey seeks to cut off revenues to the terror cult which heavily depends on "himmet" or donations by its followers or extorted from others by blackmail and detained and arrested scores of prominent business figures linked to the group after the foiled putsch attempt, from Boydak, a leading furniture maker, to the construction giant, Fi Yapı.

Naci Ağbal says Gülenists control a fortune in billions of Turkish lira all across Turkey and they accumulated this wealth not solely by doing business, but by "abusing the good will of the state." He noted most plots owned by Gülenists were acquired from the state either for low prices or for free thanks to FETÖ's infiltrators within bureaucracy cutting off red tape for suspects. He added that the businesses also flourished thanks to "himmet." The minister underlined that companies and financing were among the most important legs of FETÖ investigations and implied more assets can be seized if investigators found more suspects' links to the cult. More than 1,000 banking accounts were also frozen according to the minister, who noted that this included several civil servants, dismissed from duty for links to FETÖ, trying to smuggle money abroad.

Turkey also requested the freezing of the assets and fund inflows into the bank accounts of the terrorist cult from 34 countries of the Financial Action Task Force (FATF) having explained to them the structure and objectives of the terrorist group.

FETÖ's global connections established through shell companies are also being brought to light. Most of these companies have maintained relations with the terrorist group since 2013 while changing the structure of their partnerships by cooperating with foreign partners. Financial maps of these countries are being drawn to reveal their shady-partnership structures.
RELATED TOPICS