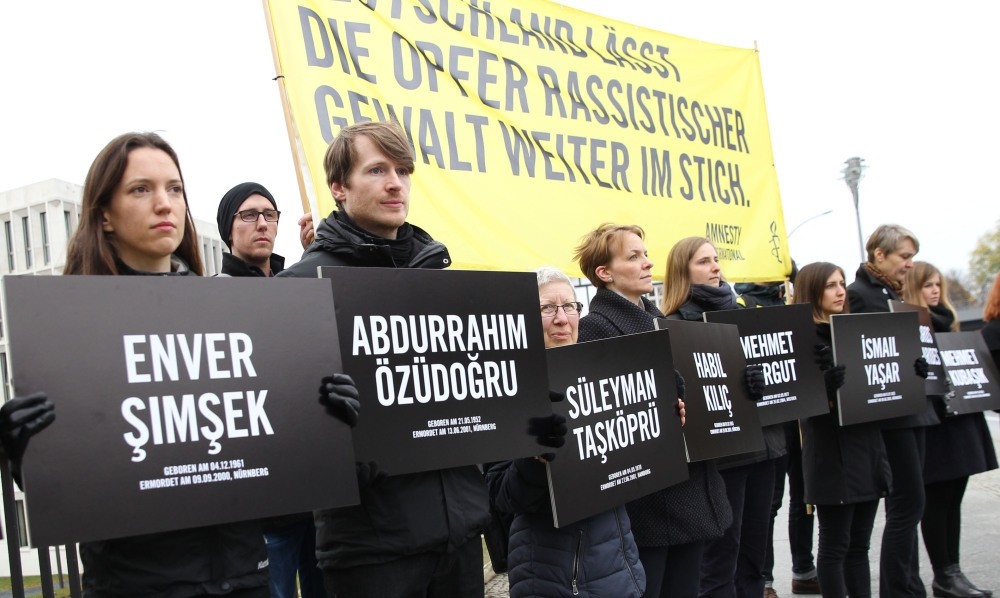 Activists hold banners with the names of the NSU victims during a rally outside the Interior Ministry on Friday.
by Compiled from Wire Services Nov 05, 2016 12:00 am

On the fifth anniversary of the discovery of the neo-Nazi gang NSU responsible for the killing of eight Turks, a German minister offered apologies for failure to investigate the murders while criticism remains in place for the failure to address the links between the state and the gang apparently ignored for years

Friday marked the fifth anniversary of the somewhat accidental discovery of the National Socialist Underground (NSU), a neo-Nazi gang accused of killing eight Turks and a Greek in xenophobic attacks. As the victims are remembered, the German government faces criticism for failure to shed light on the murders in time and reluctance on revealing state agencies' links to the neo-Nazi scene.

Speaking to the German media on Friday, Justice Minister Heiko Maas admitted "failure" for the part of the government and apologized to the families of the NSU victims for "mistakes" by security forces in the investigation and thwarting the string of racist crimes. He said "many mistakes were made" and expressed his regrets in the case. "It is a gross failure that the NSU committed crimes for years and we have not been able to stop them and protect our citizens," Maas was quoted saying, four years after Chancellor Angela Merkel pledged a full investigation into the NSU and its connections yet not "fulfilling her promise" according to critics of German authorities' handling of the case. 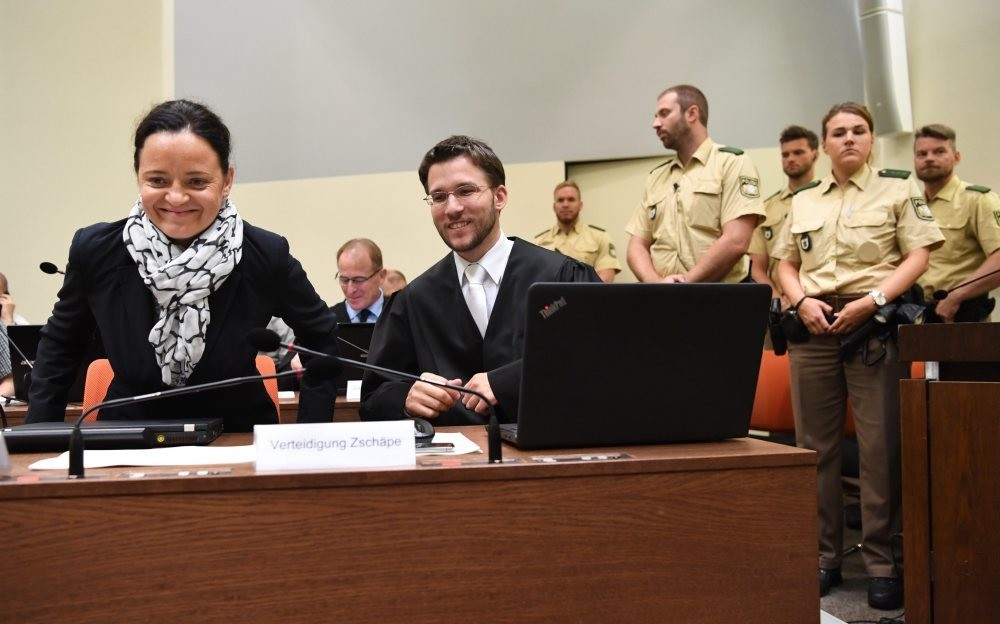 Beate Zschaepe, left, smiles as she sits in the dock during one of the hearings in the NSU trial in September.

The discovery of the NSU's crimes, from the murders of the eight Turks and the Greek to the bombing of a predominantly Turkish neighborhood and a string of robberies, shocked the German public who were led to believe by investigators and the media that the crimes were a result of gang disputes in the Turkish community for years. On November 4, 2011, Uwe Mundlos and Uwe Boehnhardt, two members of the gang, were found dead in an apparent suicide in a torched trailer home in Germany's Eisenach and some three hours later, Beate Zschaepe, another gang member, fled after burning another house where she stayed with Boehnhardt and Mundlos in the town of Zwickau. She turned herself in to police four days later, revealing the presence of the gang. The discovery put an end to the theory of ethnic gang violence in the NSU's crimes which were notoriously dubbed as "döner killings" by the German media named after the popular Turkish food. Zschaepe still stands trial in a lawsuit against the gang expected to wrap up next year. The revelations caused a scandal in Germany for failure of authorities to detect the gang's crimes that took place between 2000 and 2007 and for findings indicating that NSU members had connections to informants on the payroll of German intelligence. The destruction of documents on the said informants following the discovery of the NSU further added to the controversy.

Aydan Özoğuz, the Integration Minister of German cabinet and a member of the Turkish community, said unanswered questions remain in the NSU case and "all relevant agencies" should check whether they succeeded in fulfilling Merkel's pledge to fully shed light on the case. In a written statement, Özoğuz said far-right danger in Germany should never be downplayed.

The focus on the NSU investigation still remains on the gang itself, raising complaints from the victims' families seeking a broader investigation into the involvement of the intelligence services. Seda Başay Yıldız, a lawyer for Enver Şimşek, a 38-year-old father of two who was gunned down in the van of his florist shop while praying on the morning of Sept. 8, 2000, decries authorities' unfulfilled pledges to shed light on the gang. Speaking to Anadolu Agency, the lawyer of Turkish origin said Şimşek's family was disappointed on the process in the case. She said Zschaepe and four other suspects accused of aiding the gang were on trial at a Munich court that was "expected to conclude the case after the trial ends." "They will say the case is resolved and close it. Whereas, these murders cannot be the work of only three people. Their links to the state are still in the dark," she said. Yıldız underlines that they still don't know how the gang picked its victims and how they planned the murders. "Lawyers believe these three suspects were in touch with neo-Nazis in the cities they committed the murders," she said. Yıldız said it was not clear that the state's informants were in touch with Boehnhardt, Zschaepe and Mundlos but despite their repeated appeals, dossiers on those informants were not handed to lawyers. She criticized the prosecutors for denying lawyers access to key information in the case. "We don't want the government to intervene in a judicial process but the Justice Ministry can instruct prosecutors to share the information on the NSU with the lawyers," Yıldız said. "If the state has nothing to hide, then why are they denying access to dossiers? I think the state made big mistakes and was negligent in this case. For instance, intelligence units did not convey what they knew about the case to law enforcement. A lawsuit can be filed for the state's negligence in the case but we need tangible evidence, which we are denied," Yıldız added.

Doris Dierbach, the lawyer for the family of Halit Yozgat who ran an Internet cafe in Kassel when he was gunned down by the NSU at the age of 21 in 2006, said it was difficult to investigate the far-right groups due to their secretive nature. "Some work as informants and can manipulate authorities any way they can. But we still managed to learn that the NSU had support in the far-right scene and did not act alone in their crimes," she said. Dierbach says the discovery of the gang raised awareness to the far-right and racism in German society and showed that there was a need to fight against it.

On Friday, a group of activists laid a wreath at Neue Wache, a memorial in Berlin dedicated to the victims of war and dictatorship, in memory of the NSU victims. Kenan Kolat, a Turkish representative of a nongovernmental organization for multi-cultural living in Germany, said it has been five years since the discovery of the NSU but Germany "did not do anything for this black stain in its history." Kolat also pointed out mysterious deaths of several witnesses in the NSU case and the destruction of documents. "No lawsuits were filed for anyone other than NSU members and we don't have any inquiries about authorities' possible connections on the case," he said.

Turkey is also critical of Germany on the legal process regarding the NSU. Mustafa Yeneroğlu, a lawmaker who heads the Human Rights Committee of the Turkish parliament, said in a written statement on Friday that Germany should do more in the investigation of the gang's crimes and a comprehensive approach was needed. "The lack of attention in the case led to a chain of alleged mistakes. We witnessed strange events, from suspicious deaths of witnesses to destruction of intelligence documents on far-right, to 'memory losses' of officials testifying to interrogators on the NSU," he said. Throughout the NSU trial, at least two witnesses were found dead under suspicious circumstances though authorities ruled out foul play. Melisa M., a woman linked to a neo-Nazi witness tied to the gang, was found dead last year in her home, and two years before, another witness died under mysterious circumstances. Thomas R., another witness who was reportedly an informant for German intelligence, died of previously undiagnosed diabetes in 2014.

Yeneroğlu said law enforcement lagged behind investigative journalists in uncovering the NSU's crimes and judges and prosecutors exerted little effort to find those linked to the gang. "There are enough clues pointing that the NSU had more than three members and it is necessary to revise the trial process and investigate the dire mistakes during the handling of the case," he said. Yeneroğlu said negligence for the part of German authorities paved the way for more Islamophobic and xenophobic attacks. "The result of a comprehensive investigation in this case will determine how Germany's image in handling such cases will be in the future, especially in the light of Germany's unrealistic warnings on alleged human rights violations in Turkey," Yeneroğlu said.
RELATED TOPICS