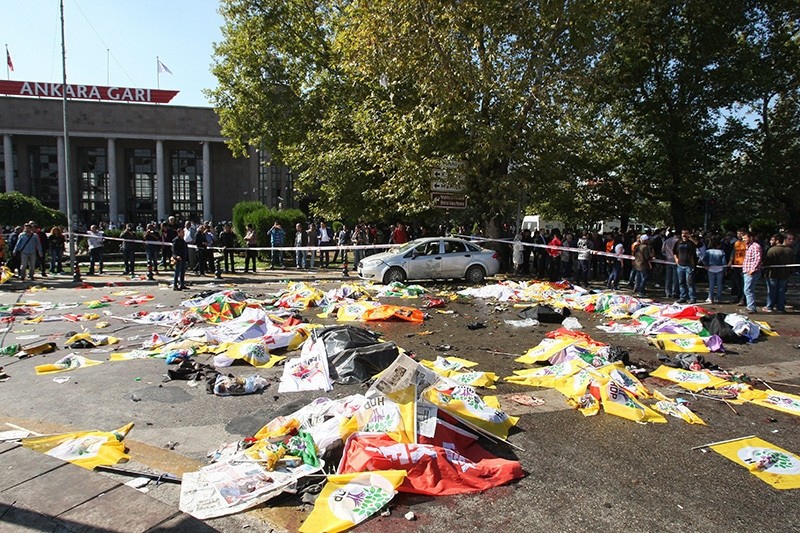 One year after two suicide bombers blew themselves up among a crowd in capital Ankara and killed more than 100 people in the worst Daesh attack in Turkey, a trial of suspects began on Monday.

Thirty-six suspects appeared before a court in Ankara amid tight security measures. Defendants who face terror and murder charges that carry multiple life sentences for the bombings that targeted the crowd gathered for a "peace rally" near the city's main train station on Oct. 10, 2015. The demonstrating crowd was mainly composed of supporters of the Peoples' Democratic Party (HDP), which is affiliated with the PKK, another terrorist group, and supporters of far-left groups, in addition to delegations from Republican People's Party (CHP) youth organization and left-wing unions. 103 people were killed and more than 400 people were injured in the twin blasts.

In the first hearing where the families of victims filled the courthouse and shouted "killers," 10 lawyers appointed by the local bar association to defend the suspects, announced they have withdrawn from the case. Riot police in body armor amassed around the courthouse for the highly sensitive case that highlighted the threat Daesh presents to Turkey.

Since it rose to prominence in Iraq and Syria, Daesh has repeatedly threatened Turkey with attacks and carried out a string of suicide bombings in the country neighboring Syria and Iraq. In June, 47 people were killed in the bombings at Istanbul's Atatürk International Airport and an August attack targeting a street wedding in Gaziantep in the southeast killed 57 people, 34 of them children

Turkey has stepped up its crackdown on the terrorist group following the attacks, targeting sleeper cells in Ankara, Gaziantep and other cities.

Two suicide bombers in the October 2015 attack were identified as Yunus Emre Alagöz, a Turkish national and an unidentified Syrian.

Yunus Emre Alagöz was the brother of Abdurrahman Alagöz, the Daesh suicide bomber who blew himself up on July 20, 2015 attack in southern town of Suruç, killing 32 people from far-left groups affiliated with the HDP who waiting to cross into YPG-held Syrian town of Kobani. In addition to the bombing being one of the latest events before the undeclared ceasefire between the PKK and Turkish government that collapsed two days later, the government was also bitterly criticized for failing to identify and capture Yunus Emre Alagöz after his brother was affiliated with such an attack. Before Suruç bombing, Daesh also targeted an HDP rally in Diyarbakır on June 5, just two days before the June 7 general elections.

Only 14 defendants were present at the courtroom while others attended the hearing via VideoLink. All defendants are Turkish citizens, with the exclusion of a Kazakh suspect. Several of the suspects face multiple sentences of up to 11,750 years in prison each on charges of murder and seeking to change the constitutional order. Some defendants face lesser prison terms, up to 22 years, for membership in Daesh. Mehmet Kadir Cebael, one of the defendants, blew himself up when anti-terror police cornered him in a house in the city of Gaziantep last month. Three police officers were killed in the explosion. Some suspects still remain at large.