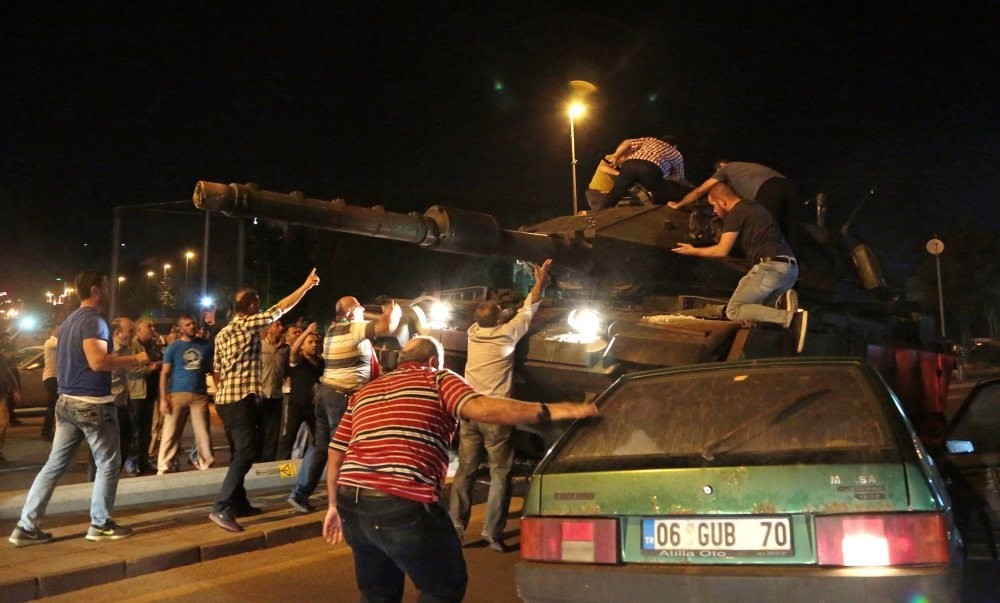 The July 15 coup fended off by the public confronting tanks and heavily armed soldiers is blamed on Gu00fclenist terror cult which activated its loyalists in the army to seize power.
by Compiled from Wire Services Nov 25, 2016 12:00 am

As more and more Gülenists are confess their role in the July 15 coup attempt, a general, who claims to be a "former" Gülenist, has confessed that a fellow officer accused of holding the military chief hostage, had assigned him a role in the coup one day before the FETÖ-linked junta tried to overthrow the government

As Turkey relentlessly pursues those behind the bloody coup attempt on July 15 that claimed 246 lives, more and more people linked to the coup invoke have been invoking a legal clause to confess their role in the coup, to avoid hefty prison terms.

One of them was Brigadier General Abdülkerim Ünlü, detained on the night of the attempted coup when military officers linked to the Gülenist Terror Group tried to topple the government and kill the president. Now, in exchange for a lenient sentence, Ünlü, who describes himself as a "former" member of FETÖ, has admitted his connection to the coup officers and gave information on his meeting with a senior officer who had assigned him a role in the coup.

The detained military officer told interrogators that Mehmet Partigöç, an officer of the same rank as his, met him in the capital Ankara on July 14 and handed him orders for the coup and his presumed role.

Partigöç was heading the Personnel, Planning and Management Department, a key post at the Chief of Staff office, when he was detained for the aiding coup attempt. He was reportedly among officers holding Chief of Staff Gen. Hulusi Akar hostage at a military headquarters in Ankara. Partigöç, however, has denied any involvement in the coup attempt.Abdülkerim Ünlü was commander of a military unit in the eastern province of Tunceli during the coup attempt and was captured in Elazığ, another eastern province, where he arrived after he traveled from Ankara on July 15. Ünlü said he was on a leave when he traveled to Ankara and met Partigöç.

"He gave me several documents. One was a written order showing I would be appointed as commander of Elazığ after martial law was established and the another document had the names of the military personnel I would command," he said.

Meanwhile, Ünlü has applied twice to invoke the "remorse law" that might allow defendants to have their sentences reduced in exchange for providing information on the terrorist group, afterward however, he withdrew his confession. He claimed he broke ties with FETÖ years ago.

While police were carrying a search of his possessions, officers found a note reading "destroy the file in my room" and discovered the file mentioned in the note hidden inside an air conditioner in his room at the military lodgings. The file had documents allegedly given by Partigöç and helped police detain dozens in Turkey's Elazığ, who were linked to FETÖ and would work with Ünlü following the putsch attempt.

Ünlü was captured by Yılmaz Uyar, commander of a military garrison in Elazığ. Uyar told police before handing him over, that Ünlü had tried to hold him hostage on the night of the coup.

FETÖ has already been implicated in two more coup attempts back in 2013 with the help of police, prosecutors and judges loyal to the cult leader Fetullah Gülen. The terror group shocked Turkey on July 15 when military officers with ties to Gülen tried to seize power.

Gülen denies links to the coup attempt but testimonies of military officers, from low-ranking sergeants to top military brasses arrested after the foiled putsch attempt points to his and his followers' role in the coup.Officers have given extensive information about their ties to the terror cult, starting as early as in their childhood and how they were instructed by their "brothers" in the cult to topple the government through a coup. Lucky that attempt was defeated all in thanks to a strong public resistance.
RELATED TOPICS