Assassin who tried to kill President Erdoğan on July 15 turns on FETÖ, collaborates with police 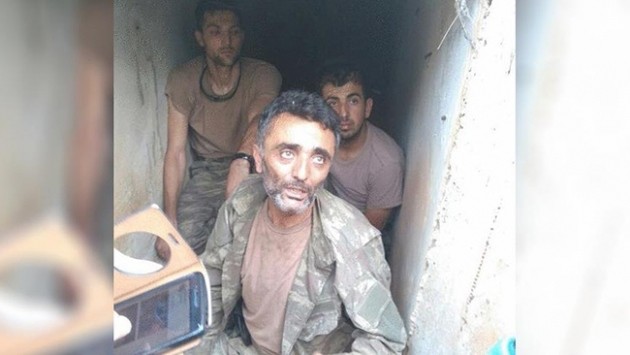 Zekeriya Kuzu and other putschists were captured 11 days after assassination attempt targeting President Erdou011fan.
by Daily Sabah with DHA Nov 26, 2016 12:00 am

Zekeriya Kuzu, a sergeant, who was among the elite troops linked to FETÖ sent to kill the president during the July 15 coup attempt, expressed his regrets for joining the terror cult and turned against fellow Gülenists by helping police to capture suspects

Immortalized among images of post-coup Turkey was Zekeriya Kuzu, a man in military fatigues staring at troops that captured him from the empty water canal where he was hiding with fellow soldiers. After the July 15 coup attempt, during which he and other elite troops tried to kill President Recep Tayyip Erdoğan in the summer resort where he was staying, Kuzu has been helping Turkish police to capture suspects in operations against the Gülenist Terror Group (FETÖ), which has been blamed for the coup.

The officer is among many pro-coup soldiers who confessed to their links to the terror cult and invoked a remorse law for a reduced sentence.Although he dismissed allegations in his initial testimony, Kuzu was called "pasha" (general) among other Gülenist officers of higher rank during his time at an air base in the western city of İzmir, according to media outlets. It is further claimed that he was an "imam" or point man for the cult that supervised fellow Gülenists in every rank in the army.

Police in İzmir, where Kuzu was held in prison, occasionally enlisted Kuzu's aid in capturing those involved in the coup attempt and those with ties to the terror cult, led by U.S.-based former preacher Fetullah Gülen.

On the fateful night of July 15, a group of elite soldiers with links to the terror cult were dispatched to a hotel in Marmaris, a coastal-Mediterranean town where the president and his family were vacationing, with the purpose of killing or capturing him alive. Erdoğan and others managed to escape at the last minute after discovering that a coup was unfolding across Turkey. Kuzu and others had flown by helicopter from the Çiğli military base in Izmir and stormed the hotel, killing two police officers guarding the place in the process. Many members of this 37-man team of troops were captured after days spent hiding in the countryside, and an investigation revealed that Kuzu and Gökhan Şahin Sönmezateş, a brigadier general, masterminded the plot to attack Erdoğan. Kuzu confessed to handpicking each soldier in the assault team. He and fellow soldiers were captured 11 days after the assault thanks to an intense manhunt.

In his initial testimony, Kuzu told the interrogators that he was introduced to the terror cult in 2005, while he was deployed in the central city of Konya. He is a rarity among FETÖ-linked officers, who are mainly recruited at an early age, even before their admission into military schools. Several officers have acknowledged "brothers" or FETÖ members overseeing their recruitment and instructing them to join military schools and even supplying questions and answers for admission exams in a bid to boost the terror cult's infiltration into the army.

Like other officers loyal to the cult, Kuzu was assigned a "brother." In line with the secrecy among Gülenists, Kuzu says he never knew the real identity of this "brother," but regularly met him and later met another Gülenist who introduced himself simply as "Tahir." From time to time, Kuzu supplied crucial information about military activities to the "brothers." "I was in charge of other sergeants at the base, and when I was instructed by my superiors to redeploy any personnel, I was asked the opinion of the 'brother' and would assign a name he suggested instead of the listed personnel," he confessed.

The sergeant claims he found out about the FETÖ membership of other officers involved in the assassination attempt when they were in hiding in Marmaris. "Captain İsmail [a Special Forces officer implicated in the coup attempt] asked the team, 18 soldiers, if there was anyone among them not a member of the Hizmet (Service) Movement. No one objected," he says, referring to the name FETÖ members call themselves. He acknowledged that although he was aware other officers' memberships in the cult, utmost secrecy made it difficult for members to recognize each other.
RELATED TOPICS